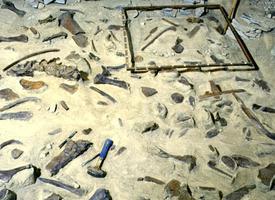 Bonebeds are notable accumulations of modern or FOSSIL bones and teeth from more than one individual that occur in a geologic stratum or on the surface of the ground. Although modern bonebeds are common, the term is most often used in reference to ancient occurrences, in particular, fossil bones of large animals such as DINOSAURS and MAMMALS. Bonebeds are often prized by palaeontologists and geologists because of the unique opportunities they represent to add to our understanding of palaeobiology, palaeoecology and geology. Bonebeds from different time periods are known to occur in various parts of Canada, including Alberta, Saskatchewan, British Columbia, the Canadian Arctic and Eastern Canada, but the most abundant and well documented bonebeds are those in Alberta that contain Cretaceous dinosaurs and other fossil vertebrates that range in age from 66 to 80 million years. Dinosaur bonebeds in Alberta are uniquely famous because of their football-field sizes, the thousands of fossils they contain, and the unique palaeobiological information they yield.

Alberta's bonebeds have been classified using two primary criteria: (1) the sizes of the bones they contain (macrofossil versus microfossil); and (2) whether a bonebed mostly contains the remains of one kind of animal versus many different kinds (monodominant and monotaxic versus multidominant and multitaxic). In general, Alberta's microfossil bonebeds are taxonomically diverse and were formed by the gathering action of flowing water in ancient streams or by floodwaters sweeping the floodplain. Because of their diverse taxonomic content, microfossil bonebeds are one of the most important sources for palaeontologists to reconstruct Alberta's ancient faunas. For example, studies of 75-77 million-year-old microfossil bonebeds at DINOSAUR PROVINCIAL PARK (near Brooks, Alberta) reveal that ancient faunas from this area often consisted of more than 75 different species of vertebrate animals (including fish, salamanders, frogs, turtles, lizards, snakes, crocodiles, dinosaurs, birds, pterosaurs, and small marsupial mammals). The bonebeds further inform us that these ancient faunas were well adapted to a combination of aquatic, wetland, and terrestrial conditions. Microfossil bonebeds are relatively easy to sample, and many hundreds have been studied so far. Studying microfossil bonebeds requires bagging up the fossil-rich sediment, removing the sediment by washing and screening, and then picking the fossil residue (usually under a microscope) for identification and statistical analysis.

Although quite numerous, Alberta's macrofossil bonebeds must be excavated by hand in the field. Because they require more time and considerably more effort to excavate, fewer sites have been studied than is the case for microfossil bonebeds. Nonetheless, during the past 30 years approximately 50 dinosaurian macrofossil bonebeds have been excavated and/or studied in Western Canada. Among these, the most famous include the ceratopsian (horned) dinosaur bonebeds at Dinosaur Provincial Park, Hilda, and Grande Prairie; the hadrosaur (duck-billed) dinosaur bonebeds in Edmonton and Drumheller; and the Albertosaurus (meat-eating) dinosaur bonebed at Dry Island Buffalo Jump. All of these are monodominant bonebeds that are overwhelmingly dominated (> 85%) by the scattered skeletal remains of one species of dinosaur. Dinosaur Provincial Park also contains many hundreds of multitaxic macrofossil bonebeds, but so far only two of these have been systematically excavated.

Systematic study of Dinosaur Provincial Park's ceratopsian bonebeds was begun in the late 1970s by crews from the Provincial Museum of Alberta under the direction of Phil CURRIE. Large collections of skull bones from juveniles to adult individuals at these sites have enabled palaeontologists to document the pattern of growth in ceratopsian dinosaurs in general, and have helped quantify morphological variation in these dinosaurs. Studies of these sites in the early 1980s also resulted in the first scientific hypothesis proposing that some dinosaurs (in this case centrosaurine horned dinosaurs) were gregarious and migrated in herds, similar to modern caribou and some African ruminants. Subsequent work at the HILDA MEGA-BONEBED by the ROYAL TYRRELL MUSEUM has shown that the size of these dinosaur herds numbered comfortably in the high hundreds to low thousands, and that death and burial resulted from large tropical storms that flooded large regions of the ancient coastal plain that once occupied southern Alberta.

Work at the Pipestone Creek bonebed near Grande Prairie showed that the ceratopsian dinosaur that dominates that site is a new taxon, Pachyrhinosaurus lakustai. Ongoing work in that same area has shown that there are other pachyrhinosaur bonebeds at different geologic horizons, suggesting huge potential for future high resolution biostratigraphic and evolutionary studies.

The most recent and significant bonebed discovery is that of the Albertosaurus bonebed at Dry Island Buffalo Jump Provincial Park, near Big Valley, Alberta. The site, originally discovered by Barnum Brown in 1910, was largely ignored until 1997 when it was relocated by Phil Currie, then at the Royal Tyrrell Museum. Subsequent study of the site during more than 10 years has shown that a group of at least 12 large, carnivorous dinosaurs (tyrannosaurids) perished at the site, likely due to a storm/flood event. However, because the site is unique world-wide in preserving a large number of tyrannosaurid dinosaurs, scientific opinion remains divided about whether the bonebed is evidence for normal cooperative behaviours in tyrannosaurid dinosaurs, or simply the result of an environmental catastrophe (a flood) that forced the animals together just before their deaths.