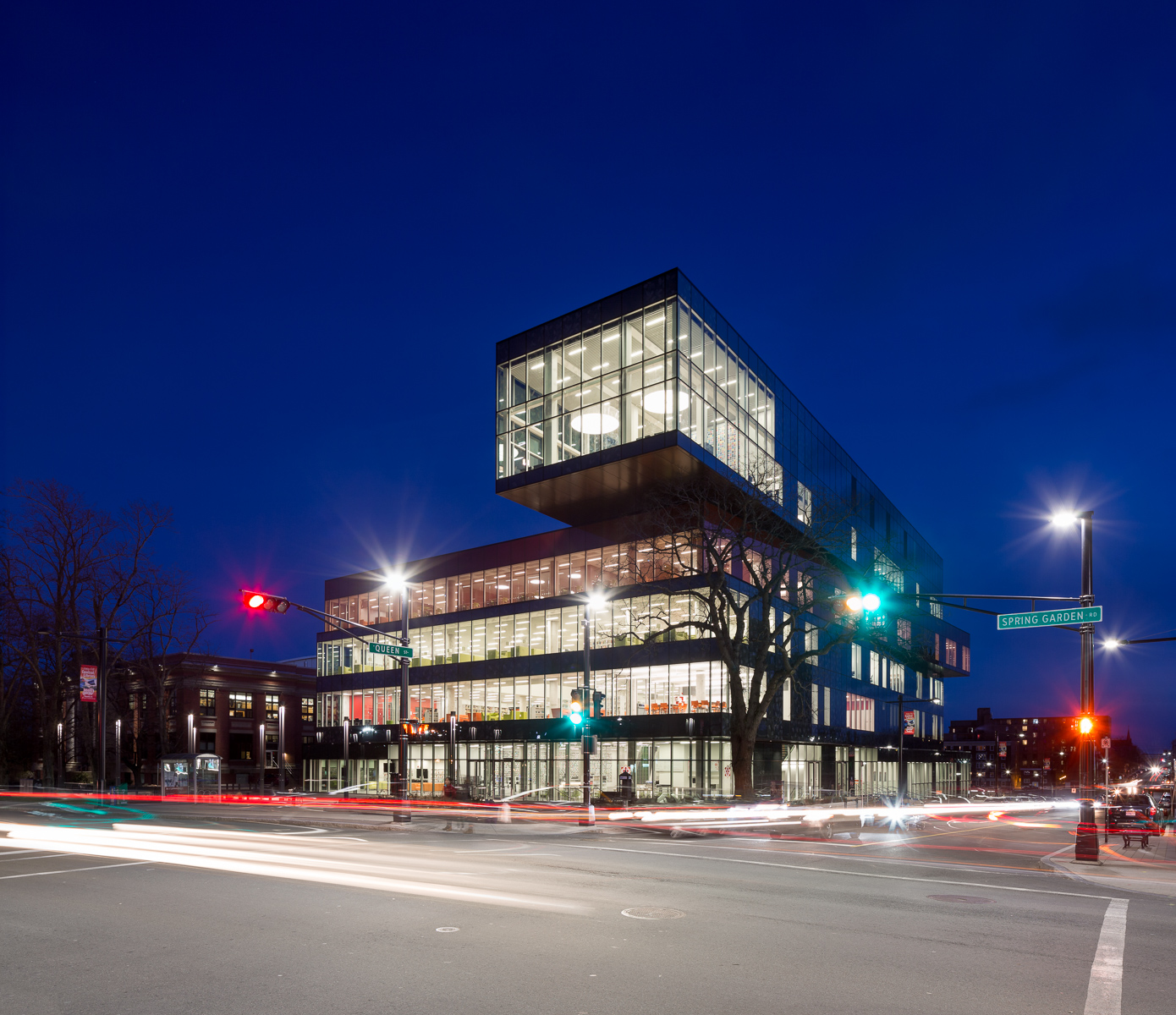 View of the library from the street. 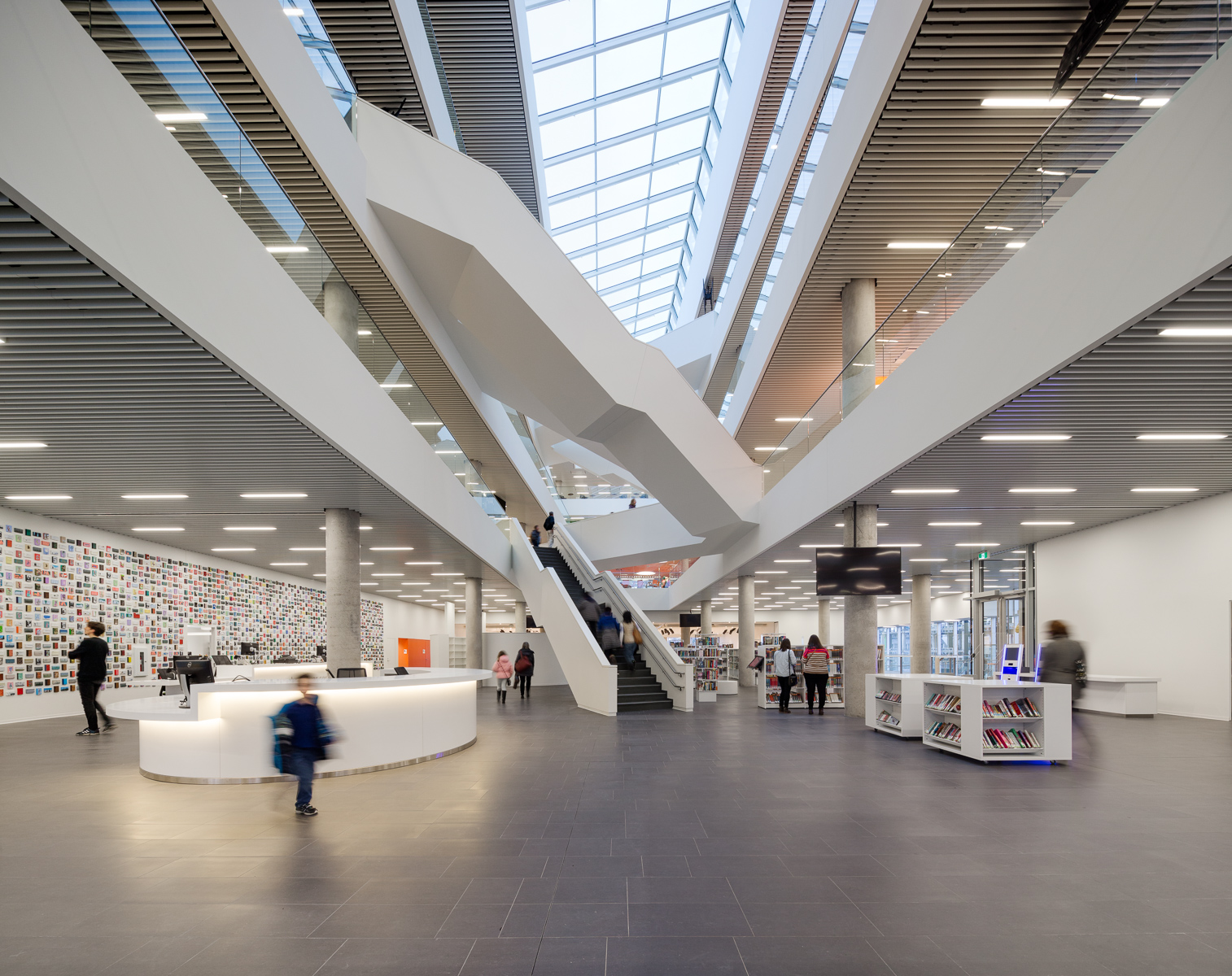 FBM has been responsible for the design of many public, institutional and private sector buildings. These include recreational and healthcare facilities, office buildings, banks, hotels, shopping malls, residential projects, interior renovations, historic restoration, industrial facilities and specialized training facilities. The firm also developed a long-standing relationship with Dalhousie University, and amongst many others, the firm completed one of the university’s most significant projects, the Mona Campbell Building. In 2014, they completed one of Nova Scotia's most ambitious projects, the Halifax Central Library.

The firm’s architectural philosophy focuses on creating designs that embrace, enrich and merge with their surroundings. FBM avoids mimicking historic designs, and rather focuses on modern interpretations of history, using contemporary materials and forms but with sensitivity towards the surroundings of the building. Currently in its fifth generation, the company’s principals are President George Cotaras and Vice President Wayne Duncan, architect Susan Fitzgerald, and project managers Mark Gammon and Craig Davidson, as well as lead architect Matthew Jarsky.

Wayne Duncan graduated in architecture from the Nova Scotia Technical College (now Dalhousie University) in 1980. Duncan started his career with Fowler Bauld & Mitchell. He has been involved with all of the firm's largest and most complex projects.

Architect Susan Fitzgerald joined Fowler Bauld & Mitchell in 2003. Originally from England, she is both a registered architect and an interior designer. She began her architectural career in Vancouver working for Arthur Erickson. Her work focuses on specifics of place, community and a sustainable, integrated approach to design. She teaches design at Dalhousie University’s Faculty of Architecture.

Lead architect Matthew Jarsky completed his studies in architecture at Dalhousie University in 1996 following undergraduate studies at the University of Toronto. After working for firms in both Toronto and Halifax, he joined Fowler Bauld & Mitchell in 2004. Jarksy has a keen interest and knowledge in sustainable design and building practice. A principal in the firm since 2011, he is a LEED (Leadership in Energy) Accredited Professional and has been involved in the design of several buildings aiming for LEED certification.

The Computer Science Building was the result of a merger of Dalhousie University and the Technical University of Nova Scotia. The building had to make several groups work as one integrated whole and facilitate the multidisciplinary research view of the university. It was cited in the 2010 Lieutenant Governor Award.

The project is the first LEED Silver certified school in Nova Scotia. To achieve that goal, efficiency in the use of water and energy became part of the program. For example, all non-potable water comes from the collection of rainwater. .

The winner of an architectural design competition, Citadel High School was designed to replace the two existing high schools in downtown Halifax. It is nearly three football fields long and almost 200,000 square foot in area. The 780-seat Spatz Theatre was completed in February 2011, in time for the Canada Winter Games. In 2010, the building was cited in the Lieutenant Governor Award.

Located at the intersection of two main streets, the building interacts with the university campus and the surrounding residential communities. It is a diverse building, housing four departments: Dalhousie University College of Continuing Education, School of Social Work, Faculty of Computer Science research space and the College of Sustainability. It won the 2012 LEED gold award and the 2010 Lieutenant Governor Award.

Located in the Burnside Industrial Park in Nova Scotia on a flat site with few defining natural features, the building has adopted a layered approach to the architecture and uses nature to separate and conceal the diverse functions within the two spaces it contains. Covered in a number of architecture magazines, it had won the 2012 Lieutenant Governor's Design Awards in Architecture.

This award-winning golf lodge is influenced by the history of Inverness, a mining town, and the landscape that surrounds it. While the new use of the land is completely different to its industrial heritage, the architecture resonates, not only with its new use as a world class golf resort, but also remembers its historic past. In 2013, it was given the Air Canada enRoute Hotel Design Award for Best Overall Architecture and mentioned in the New York Times. It has also received an honourable mention in the 2012 Lieutenant Governor awards.

The new Halifax Central Library is situated in a prominent position in downtown Halifax. It is the most significant public building to be built in Halifax in a generation, designed in collaboration with Schmidt Hammer Lassen Architects: a highly regarded Danish firm with a reputation of creating sustainable and innovative public buildings. The striking architecture is characterized by the fifth floor's cantilever over the entrance plaza, a central atrium criss-crossed by staircases, and the building's transparency and relationship to the urban context. The library won a Lieutenant Governor’s Design Award of Merit in Architecture for 2014.