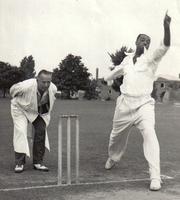 Frederick James Heather, cricket player, umpire (b at Godalming, England, 27 January 1890; d at Toronto, Ont 22 February 1976). Fred Heather's introduction to cricket started in England. As a boy, he put up score tins for the Broadwater C.C. (C.C. stands for CRICKET club), learning the game and eventually captaining a team in Cobham, Surrey in 1916. Immigrating to Canada in 1921, he continued to play the game and was a member of the St. George's C.C. that won the Toronto Championship in 1922 and the Bell Telephone C.C. Toronto Champions in 1927.

Upon retiring as a player, Fred Heather embarked on a career as a Canadian cricket umpire. His first international experience came when the Toronto C.C. faced the Bermuda Wanderer's C.C. in 1931, marking Bermuda's first visit to Canada.

Held over three days, the 1951 M.C.C. Tour made history as the inaugural First Class status cricket match ever held on Canadian soil. The 1959 M.C.C. Tour commemorated the centennial anniversary of England's first cricket team to visit Canada. On the national level, Heather umpired in numerous inter-provincial and John Ross ROBERTSON matches for the national title. He also umpired in more than 1000 consecutive matches without missing an assignment.

In addition to umpiring, Fred Heather contributed to the future success of cricket in Canada in numerous roles. He was both Secretary and player for the St Georges C.C. and the Yorkshire C.C. in 1922 and 1926 respectively. He became a founding member and the fist Secretary-Treasurer for the Toronto and District Cricket Umpire's Association in 1931. In 1935, he became the first Secretary of the newly formed Umpire's Control Board. Caring about cricket's future, Heather started a school for cricket umpires, attended by umpires and players. As principal and professor of the Cricket Umpire's School, Heather set the curriculum to ensure a high standard of officials for future Canadian cricket matches. He was instrumental in starting a junior cricket league in Toronto, resulting in the formation of 18 junior cricket clubs in 1931. Heather was the Secretary for the new Toronto Junior Cricket League. This league provided cricket for 300 junior players each season. In 1933, two junior teams from this league were the first to play cricket at the CANADIAN NATIONAL EXHIBITION. Lastly, Heather authored numerous newspaper and magazine articles, increasing awareness and support for Canadian cricket.

Heather was a Canadian cricket umpire of high caliber for 38 years until his retirement in 1967, making him the longest-serving umpire in Canada. Recognizing Fred Heather's achievements, the High Commissioner for Canada requested the honour of his company to attend the ceremony in Westminster Abbey to commemorate Canada's Centennial. As one of the first Canadians to be a member of the Association of Cricket Umpires (ACU) of England, he earned "Full Member Status on 7 June 1968.

The cricket community lost a legend when Frederick Heather died in 1976. He transformed Canadian cricket by giving youth a league to play in, a school for umpires to learn in, and holding cricket to a higher standard through his consistent actions to serve the sport.

In 2009, Sport Ontario recognized Heather with the Syl Apps Special Achievement Award in recognition of a distinguished contribution to the field of amateur sport in Ontario. In 2010, Frederick Heather became only the ninth person to be awarded the Jack Kyle Development Award from Cricket Canada for outstanding Achievement in fostering the growth and development of cricket in Canada. Internationally, the US Cricket Hall of Fame inducted Heather in 2010, honouring him for meritorious and generous contributions to the sustained growth of cricket in Canada. Heather's story was also added to the Pier 21 Canadian Museum of Immigration in Halifax, Nova Scotia.