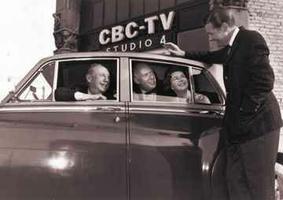 Beginning in 1957 as a summer replacement quiz show, Front Page Challenge ran for 38 years, ending in April 1995. The show attracted well-known guests from around the world, most of whom were in the news at the time. Shown here in the 1960s are regular panelists Gordon Sinclair, Pierre Berton, and Betty Kennedy, along with the host Fred Davis (standing).

Front Page Challenge (FPC), the CBC game-interview TV program, was the longest-running of its kind in North America. Intended as a 13-week summer replacement for The Denny Vaughan Show, FPC first aired 24 June 1957. The show's format, created by John Aylesworth and Harvey Hart, required panelists to identify a mystery challenger, who represented - and was often the central figure in - a major news story. Over the years, challengers included six Canadian prime ministers, most provincial premiers of the day, and such diverse personages as Indira Gandhi, Sir Edmund Hillary, Eleanor Roosevelt, Martin Luther King, Gordie HOWE, Igor GOUZENKO and Mary PICKFORD.

Beyond the impressive guest list, the show offered a distinctively Canadian interpretation of national and international events. Its base in entertainment rather than public affairs programming allowed it unusual latitude and fostered a unique credibility. The regular panelists - for many years Gordon SINCLAIR, Betty Kennedy and Pierre BERTON - built a reputation for intelligence and unedited spontaneity and, along with moderator Fred Davis, became national celebrities (Kennedy succeeded Toby Robins in 1962, while Allan FOTHERINGHAM replaced the deceased Sinclair in 1984). Toronto-based FPC toured most Canadian cities from St John's to Victoria to Yellowknife, always playing to sold-out houses.

FPC's final episode aired on 10 February 1995 and the program was cancelled officially by the CBC on 13 April 1995. In its final half-decade the show averaged 550,000 viewers, down from nearly 2 million in 1978. FPC fell victim to a rising number of new networks and talk shows that competed with CBC's programming, along with numerous other factors, such as the program's aging panel and viewer demographics, irregular schedule rotation, and rising costs of production.