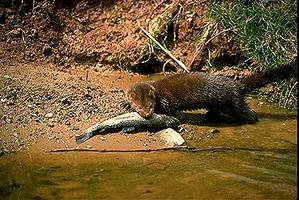 The mink is the most valuable Canadian furbearer (Corel Professional Photos).

For thousands of years, indigenous peoples trapped fur bearers for clothing and trade with other groups. When the first Europeans arrived in what is now Canada, many of them subsisted on fur trapping and the Fur Trade became a major economic activity, for both indigenous and non-indigenous peoples. For centuries, different species of fur bearers were trapped in their natural habitat; fur trapping is still practiced today.

Starting in the late 1880s a new industry developed in Canada, as animals of various species began to be bred in captivity for their fur. Foxes were first farmed on Prince Edward Island. In 1913, the Island counted 277 fox farms and by 1923, there were 448. Fox pelts were very fashionable among women in the 1920s. At the time, the price of a scarf made of a single pelt ranged from $350 to $1000.

Other species of fur bearers that were farmed included the mink, raccoon, marten, and lynx. Up to the 1910s, fur farming was mostly practiced in the Maritime Provinces, but the industry rapidly developed in Ontario and Quebec and a few isolated fur farms could also be found in the Western provinces. Today, fur farms in Canada are mostly located in Nova Scotia, Ontario, British Columbia, Newfoundland and Labrador, Prince Edward Island and Québec. Fur farming requires much work and dedication. Animals must be cared for, fed and watered every day and they need special housing facilities and a balanced diet for good fur quality and health.

Sale by public auction is the principal method of selling fur. There are two auction houses in Canada. The North American Fur Auction in Toronto is the world's third largest auction house. Canada is also one of the main centres for processing and manufacturing furs. Canadian manufacturers are renowned for wild fur garments.

Canadian fur farmers operate under provincial and territorial legislation and Codes of Practice covering animal welfare. The Recommended Codes of Practice for the Care and Handling of Farm Animals, including mink and fox, was developed by Agriculture Canada in collaboration with the Canadian Federation of Humane Societies.

Mink is a medium sized member of the weasel family (Mustelidae) and was first raised in captivity during the Civil War in Lake Casadacka, New York. First mink farming attempts in Canada took place during 1866-87 by Patterson Bros in Richmond, Ontario.

Mink are aggressive animals and must be handled with care. They bite readily and are handled with thick leather mitts. Adult mink are housed in individual wire mesh pens whereas it is a common farming practice to house 2-3 kits together until adults. Mink barns (or sheds) are not heated or insulated and the animals are reared under natural daylight and temperature conditions, protected from direct sunlight and wind. The mink are provided with a nest box with bedding year round.

The mink is a carnivore and requires a meat-based diet. The most common ingredients in mink diet are fish filleting waste, by-products of poultry processing and slaughterhouse offal. The diet also includes cereal, vitamins and minerals. In the main mink farming areas, such as Nova Scotia and Ontario, feed is prepared in central feed kitchens or on farm.

Breeding of mink takes place during February-March and there is only one breeding season per year. In the mink, ovulation is induced by mating and the length of pregnancy varies between 39-75 days due to delay in the implantation of the fertilized eggs. The female gives birth to a litter of 1-12 kits during April-May and nurses for about 6 weeks. The kits are weaned in June. Winter fur development begins in August and the fur is fully developed (prime) in November-December. The fur is harvested when prime.

At the time of pelting, the mink are killed using carbon monoxide gas. The skin is removed and the subcutaneous fat layer on the skin is removed. The skin is then drummed in sawdust to further remove fat and clean the fur before stretching it onto a drying board. The dried skin is called a pelt. Pelting and pelt processing is commonly done in custom pelting facilities. Mink furs come in many natural colours, such as Black, Mahogany, Pastel, Demi Buff, Aleutian (Iris), Sapphire and White.

The processed pelts are shipped to an auction house for fur quality grading which sorts them into bundles of similar characteristics. The pelts are sold in international fur auctions, where buyers from all over the world come to bid for the furs. The pelt price is determined based on the supply and demand of furs and varies from one year to another. In Canada, approximately 2.5 million mink pelts are produced by fur farms annually.

Fox farming started on Prince Edward Island during the 1890's, when Sir Charles Dalton and Robert Oulton, the two fur industry pioneers, begun raising fox pups, obtained from natal dens, in captivity. The fox industry quickly developed to be the most profitable sector of agriculture on the Island at the time. Significant revenue was obtained from breeding stock sales in the early days of the industry. For example, an adult breeding pair would cost $18 000-$35 000.

The silver fox is a member of the dog family (Canidae) and is omnivorous in its feeding habits. Most farmed foxes in Canada are fed with commercially manufactured, dry pelleted diets. In addition, a meat-based diet made up of chicken offal, beef by-products, fish and many other meat and packing house by-products, supplemented with a grain cereal, is fed. Foxes are inquisitive by nature but may bite when defensive. Foxes are handled with thick leather mitts or neck tongs. Adult foxes are housed individually in wire mesh pens and they are provided a nest box for the reproduction season.

Foxes are bred only once a year and the breeding season of the silver fox is from January to March. Pregnancy lasts for 54 days and a litter of 1-9 pups is born during March-May. The female fox, or vixen, nurses her pups for about 6 weeks and the litters are weaned in May-June. Weaned pups are first reared together and the litters are later separated into pairs. Winter fur development begins in August and the fur is prime in November-December. The natural color types of the silver fox species include for example the following: standard silver, standard pearl, platinum, standard platinum, as well as many other colours and their combinations.

At pelting, foxes are killed with electric current. The skin is removed and the fat layer scraped off by fleshing. The skin is further cleaned by drumming in sawdust and then stretched onto a board for drying. The dried raw skins (pelts) are shipped to an auction house where they are sorted for quality. Furs with similar characteristics are bundled together and are sold in auctions where international buyers bid for the furs. Price is determined based on the supply and demand of the furs and varies from year to year. The fox industry is more subject to market fluctuations than the mink due to changes in fashion trends.