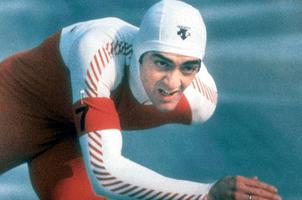 Gaétan Boucher, speed skater (b at Charlesbourg, Qué 10 May 1958). Boucher began SPEED SKATING as an adjunct to hockey. By the time he was 14 he had won his first of many Canadian championships. A ninth place in the 1000 m at the 1976 Innsbruck Winter Olympics established him as a top international competitor.

In 1977 he was world indoor speed-skating champion and in 1978, 1980 and 1982 he finished second at the more prestigious World Sprint Speed-skating Championships. At the 1980 Lake Placid Winter Olympics he finished behind American Eric Heiden to win the silver in the 1000 m, one of only 2 Canadian medals that year.

The 1984 Sarajevo Olympics saw Boucher return from a broken ankle suffered the previous year to record one of the greatest performances ever by a Canadian Olympian. With a fine technique developed because of his small stature, he won gold medals at the 1000 m and 1500 m events on 14 and 16 Feb and a bronze in the 500 m later in the Games. He followed this by capturing the 1984 and 1985 World Sprint Speed-skating Championship. He was named Officer of the ORDER OF CANADA in 1984, and was also awarded the LOU MARSH TROPHY and inducted into CANADA'S SPORTS HALL OF FAME that year. Boucher held the record for the most Olympic medals won by a Canadian athlete until he was surpassed by fellow speed skaters Marc GAGNON in 2002 and Cindy KLASSEN in 2006. Following retirement, Boucher continued his interest in skating: he has been designing hockey skates for Bauer in Montreal since 1996.