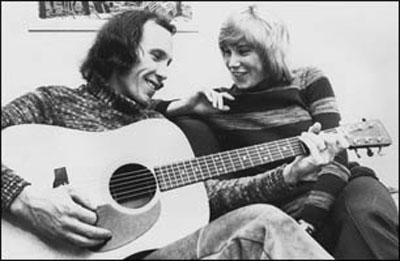 Raised in Toronto in a church-going family, the shy but talented Gene MacLellan suffered polio and other medical conditions in childhood. He began playing guitar at age 10 and writing songs in his early teens. After joining Toronto’s nascent rock ‘n’ roll scene, MacLellan dropped out of high school and played with local rock bands as a guitarist and singer. In 1956, he co-founded the popular rock band The Consuls (later known as Little Caesar and the Consuls), which opened for Ronnie Hawkins, a powerful figure in Toronto’s early rock scene.

MacLellan’sperforming career was slowed by a 1963 car accident that claimed the life of his father and left Gene with several injuries, including facial scarring and an injured left eye. MacLellan left Toronto to travel through Canada and the United States, working temporary jobs before settling in Prince Edward Island in 1964, where he became an attendant at a psychiatric hospital.

MacLellan continued to compose songs during this period, and his songwriting took on a folk-country-gospel sound. He sent a demo tape to the Charlottetown Festival and the popular CBC TV program Don Messer’s Jubilee, which was taped in Halifax (see also Don Messer). His break came when he appeared on the show — first as a guest and then regularly in 1966 — introducing his original songs to a national audience. It was here that MacLellan met Anne Murray, which proved to be a turning point in both their careers. He then toured with Hal “Lone Pine” Breau (father of noted jazz guitarist Lenny Breau), and was briefly a regular on CBC Halifax TV’s Singalong Jubilee (ca. 1970).

The success of MacLellan’s songs “Snowbird,” (recorded by Anne Murray on her 1969 album This Way is My Way), and “Put Your Hand in the Hand” (recorded in 1971 by the Toronto rock band Ocean) brought him to national attention as a songwriter. Murray’s cover of “Snowbird” became a crossover hit on country and pop charts; it reached No. 1 on Billboard’s Adult Contemporary chart) and earned MacLellan a 1971 Juno Award for composer of the year. Ocean’s version of “Put Your Hand in the Hand” reached No. 2 on the Billboard Hot 100 chart. In 1971, Chet Atkins won a Grammy Award for Best Country and Western instrumental performance for his instrumental version of “Snowbird,” while Shirley Ceasar won a Grammy for Best Soul Gospel Performance for her recording of “Put Your Hand In the Hand.”

In 1970, MacLellan released his own LP, Gene MacLellan (1970, Cap ST-6348; known as Street Corner Preacher in the United States). Recorded in Nashville, the album produced the modest country hits “The Call” (a Top 20 hit on the RPM chart) and “Thorn in My Shoe.” The same year, he also performed weekly with Anne Murray on the CBC Radio show After Noon.

MacLellan made concert appearances in 1971 and 1972, was a headliner at Toronto’s Riverboat club in 1972 and 1973, and gave a concert at Massey Hall with The Bells as part of a 1972 cross-Canada tour. Other noteworthy performances included those at the Canadian National Exhibition and for a Miss Canada television special.

During this period, he also released the singles “Isle of Saint Jean” (1971, No. 8 on RPM’s adult contemporary chart); the 1971 country hit “Pages of Time;” “Lonesome River” (a 1972 Canadian country hit); and “I Get Drunk on Monday” (alternatively titled “Gene’s Blues,” a Canadian adult contemporary No. 10 hit). He judged a song contest for the CBC and appeared on television on The Tommy Hunter Show (see Tommy Hunter) and The David Frost Show in the US. MacLellan, tiring of the demands of the music business, then left music for five years.

In 1977, he returned and released his second LP, If It's Alright with You (Cap ST-11535), which included “Shilo Song,” a popular country duet with Anne Murray. He became devoted to his Christian faith and performed gospel and inspirational music at community venues such as churches and prisons. His third LP, Gene & Marty (Pilgrim PMC-7005), a collection of gospel songs with Marty Reno, was released in 1979; together, the duo toured Canada. In 1987, MacLellan received The Performing Rights Organization of Canada’s William Harold Moon Award for international achievement (see also SOCAN).

MacLellan was based for a time in Burlington, Ontario, and after 1992 in Summerside, PEI. An unassuming, compassionate and spiritual person, he continued to eschew the spotlight in favour of more intimate settings. He performed on occasion during the 1980s and 1990s in churches and penitentiaries, as well as at benefits. He appeared on gospel broadcasts and PEI cable television programs, and as a member of the band Refuge on CBC Radio in the 1980s. In 1982, he recorded the album and single Reunion with Janice Lapointe McLaughlin. He also made a few formal appearances, such as for a 1986 Easter Seals television broadcast, and with Anne Murray at her induction into the Canadian Music Hall of Fame in 1993. Also in 1993, he performed with Lennie Gallant at PEI’s Lucy Maud Montgomery Festival.

MacLellan’s songs have been recorded in more than 25 countries. “Snowbird” and “Put Your Hand in the Hand” remain his most successful compositions. The latter, recorded by more than 100 artists — including Elvis Presley, Joan Baez, and Bing Crosby with Count Basie — has become a standard of the gospel repertoire. MacLellan has also been credited with helping develop the Christian music genre in Canada (see also Gospel Music).

MacLellan devoted much of his song royalties to assisting young songwriters through his company, Gen-Mac. He also assisted in counselling and rehabilitating prison inmates.

After a lifelong battle with depression, MacLellan was hospitalized and soon after committed suicide at his home in Summerside, PEI, on 19 January 1995 (see also Fighting Depression-related Suicide).

In 1970, MacLellan was honoured by BMI as the first Canadian composer to receive one million airplays in the US. He was also a runner-up for the Nashville Songwriters’ Association’s best composer of 1970. SOCAN conferred “Snowbird,” “The Call,” and “Put Your Hand in the Hand” with the status of Canadian classics in 1993, and all three earned BMI awards (as did “Thorn in my Shoe”) and PROCAN’s Crystal Awards. Renée Martel’s French version of “Put Your Hand in the Hand,” “Prends ma main,” was declared a SOCAN classic in 2008.

MacLellan was made an honorary life member of the International Songwriters' Union of Canada. After his death in 1995, he was inducted into the Canadian Country Music Association’s Hall of Fame, received the East Coast Music Association’s (ECMA) Dr. Helen Creighton Lifetime Achievement Award (1996), and was honoured at the ECMA awards in both 1995 and 1996. “Snowbird” and “Put Your Hand in the Hand” were inducted into the Canadian Songwriters Hall of Fame in 2003 and 2006, respectively.