And the Lord was sorry that He had made humankind on earth, and it grieved him to his heart. So the Lord said, 'I will blot out from the earth the human beings I have created - people together with animals and creeping things and birds of the air, for I am sorry that I made them.

This article was originally published in Maclean's Magazine on November 11, 1996

And the Lord was sorry that He had made humankind on earth, and it grieved him to his heart. So the Lord said, 'I will blot out from the earth the human beings I have created - people together with animals and creeping things and birds of the air, for I am sorry that I made them.This article was originally published in Maclean's Magazine on November 11, 1996 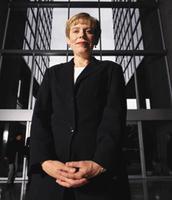 Armstrong argues that genesis should be read as a human drama, one that requires the same kind of meditative attention that we give to a poem (courtesy Maclean's).

God saw everything that He had made, and indeed, it was very good. - Genesis 1:31

And the Lord was sorry that He had made humankind on earth, and it grieved him to his heart. So the Lord said, 'I will blot out from the earth the human beings I have created - people together with animals and creeping things and birds of the air, for I am sorry that I made them.' But Noah found favor in the sight of the Lord. - Genesis 6:6

A pious Bible reader, pondering the story of Noah and the flood, might excuse God's desire to punish a sinful world. But not Karen Armstrong. In her provocative new book - which takes its title, In the Beginning, from the first three words of Genesis - the former Roman Catholic nun condemns God's "monstrous" destruction of the human race. "It is hard to feel that the deity of the flood is anything but evil," writes Armstrong. The author of the 1994 best-seller A History of God probes for the motivation behind the "cruel massacre." Did God lose control of his creation, she asks? Or was the "divine mercilessness" the whim of an "immature" God. After all, claims Armstrong, it was God who created the "evil inclination" in the hearts of human beings. "At best the God of the flood can be seen to behave like a petulant child who is tired of the castle he has created with his building blocks and knocks it down," she concludes. The no-nonsense 51-year-old British writer takes Noah to task for his lack of compassion. The man who built the ark, she observes, was a "yes-man." Instead of pleading the case of his fellow human beings who were drowning all around him, "Noah simply did what he was told, asked no questions and saved his own skin."

Armstrong has a way with the Word. In the Beginning is a lively, often irreverent interpretation of the familiar stories of Genesis - one that challenges conventional notions of God and the heroes of the Bible. It is also part of a surprising surge of interest in the first book of the Bible. More than a dozen books on Genesis have appeared in recent months. The ancient text is also the focus of a 10-part TV series currently running on PBS. In each weekly episode of Genesis: A Living Conversation, journalist Bill Moyers, a former Baptist minister, leads a diverse group of clergymen, writers and artists - Jews, Christians, Muslims as well as nonbelievers - in an hour-long discussion of a Genesis story. "There were sharp clashes and differences of opinions," says Armstrong, who appears in one of the instalments.

But, beyond the babel, many of the voices in this mini-revival agree that Genesis is most relevant when it is read as a literary - not a literal - work. The scientific bias of Western culture, argues Armstrong, has led many to look for absolute, historical truth in the pages of the Bible. "Some believe that God really did make the world in six days," she says. "What we need to understand is that the Bible does not present its truth to us in this way." Armstrong - and others, including Jack Miles, author of this year's Pulitzer Prize-winning God: A Biography - examine Genesis as a human drama, with God as the central character, and a ragged cast of mortals in supporting roles. "These are literary tales of a high order," says Armstrong. "Reading it demands the same kind of meditative and intuitive attention that we give to a poem."

Armstrong explains that, as in a novel or a poem, the meaning of Genesis emerges from questioning the characters' actions and motives and relating them to the current problems of human existence. In many cases, Armstrong says, that will mean "taking the biblical characters off their pedestals." Abraham, she observes, is a "ruthless" father ready to sacrifice his son at the behest of his God; Adam, "a stooge" who lets Eve do all the talking, then blames her when things go wrong. "They are flawed human beings," she says, "not like the Catholic saints I read about as a child who were impossibly perfect and boring. They are, like ourselves, struggling human beings."

The stories of Genesis, Armstrong argues, speak as immediately to today's readers as they did to the biblical authors' first audience. But some experts caution that, by emphasizing the stories - and discounting the history, language and culture from which they arose - Armstrong and other popularizers of Genesis are overlooking an important dimension of the text. "How can we presume to read the Bible unless we first place ourselves in that ancient culture and understand it?" asks Sterling Bjorndahl, a professor of religious studies at Augustana University College in Camrose, Alta. "Otherwise all we are doing is imposing our own value systems on a work that is as alien as we can imagine." And others, of course, prefer to read the Bible within the framework of their faith. "Sometimes when people look at it in a literary way," says Russell Sketchley, a 34-year-old systems analyst who leads a weekly Christian Bible study group in Halifax, "they ignore the fact that some people believe this is also the word of God."

It is unclear whether Armstrong's words will fall on fertile ground. With church and Sunday school attendance down, Bible literacy is also low. "There is a lot of superficial knowledge of the Bible out there," says Bjorndahl. Many adults learned about Adam and Eve and Noah as children, he notes, but "there are a lot of stories that never get taught in Sunday school." But at the same time, sales of the Good Book are soaring. Early this month, a cover story in the U.S.-based book trade magazine Publishers' Weekly described "an elephantine Bible market that keeps getting bigger." Some observers suggest that North Americans, disenchanted with New Age pursuits, are seeking a more authentic form of spiritual nourishment in sacred scripture. "More people are realizing that angels and channelling are rather thin and shallow," suggests James Lindenberger, who teaches a course on Genesis at the Vancouver School of Theology. "The flow is not so much back to organized religion but to a fascination with the biblical story, especially the book of Genesis because there is nothing thin and shallow there."

Genesis encompasses the grandeur and the misery of the human condition. The opening 11 chapters trace the origins of the universe from a "formless void" to the creation of Adam and Eve, their expulsion from the Garden of Eden, Cain and Abel and the first murder, Noah and the flood and the Tower of Babel. The longer second part, 39 chapters sometimes called the "patriarchal tales," begins with God's promise to Abraham: "I will make of you a great nation," then follows the divine-human relationship through generations of his descendants, ending with Joseph's return from exile in Egypt.

The sacred text, originally written in Hebrew, is an important part of Jewish and Christian scriptures, forming the first book of the Old Testament and the first of the five books of the Torah. Similar stories appear in the Koran, Islam's holy book. "Genesis 1 to 11 precedes all history," says Walter Vogels, a Catholic priest and author of several books on the Bible. "They do not speak about Jews, they do not speak about Christians - they speak about humanity. The texts are deep reflections on our human nature - that's why they are so rich and beautiful."

Like Jacob and the mysterious angel, Armstrong has wrestled with God from the day she joined the Society of the Holy Child Jesus in Sussex, England, in 1962, at the age of 17. But there was little time to think about Genesis when she was in the convent. The young nun's visions of religious transformation were quickly wiped out in the daily grind of scrubbing convent floors. "The idea was you would be involved in manual labor to free your mind for communing with God, but all it did was drive me into a state of fury." Armstrong left the church after leaving the convent in 1969. Twelve years later, she published her first book, Through the Narrow Gate, a critical account of life in the convent. "Catholics in England don't like me," she admits. "They see me as a runaway nun, washing out Catholic dirty linen in public."

But Armstrong never lost her fascination with the spiritual. "Homo sapiens is always Homo religiosus," says the author of numerous books and producer of several documentaries about Christianity, Judaism and Islam. Still, with no wish to rejoin a church, she continues to refine her portrait of God. Hers is not "the nice, cozy Daddy in the sky" she once believed in. God, says Armstrong, is "a reality that one encounters in the depth of oneself." The God who is centre stage at the creation in Genesis "finally disappears from the world," she notes. "Joseph and his brothers have no appearances of God and are left like us, having to rely on their own dreams and insights. But that is the nature of our experience of the sacred - it's fragmentary, confused and ambiguous."

Armstrong's reading of the Bible will shock some traditional Christians. "To talk critically about God as a character in a story may be hard for some conservative readers of the Bible to take," says Robert Polzin, professor of comparative literature and religion at Ottawa's Carleton University, noting that it has always been part of the Jewish tradition to question the Bible. "This approach is strange to some people," says Polzin. "But it is also exciting and intriguing, because the character of God in the Bible has been almost untouchable." And endlessly debatable. When it comes to Genesis, Armstrong states, "Nobody is allowed to have the last word."