Signs of Life is a powerful collection of 33 mixed-media works, drawings, sculptures and a major installation by Goodwin who, at 72, is one of Canada's most outstanding artists.

This article was originally published in Maclean's Magazine on December 4, 1995

Signs of Life is a powerful collection of 33 mixed-media works, drawings, sculptures and a major installation by Goodwin who, at 72, is one of Canada's most outstanding artists.This article was originally published in Maclean's Magazine on December 4, 1995 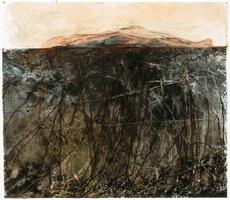 Shown at an exhibition of artist Betty Goodwin's paintings at the Art Gallery of Windsor, December 1995 (courtesy Maclean's).

It is, on the surface, a hauntingly beautiful landscape. In the hazy glow of a sunset, crimson mountains stretch across a dark and densely textured sea. But within this mixed-media work by Montreal artist Betty Goodwin lies a disturbing underworld. The sanguine hills, on close inspection, assume the shape of a bloodred human body floating, facedown, in murky waters. The figure may be drowning, limbs entangled in masses of seaweed. Or perhaps it is a swimmer, pushing forcefully through the currents. Ultimately, Nerves No. 14 - part of Signs of Life, a major exhibit of Goodwin's work that recently opened at the Art Gallery of Windsor - transports the viewer to an inner landscape imbued with the pain and suffering of human life. But despite its often bleak imagery, Goodwin's art is strangely exhilarating. "The works are sombre in that one feels the fragility of life and a sense of mortality," says curator Jessica Bradley. "But I called the show Signs of Life because there is always a reaching for the vitality of things."

Signs of Life is a powerful collection of 33 mixed-media works, drawings, sculptures and a major installation by Goodwin who, at 72, is one of Canada's most outstanding artists. The subject of a travelling retrospective in 1987, she represented Canada at the Venice Biennale this year and, in addition, won the $25,000 Gershon Iskowitz Prize, an annual Canadian award for sustained artistic excellence. The exhibit travels to the National Gallery in Ottawa at the end of February, where it shows until May 12. Meanwhile, Betty Goodwin: Icons, a show of more than 70 of the artist's small-scale drawings, is at the MacKenzie Art Gallery in Regina until Jan. 28. While the Regina show spans the past two decades, Signs of Life focuses on new projects from the past five years.

All the works - drawn from two of Goodwin's latest series, La mémoire du corps (Memory of the Body) and Nerves - are strong, moving statements on their own. But viewed together in Signs of Life, they appear to be connected, each a variation on a theme that Goodwin has explored in her art over the past three decades. That theme is summed up by the Samuel Beckett quote appearing in several of the show's drawings: "It is the inner space one never sees, the brain and heart and other caverns where thought and feeling dance their sabbath."

Goodwin's pieces evolve in the act of drawing, her main medium of expression. "I don't have a blueprint in my mind," says Goodwin. "A work starts with the seed of an idea and in the process of working it reveals itself more thoroughly." For many of the drawings in Signs of Life, Goodwin drew with graphite, pastels and oil stick on Geofilm, a translucent mylar that she chose for its resilience and skin-like quality. Smudges, eraser marks and bits of masking tape left behind become part of the imagery, suggesting bruises and wounds in some of the exhibition's drawings. "The works themselves are so alive," says Bradley, "in that one really feels her process - the layering, the backing away, the crossing out, the starting over again." Much of Goodwin's work is black and white. And when she resorts to color, Bradley notes, the artist does so mainly "for dramatic effect. The images carry the meaning of the work."

Goodwin uses the human figure as a metaphor in inventive, expressive ways. In the Nerves series, she has gone beneath the skin with the urgency of a surgeon, seeking the nerve centre, the source of inner life. In three sculptures titled Spine, for example, the artist has transformed steel rods and plaster into stark columns resembling fragments of backbone, bristling with nerve-like wires. "They are not illustrations of a spine," says Bradley, who recently joined the Art Gallery of Ontario as curator of contemporary art. "They give more a sense of the spine as a life centre of the body." In another, multimedia work, La mémoire du corps XX, one of the finest pieces in the show, a network of black, vein-like tree roots appears to vibrate on a shimmering bloodred background. The piece is like a supernatural X-ray, allowing the artist to portray and illuminate the elusive pulse of life.

Paradoxically, in several works Goodwin explores the human body through its absence. Many years ago, she discovered an old Paris-Match photo of a sitz bath used to calm Vincent van Gogh in his final days at a sanatorium. She pinned the picture to the wall of her studio in an abandoned factory in east-end Montreal, which she and her husband, Martin, a 74-year-old retired engineer, had converted into a home and work space. Now, Goodwin has transformed that crude bathtub image, suggestive of a womb or a tomb, into a powerful symbol of life and death. The empty tub - suggesting, she says, "a memory of the body" - is enlarged to mural-sized proportions in a dramatic painting called La mémoire du corps VI. The red outlines of the tub appear to glow through dirt and soot on a tarry black background, provoking - through the impact of the image - an inexplicable sense of awe at the mystery of existence.

The most straightforward piece in Signs of Life is Distorted Events. A large, heavy steel plate is engraved with thousands of serial numbers, suggesting a monument to those who died in the Holocaust. An ordinary, heavy-duty shovel hangs at the front and centre of the work, assaulting viewers with the stark reality that millions of people died and were buried. When asked about the origins of the work, Goodwin is evasive. "It is absolutely very difficult for me to talk about what my inspirations are," she says. "It's not even an inspiration, it's more like a piece of weaving that comes together from many experiences. I live in the world today and I guess it gets connected." But Goodwin resists any attempt to trace the desolate imagery of her work to cataclysmic events in her own life, including the death of her only son in 1976. All she will allow is that art is "how I cope with what is going on."