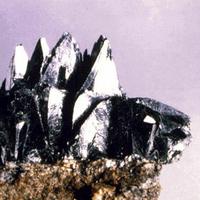 Graphite is one of the 4 allotropes of carbon. The other allotropes are DIAMOND, the fullerenes also known as "bucky balls" and amorphous carbon (charcoal, coke and carbon black). These allotropes of the same element carbon have very different crystal structures and physical properties. There are 2 types of graphite - natural and synthetic. Natural graphite is black with a sub-metallic lustre, feels greasy and stains the fingers. Graphite is found mainly in METAMORPHIC ROCKS, most frequently in schist and as small crystals in impure marbles in association with other minerals.

Natural graphite appears to have been created through the decomposition of organic material contained in LIMESTONE during metamorphism. The 3 main types of natural graphite are microcrystalline (known commercially as amorphous), crystalline flake and lump graphite. The crystalline type is the most widely used and is sold classified by flake size (large, medium and small) and carbon content. Typical flake graphite grades 90% to 95% carbon graphite. The large flakes command the highest prices, given a certain carbon and ash content.

There are 3 types of synthetic graphite - primary, secondary and graphite fibres. Primary synthetic graphite has a very high carbon content of 99.9% and is manufactured on a large scale in electric furnaces using petroleum coke as raw material; it is used to produce electrodes and carbon brushes. Secondary graphite is used in the refractories industry. Graphite fibres are produced from organic precursors such as rayon or polyacrilonitride and tar pitch; they are used as reinforcing agents in polymer composites in aerospace and sporting goods.

Graphite is an excellent conductor of heat and electricity, with a very high (3550° C) melting point. It is thermal shock-resistant and chemically inert. It resists oxidation, has a low absorption coefficient for X-rays and a very low coefficient of friction. Its major uses are refractories and brake linings, followed by lubricants, foundries, carbon brushes, crucibles, batteries, pencils, rubber, conductive coatings, powder metals and graphite foil. By far the major use of crystalline flake graphite is in refractories. Graphite foil is a relatively new product and is produced by heating and exfoliating flake graphite salt and then rolling it into sheet/foil. It is then shaped into gaskets and seals for use in the automotive and chemical industries, or used as sheet in nuclear reactors as a neutron moderator. Small quantities of very high purity natural and synthetic graphite are used to produce synthetic industrial diamonds.

Timcal Canada Inc, in Lac-des-Îles, Québec, is the only graphite producer in Canada. Other producing countries are Ukraine, Brazil, India, North Korea, Republic of Korea and Mexico.