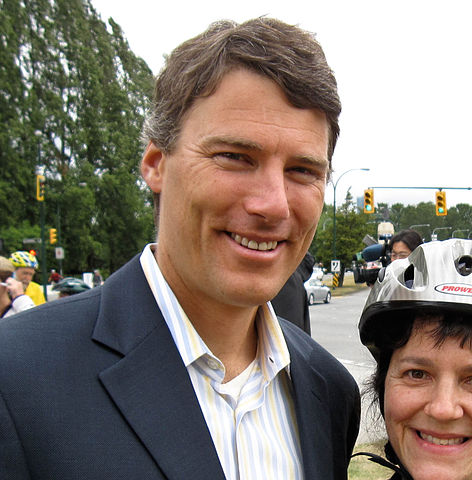 Gregor Robertson, then mayor of Vancouver, with a cyclist on Burrard Street, Vancouver (13 July 2009). (photo by Ariane Colenbrander/Wikimedia CC)

Gregor Angus Bethune Robertson was born in North Vancouver on 18 September 1964 to John and Corneil Robertson. After his parents divorced, he was raised in Portola, California, by his mother, who was a teacher, and later in Vancouver by his father, who was a corporate lawyer at the firm Russell Dumoulin.

Gregor Robertson graduated from Carson Graham Secondary School in North Vancouver in 1982 and enrolled at the University of British Columbia. He then transferred to Colorado College, where he studied English and biology and graduated in 1986. There, he met his future wife, Amy. Robertson originally considered medicine as a career but became more passionate about nutrition and farming. In 1988, he and his wife began a 14-month voyage across the Pacific Ocean to New Zealand on a wooden ketch, an 18 m sailing ship. In New Zealand, they spent some time working as farmers.

In 1990, the Robertsons returned to Canada and bought a dairy farm in Langley, British Columbia. Robertson ran an organic farm with his wife, and in 1994 he cofounded an organic juice company, Happy Planet, with friend Randal Ius. Robertson left the daily operations of Happy Planet in 2005 but continued to hold shares in the company until 2013. Between 2002 and 2004, Robertson acted as director of Tides Canada, a national environmental charity that works to solve major social and environmental issues.

In 2005, Gregor Robertson was elected as a Member of the Legislative Assembly as an NDP for Vancouver-Fairview. During his term, he cochaired the NDP’s climate change task force and served as the opposition critic for small business. Between 2005 and 2008, he supported small businesses during construction of the Canada Line, a rapid transit line part of Vancouver’s SkyTrain that runs from Vancouver to Richmond, with a route to Vancouver International Airport.

In June 2008, Gregor Robertson left his position as MLA upon winning the mayoral nomination for Vision Vancouver, a green liberal municipal party with a focus on the environment and affordable housing. During his election campaign, Robertson promised to make Vancouver the greenest city in the world and to end homelessness by 2015. On 16 November 2008, Robertson won his first seat as mayor, defeating his main rival, Non-Partisan Association candidate Peter Ladner. During his decade-long tenure as mayor, Robertson achieved a number of successes while facing several significant challenges.

Acting on Vision Vancouver’s commitment to environmental sustainability, Gregor Robertson became cochair of the Greenest City Action Team in 2009 and played a major role in the creation and implementation of the Greenest City 2020 Action Plan. The ambitious plan outlined Vancouver’s goal to become the greenest city in the world by 2020 and identified the following ten objectives:


Some of Robertson’s green initiatives were met with controversy. As chair of the Mayors’ Council on Regional Transportation, Robertson supported improved bike and transit infrastructure. He championed the expansion of Vancouver’s bike lane network throughout the city. While at first controversial, the bike lanes became popular and led to an 85 percent increase in cycling between 2006 and 2016. At the end of his tenure as mayor, he claimed that Vancouver was the best city for cycling in North America. Robertson also helped to gain funding from all levels of government for a $2.83 billion subway extension of the SkyTrain system, with construction beginning in 2020.

As part of Vancouver’s renewable city strategy, Robertson and his council voted in 2016 to phase out natural gas use, aiming for a 70 per cent reduction by 2020 and 90 percent reduction by 2050. Natural gas, which is used for heating and cooking, would no longer be used in new buildings, and old buildings would have to switch to renewable sources of energy such as biofuels and electricity. The decision was met with controversy, with critics arguing that families and small business owners would shoulder the financial burden of retrofitting natural gas furnaces and appliances.

To increase urban green space, the city of Vancouver purchased the Arbutus rail corridor from CP Railway in 2016 in order to turn it into a greenway. The many green initiatives under Robertson’s leadership led to Vancouver’s 2016 ranking as the third greenest city in the world by the Global Green Economy Index.

At the same time, Vancouver also faced the problem of increasing numbers of illegal cannabis shops. In 2016, the city began to license and enforce medical marijuana-related stores, licensing some of these shops while closing others that did not comply with city bylaws. (See also Cannabis Legalization in Canada.)

Between 2008 and 2018, Vancouver real estate remained in crisis, with home ownership becoming increasingly unaffordable. During this period, Vancouver home prices more than doubled. To address the problem, Gregor Robertson supported increased housing density. He approved bylaw changes that streamlined the building of laneway homes and rezoned large parts of the city to permit duplexes, single houses with two separate entrances to accommodate two apartments. Robertson was criticized for privileging international real estate developers, but he argued that the city did not control real estate and offshore investment. Instead, Robertson stated that the lack of provincial and federal control over foreign investment and their lack of funding for affordable housing worsened Vancouver’s housing market crisis. In 2018, Vancouver was once again ranked as the least affordable housing market in Canada.

The homelessness crisis also worsened, despite Robertson’s initial campaign promise to end homelessness. During his first mayoral campaign in 2008, there were 1,536 homeless people in Vancouver. Robertson helped to open more social housing and temporary shelters, providing more indoor shelter for those without homes. Yet when his final term as mayor came to an end in 2018, the number of homeless people had grown to 2,181. Ultimately, the public response to Robertson’s handling of Vancouver’s complex housing situation was mixed. In a 2018 poll by Research Co., 53 percent of Vancouverites reported that the municipal government under Robertson’s leadership had done a very bad job dealing with housing.

Despite considerable challenges, Gregor Robertson helped the city of Vancouver to achieve sustainable growth during his time as mayor. In 2011, Robertson initiated Vancouver’s first Economic Action Strategy. An increase in green jobs and the expansion of the film and television production industry boosted Vancouver’s economic growth, benefitting the city through increased local employment and income generated by street-use permits. Critics argued that increased municipal spending led to tax and rent increases, causing some small businesses to shut down. However, in 2016, Vancouver was named the most sustainable city in North America, based on social, environmental and economic sustainability (Arcadis Sustainable Cities Index). The following year, the city ranked third. Upon leaving his position in 2018, Robertson boasted that Vancouver had the strongest economy in Canada.

When Robertson announced in 2018 that he would not run again for a fourth term as mayor, the Vision Vancouver party significantly shrank in size. In the 2018 municipal election, Vision Vancouver did not run a mayoral candidate, and independent candidate Kennedy Stewart was elected mayor. They ran four candidates for city council but won no seats. 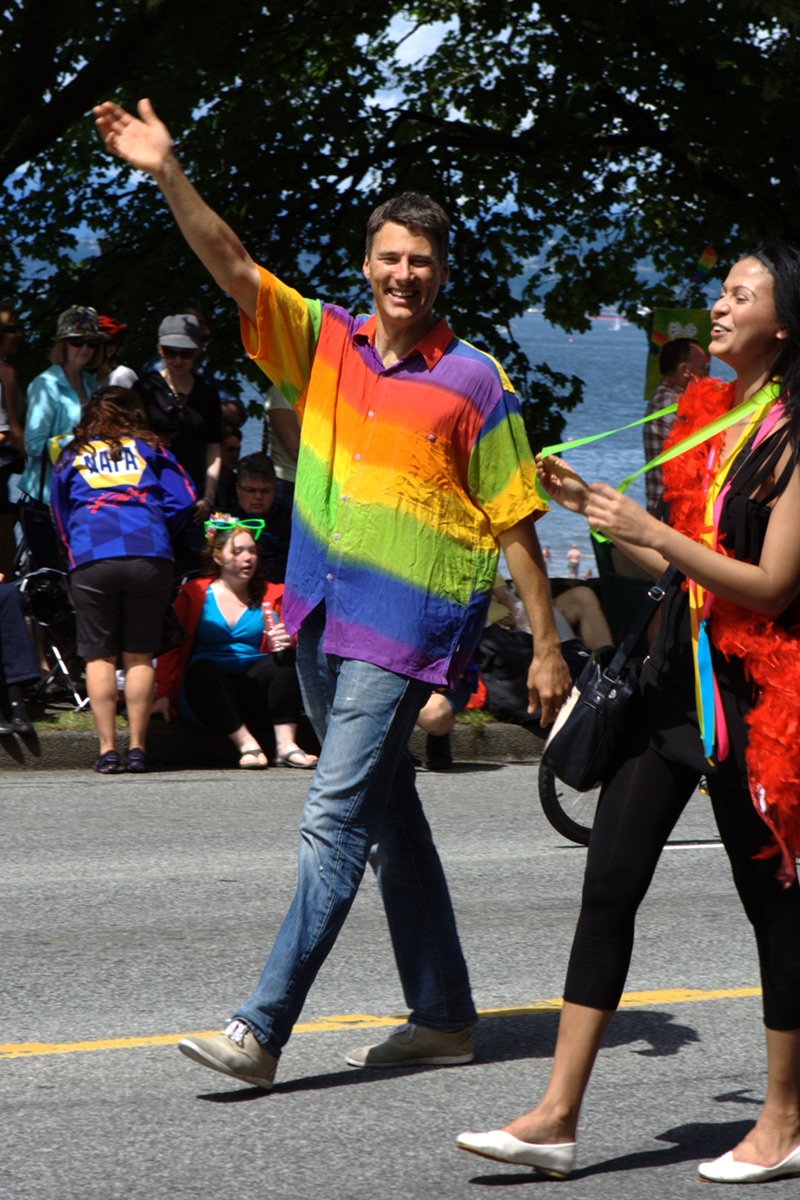 Then Vancouver Mayor Gregor Robertson waves and marches in the city's Pride Parade on July 31, 2011.

Gregor Robertson is a distant relative of Norman Bethune, a Canadian surgeon who became a hero in the People’s Republic of China for treating Chinese soldiers in the 1930s. Robertson speaks Cantonese, and in 2012 he launched his own account on Sina Weibo, a Chinese-language microblogging site. Robertson has four children, including foster son Jinagh Navas-Rivas, with his wife Amy, from whom he separated in 2014. His interests include cycling and playing the tuba, which he performed on Slim Milkie’s 2010 country punk album, Silverado.