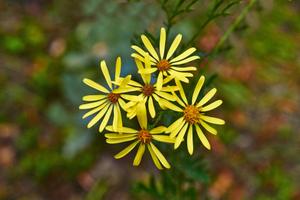 Groundsel, or ragwort, common names for plants of genus Senecio, family Compositae or Asteraceae. The genus, one of the largest plant genera (1000-2000 species), occurs worldwide and is very diverse, including small trees, shrubs, annual and perennial herbaceous plants and succulents (ie, plants with fleshy tissues for conserving moisture). About 30 species are native to Canada, growing in habitats ranging from ponds to prairie grasslands; from moist woods to mountain tops; and in the Arctic. Exact species numbers are difficult to determine because of the hybridization and complex variation patterns found in some groundsels. Flower heads are mostly yellow, and usually have both ray and disc florets, although the former are lacking in the ubiquitous, introduced weed S. vulgaris, common groundsel. The leaves (bracts) below the heads are typically arranged in a single, circular row. The fruit, a small, dry, one-seeded achene, bears a crown of white bristles.

Golden ragwort or squaw-weed (S. aureus), found from Manitoba eastwards, was used by native peoples to heal wounds and for birth control. S. cineraria, "dusty miller" or "cineraria," is a widely grown ornamental; S. cruentus is a greenhouse favourite.