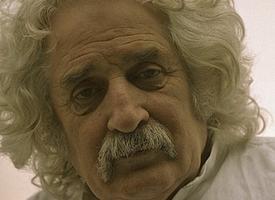 Harry Gulkin, film producer, administrator (born 14 November 1927 in Montréal, QC). Charming and mischievously witty, Harry Gulkin is a successful film producer and an influential figure in the Québec film industry. He is perhaps best known for co-producing Ján Kadár’s Lies My Father Told Me (1975) — winner of six Canadian Film Awards and the only Canadian movie to win a Golden Globe award for Best Foreign Language Film — and for being the biological father of Sarah Polley, as revealed in her documentary Stories We Tell (2012).

Gulkin grew up in the heart of Montréal’s Jewish district on St. Laurent Boulevard, known as The Main. A “red diaper baby,” his parents were Russian immigrants who were actively involved in the Russian Revolution. The idealistic Gulkin dropped out of Baron Byng High School in late 1944 and joined the merchant marines. A committed communist, he became a union organizer in the Seaman’s Union and an associate editor of the Seaman’s Union newspaper.

After his merchant marine service he returned to Montréal, where he worked as a social advocate and became the Québec correspondent, business manager and arts critic for the communist weekly the Canadian Tribune. He abandoned communism in 1956 when the horrors of the Soviet Union under Joseph Stalin were fully exposed. During the late 1950s and into the 1960s, he worked at a variety of jobs until discovering a talent for marketing that led to an executive position with a supermarket chain.

By the 1970s, Gulkin was haunted by feelings of being an imposter in the corporate world, and he decided he wanted to make movies. Driven by his love for the humanism of Italian neorealist cinema, he set out to create films that would, in his words, "celebrate that there were values in life." At the same time, he aspired to bring Canadian fiction, long ignored by moviemakers, to the screen.

Gulkin's first film, and also his most successful, was an adaptation of a Ted Allan short story, Lies My Father Told Me (1975). Directed by Ján Kadár, the film follows a boy's touching friendship with his Orthodox Jewish grandfather in 1920s Montréal. A popular and critical success, Lies picked up a Golden Globe award for Best Foreign Film, an Oscar nomination for its screenplay and six Canadian Film Awards, including Best Adapted Screenplay, Best Feature Film and the Golden Reel Award as the highest-grossing Canadian film of the year. It was also named one of the 10 best films of the year in the US by the National Board of Review.

Gulkin went on to produce Lionel Chetwynd's 1978 adaptation of Hugh MacLennan's Two Solitudes, Mordecai Richler's children's fantasy Jacob Two-Two Meets the Hooded Fang (1978) and Mort Ransen's Bayo (1985), taken from a novel by Chipman Hall. Bayo was another film that focused on a relationship with a grandfather, an experience Gulkin never had growing up in Montréal.

His next project was set to be The Incredible Mrs. Chadwick, starring Shirley MacLaine as a mesmerizing con-woman. Unfortunately, financing complications and a cerebral blood clot, that almost killed Gulkin, shut down the movie.

From 1983 to 1987, Gulkin was executive and artistic director of the Saidye Bronfman Centre for the Arts, a multi-disciplinary arts and educational centre in Montréal. In 1987, he joined the funding agency that evolved into SODEC. Embracing his role as a project manager, Gulkin spent the next 20 years mentoring and championing young filmmakers whose work enhanced the international reputation of Québec cinema. After retiring from SODEC in January 2008, he joined the Nunavut Film Development Corporation's board of directors, where he consulted on the development of cinema in the territory.

In 2008, the Academy of Canadian Cinema & Television bestowed upon him a special Genie Award, describing him as “a person of outstanding vision and merit, who has built through his love of film a stronger and more vibrant film community.” In 2004, the National Film Board produced a documentary about him, Harry Gulkin: Red Dawn on Main Street (2004), which described him as "someone who's left an indelible impression on Québec cinema."

A musical theatre production of Lies My Father Told Me was staged at Montréal’s Segal Centre for the Performing Arts in 2011, and off-Broadway at New York’s Barush Performing Arts Center in 2013.

In her acclaimed documentary Stories We Tell (2012), actor-director Sarah Polley revealed that Gulkin is in fact her biological father, due to an affair he had with her mother, actor and casting director Diane Polley, after she met Gulkin in Montréal in 1978.