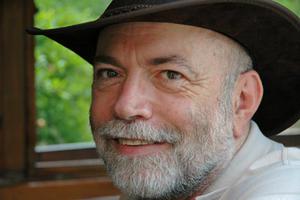 (from www.hatziz.com)
Christos (Panagiotou) Hatzis. Composer, teacher, b Volos, Greece, 21 Mar 1953, naturalized Canadian 1985; B MUS (Eastman School of Music) 1976, M MUS (Eastman School of Music) 1977, PH D (State University of New York at Buffalo) 1982. Hatzis's father was a railway engineer in Greece. The sounds of trains are among the composer's earliest sound memories and have on occasion been featured in his compositions (e.g. his String Quartet No. 1). As a child, Hatzis sang the drone line in a Greek Orthodox church; this experience is reflected both in his frequent use of drones, and in the influence of the music and texts of the Byzantine Church in many of his compositions. His musical education began at the Volos branch of the Hellenic Conservatory in 1962; he studied accordion and harmony with Charalambos Kehaides, and completed degrees in theory in 1973 and instrumentation in 1974. He then studied composition at the Eastman School of Music 1974-77. His teachers there included Joseph Schwantner and Warren Benson during his undergraduate years, and Samuel Adler and Russell Peck at the master's level.

Hatzis began doctoral studies in composition at the State University of New York at Buffalo in 1977. Lejaren Hiller was his supervisor; he also studied with Morton Feldman and Wlodimierz Kotonski. The Law of One was his doctoral thesis composition. Upon graduating in 1982 he settled in Toronto, where he worked for many years as a nightclub musician with Greek bands and as a free-lance composer and teacher. In 1995 he became an associate professor of composition in the Faculty of Music at the University of Toronto. In 2003 he was promoted to full professor.

Early Use of Computer Applications
Hatzis experimented with graphic notation in his earliest works, but as a doctoral student he began research on computer applications in music composition. Influenced by fractal geometry, he created a compositional language that he called "chronochroma," in which the numeric principles of the overtone series were used to determine aspects of pitch, timbre, harmony, rhythm, and form, thereby structurally unifying both the micro and macro levels of resulting compositions. He then created a digital sound synthesis program for both compositional and performance realizations of this language. By 1998, however, when he wrote about this method and The Law of One that resulted from it (see Writings), he had long abandoned this rigorously predetermined structuralist method in favour of a more intuitive approach to writing music. As he concluded in that article, "The Law of One is an early attempt at explaining the world. My recent music is more like an aid for coping with it." The change in focus for Hatzis was a radical one, and resulted in the withdrawal of most of his compositions written before 1987.

Among the awards and honours bestowed on Hatzis are the 1996 Jules Léger Prize for new chamber music (for Erotikos Logos), the 1996 Prix Italia special prize and the 1998 Prix Bohemia radio broadcasting awards (for Footprints in New Snow), the 1998 Jean A. Chalmers National Music Award (for String Quartet No. 1), and the 2002 New Pioneers Arts Award.

"Towards an endogenous automated music," Interface 9, 1980

"The Law of One: recursive structures in composition," Organised Sound 3.1, 1998

Other writings, including "The art of the palimpsest: compositional approaches to the music of J.S. Bach" (1998); "Footprints in New Snow: postmodernism or cultural appropriation?" (1998-99); "Constantinople and the aesthetics of cultural inclusion" (2000); and "Music for God's sake" (2004) are available on the composer's web site, www.hatzis.com.

Concerto for Flute and Chamber Orchestra. 1993

Influenced by postmodernism and New Age aesthetics, Hatzis evolved a new approach to composition. On occasion he has used the term "cultural convergence" to describe what lies behind his new orientation, describing this as the cross-fertilization that occurs when different musical cultures come into contact. At the same time, he has made use of a wide variety of historical repertoires of Western music, sometimes quoting specific pieces directly (eg, Burial Ground, which is based on "When I am laid in earth" from Purcell's Dido and Aeneas). Combining these synchronic and diachronic influences, Hatzis's mature work as a composer includes references to Medieval music, Inuit throat singing, Bach, the music of the Byzantine church, Middle Eastern classical and folk music, 1960s popular music, Mozart, jazz, and Astor Piazzolla, among other musics.

Some of these influences have given rise to extended series of works. For example, the music of Bach (whose birthday Hatzis shares) has inspired five works, collectively titled Spring Equinox: Equivoque, Stylus, The Go(u)ldberg Variations, Concerto for Flute and Chamber Orchestra, and Farewell to Bach. Glenn Gould's idiosyncratic performing style, and his signature work, are incorporated into The Go(u)ldberg Variations, which was commissioned by the Nouvel Ensemble Moderne for the opening of the CBC's Glenn Gould Studio in 1992. Gould likewise inspired some of Hatzis' radiophonic works, including The Idea of Canada, which was also commissioned for 1992 and includes a cameo appearance from the late Gould himself.

Use of Inuit Throat Singing

Also included in The Idea of Canada are brief examples of Inuit throat singing. Hatzis became fascinated by Inuit vocal practices, and in 1995 travelled to Baffin Island to record examples of throat singing. He then created a series of works inspired by this experience, including String Quartet No. 1 (The Awakening, earlier titled Nunavut), Footprints in New Snow, Fertility Rites, and Hunter's Dream. In the sixth movement of Footprints in New Snow, Inuit throat singing is combined with ecological sounds from the Far North, including the sounds of walking through the snow, the wind, bird calls, and so on. Hatzis refers to this work as a "radio documentary" rather than a musical composition; it is similar in nature to the soundscape compositions inspired by the work of R. Murray Schafer. All these works were released on a CBC CD in 2002, and are discussed by Hatzis in an essay in which he defends his work against the charge of cultural appropriation (see Writings).

Influences of the Byzantine Church

Another large influence in the compositions of Hatzis has been the Byzantine church and its music, liturgical texts, and spiritual outlook. Among his works that have resulted from this influence are Confessional (based on a Byzantine chant for Palm Sunday); Heirmos (a setting of liturgical texts in Byzantine Greek); Byzantium (the first movement is based on a Byzantine chant); Constantinople (in "Creeds," the opening movement, a Byzantine Easter chant is paired with a similar chant from Islam); The Troparion of Kassiani (based on texts by the ninth-century composer-poet-abbess Kassia); Sepulcher of Life (based on Byzantine hymns for Good Friday); and Everlasting Light (which includes a setting of the Byzantine funeral Trisagion), among others. His deep-rooted non-denominational Christian faith aligns Hatzis in aesthetic, and to some extent musical outlook, with other composers known loosely as the holy minimalists, notably John Tavener (whose works have been performed alongside those of Hatzis).