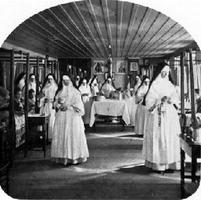 The convalescent ward of the Hôtel-Dieu, around 1875 (courtesy National Gallery of Canada). 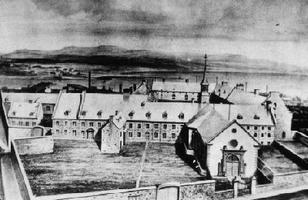 This Hôtel-Dieu was founded by the duchesse d'Aiguillon and entrusted to an order of nursing sisters, the Hospitalières of Dieppe (courtesy Library and Archives Canada).
PreviousNext

Hôtel-Dieu is the name given to hospitals established by nursing orders of nuns. The first in New France and one of the first hospitals in America was the Hôtel-Dieu de Québec, funded by the duchesse d'Aiguillon, who in 1637 obtained a site for the hospital at Québec (as well as a fief on the outskirts). Construction began in 1638 but was not completed by August 1639, when the first 3 Augustines de la Miséricorde de Jésus and a servant (all from Dieppe, France) arrived in Québec to take up their work. They established a hospital at the nearby reserve at Sillery to treat Indigenous patients with smallpox, though the building there was still under construction when they moved into it in 1640. Harried increasingly by Iroquois raids (see Iroquois Wars), in 1644 they moved to the Hôtel-Dieu's present site on Québec's rue du Palais. The foundation of this building still exists; the oldest section of the present building dates from 1696.

The Hôtel-Dieu de Montréal was founded by Jeanne Mance and funded by Madame de Bullion, the widow of one of Louis XIII's superintendents of finance. Mance began treating patients on her arrival in Ville-Marie [Montréal] in 1642; in 1644 the hospital was granted land outside the fort and in 1645 the building was completed. Mance ran the Hôtel-Dieu until her death in 1673, assisted in her latter years by the Hospitallers of St. Joseph (this order took over the hospital in June 1659 by letters patent of Louis XIV). Three times the building was destroyed by fire and rebuilt, and in 1861 the Hôtel-Dieu moved to its present site on Mont Ste-Famille, Montréal. It is affiliated with Université de Montréal as a teaching hospital.

Both groups of hospitallers later built other hospitals, including those at Tracadie, Chatham and Campbellton, NB; Kingston and Windsor, Ontario; at Chicoutimi, Arthabaska, Lévis and Gaspé, Québec (1884); at Winooski, Vermont; and in some mission countries.