Brant’s mother, Elizabeth, was a Mohawk of the Bay of Quinte First Nation. At school, Brant was an average student and got along well with his teachers. He played lacrosse and boxed, sports that he continued once he left school after grade seven. He married in 1930 and worked as an automobile mechanic for seven years. He and his wife, Irene, had no children.

During the Second World War (1939-45), Brant enlisted in the Hastings and Prince Edward Regiment (Hast & PER) on 24 April 1940 at Picton, Ontario. When he enlisted, he was 30 years old. During a medical interview in May 1944, a doctor noted that Brant said he had enrolled “because most of his relatives joined up and he wanted to be with them.”

On completion of training as an infantry rifleman, Brant sailed to Britain in July 1940 as part of a reinforcement draft for his unit, which had been there since January 1940. In Britain, he undertook further training. In mid-December 1942, the training turned to assaulting an enemy-occupied coast, including the use of scramble nets, landing craft and amphibious landings. Eventually, Brant was assigned to his unit’s A Company. The Hast & PER were one of three infantry battalions in 1st Infantry Brigade, which in turn was one of three brigades in 1st Canadian Infantry Division (see Canadian Army).

Once it was clear that the Allies were going to defeat the German forces in North Africa, the Allies agreed at the Casablanca Conference in January 1943 that their next major operation would be an invasion of the Italian island of Sicily. In late April, 1st Canadian Infantry Division and 1st Canadian Army Tank Brigade became the Canadian contribution to Operation Husky — the code name for the Allied invasion of Sicily (see The Italian Campaign).

On 13 June 1943, Brant and his A Company comrades boarded His Majesty’s Transport Derbyshire at Greenoch, Scotland. Fifteen days later, they departed in a large convoy, bound for Sicily. The Hast & PER was designated as one of the leading assault battalions in 1st Division’s sector on the southeast coast of the mountainous island, near Pachino. On 10 July, the Canadians landed, with 1st Brigade on the right and 2nd Brigade on the left. Brant’s A Company was in reserve and was put ashore in the wrong place, some 4600 metres too far to the west. Fortunately, this error had no long-term consequences and the battalion’s companies were quickly reunited. The next day, the Hast & PER headed inland.

The first major action in which Brant and his comrades took part was an attack against the hill town of Grammichele (see The Italian Campaign). It was also the first time that the Canadians fought German troops. Brant was awarded the Military Medal (MM) for his bravery there. The citation for his medal reads:

In the battle for Grammichele on the 14 July 1943, Private H.E. Brant distinguished himself by his prompt and courageous attack with his Bren gun on an enemy force of approximately 30 men, inflicting severe casualties. Private H.E. Brant totally disregarded his own personal safety in the face of very heavy enemy fire and made possible the killing or capturing of the entire enemy force.

Brant’s action contributed to the capture of the village and caused the enemy to withdraw. This in turn led to the resumption of the advance inland by the Canadians. In a rare honour, General Bernard Montgomery, commander of the 8th Army, personally pinned the MM on Brant’s chest in a ceremony in an orchard in Catanzaro on the Italian mainland in September 1943. 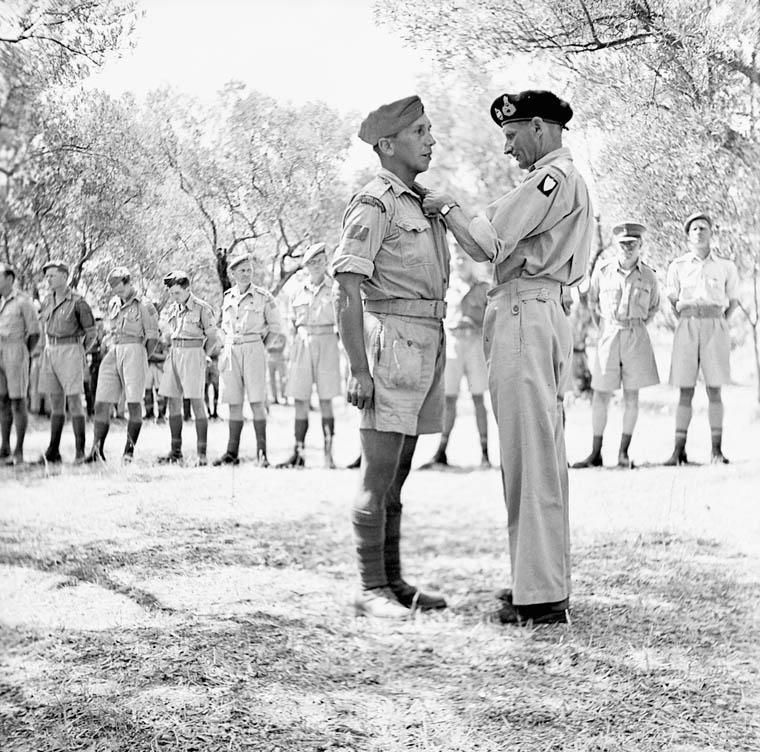 After the successful conquest of Sicily, the Allies invaded mainland Italy in September 1943 (see The Italian Campaign). The next few months witnessed a long, hard slog up the Italian boot. The continuous stress took its toll and Brant suffered from physical and mental illnesses. He saw a military psychiatrist on 19 December 1943 (after being wounded) and was diagnosed as having psychiatric exhaustion. Later, in May 1944, he was assessed by another psychiatrist with mild psychoneurosis, known today as post-traumatic stress disorder (PTSD). Psychoneurosis, then known as “shell-shock,” affected about 10 per cent of front-line (war zone) soldiers.

In his history of the Hast & PER, postwar author (and staunch environmentalist) Farley Mowat (one of three platoon commanders in Brant’s A Company) summed up PTSD as follows: “There were men who had served through five years of active service and a year and a half of continuous battle and whose nerves were now only empty sheaths — men who had given of their reserves to the last dregs and who were afraid one more battle would see them smashed into palpitating inner dust.” Brant’s condition was not as bad as those Mowat described and he was returned to duty. During the interview with the psychiatrist in 1943, Brant noted that he “liked the army.”

On 10 October 1944, after a period of rest, the Hast & PER replaced a British unit for the next stage of the Allied advance in northern Italy. Four days later, the battalion came up against a strong German position in the village of Bulgaria. During an attack on the village, Brant and his section of five men were killed in a narrow ditch when they were caught by enemy fire from a flank. Brant was buried in a temporary grave by the roadside and his remains were later reburied in the Commonwealth War Graves Commission Cemetery at Cesena (Italy).

A marble memorial in Tyendinaga Mohawk Territory in Deseronto, Ontario is dedicated to the memory of local Second World War fatal casualties (see also Indigenous Peoples and the Second World War). Brant’s name is engraved on the stone along with a dozen others. There is also a Huron Brant Drive in the territory.