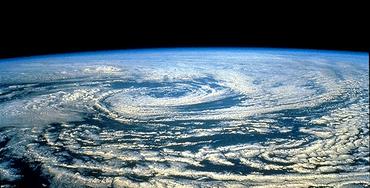 Cyclones are the circulation of the air around an area of low pressure (courtesy NASA/Masterfile).

The great storm of 1873 left over 1000 ships stranded on the coast of Cape Breton Island and killed some 500 people (courtesy Nova Scotia Museum).

One of the mightiest storms ever to hit North America struck southern Ontario in October 1954\r\n(courtesy CBC).
PreviousNext

Hurricanes are enormous, spiralling, tropical storms. The United Nation's World Meteorological Organization estimates that in an average year, 80 such storms worldwide kill up to 15 000 people and cause $2 billion worth of property damage. In the Atlantic Ocean, hundreds of weather disturbances breed within 20° latitude of the equator in the easterly trade WINDS over the tropical ocean, though fewer than 10 a year are full-fledged tropical cyclones or hurricanes.

Many factors are involved in their creation. With most, intense sunlight heats the ocean, which in turn warms the overriding air by convection. The heated air rises, carrying away evaporated water charged with energy and producing an area of low pressure. The process quickens as more and more air and water spiral upwards, cool, condense and release the sun's energy stored in the evaporated water.

As the storm intensifies, the pressure in the centre column is further lowered, creating a partial vacuum. More ocean air is sucked in and sent higher into the atmosphere as the whirlpool-like vortex spins faster. Within a few days, the minor depression that began on a calm, humid day is transformed into an enormous whirling storm. One factor crucial to storm formation is the inward spiralling motion initiated by the Earth's rotation - a counterclockwise motion in the Northern Hemisphere and clockwise in the Southern Hemisphere.

Heart of the Storm

Adjacent to the storm's central column through the spiralling wall of cloud, the strongest winds swirl at more than 180 km/h accompanied by a constant deluge. At the heart of the storm exists a calm, dry centre known as the "eye." Many people have been lured from shelter when the eye passed deceptively overhead, only to be caught by more violent winds from the opposite side of the hurricane. The main system of cloud, rain and wind extends about 30-60 km out from the centre of the eye.

At some point, the young hurricane starts to move slowly, usually advancing at 15-25 km/h. Once the storm moves out of the tropical zone and into cooler northern latitudes, it quickly dies out - either starved for heat energy and moisture or because it encounters land and is dragged apart by ground friction. The farther north from the equator the storm gets, the more likely it is to get caught in the prevailing westerlies and eventually recurves to the north and northeast. That is the main reason hurricanes seldom strike with full force.

The average lifetime of a hurricane is 9 days, but some may last from a few hours to a whole month. The North Atlantic hurricane season extends from June through November, although 84% of the storms occur between August and October, reaching their greatest fury and frequency in September.

The most destructive elements of a hurricane are often the huge waves, storm tides and flooding it generates. For a day ahead of the storm, the ocean builds into a wall of water that comes crashing ashore. Sea levels are pushed up by as much as 5 m higher than normal tides, flooding low-lying coastal areas. Hurricanes frequently spawn TORNADOES with even higher wind speeds.

Of the 10 tropical cyclones that develop each year in the North Atlantic, only 6 will be hurricanes, and only one or two will enter the cool Canadian waters. The year 1995 was a notable exception, with 9 tropical storms entering Canadian territory, of which 5 were hurricanes. Generally, the only regions affected in this country range from the Atlantic provinces through Québec to Ontario east of Lake Superior.

Very seldom do hurricanes stray into Canadian Pacific waters (where they are called typhoons), which are too cold to sustain hurricane intensities. Typhoon Freda, or at least its remnants, struck the Pacific Northwest on 12 October 1962. In Victoria, where winds reached sustained speeds of 74 km/h with gusts to 145, there were 7 storm-related deaths and damage exceeded $10 million.

HURRICANE HAZEL is the most remembered storm in Canadian history, striking southern Ontario on Friday, 15 October 1954. In its wake, the storm left 81 dead and $100 million damage. Hurricane Beth on 16 August 1971 produced more rain than Hazel, dumping 296 mm of rain on NS. The deadliest hurricanes ever to strike Canada were the cyclone that hit the Maritimes on 25 August 1873 (1200 vessels lost) and the "Independence Hurricane" that struck Nfld on 9 September 1775, drowning several thousand British seamen.