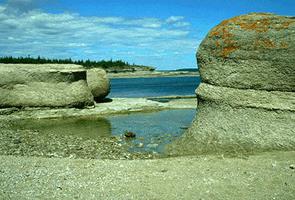 The islands' rocks are a striking example of sedimentary rock formations left by retreating glaciers, and are noted for picturesque limestone cliffs (Corel Professional Photos).

Îles de Mingan, Québec, are some 40 islands stretching for 155 km in the Détroit de Jacques-Cartier between Île d' Anticosti and the north shore of the St Lawrence River, 228 km east of Sept-Îles. They are a striking example of sedimentary rock formations left by retreating glaciers, and are noted for picturesque "flowerpot" rock formations and limestone cliffs. The islands are a sanctuary for migratory birds and seabirds, and a feeding area for blue, fin and other whales. Naturalists have identified 256 species of wildflowers here.

Native burial grounds indicate they were inhabited before Jacques Cartier first reported the islands in 1535. Surveys have also uncovered 16th-century Spanish coins and the remains of Basque habitations. Comte de Frontenac gave the islands to Louis Jolliet in 1679 for cod fishing and seal hunting, which remained the chief uses. The Hudson's Bay Company gained title to the islands in 1836 and sold them to Siebens Oil and Gas Company in 1973. Dome Peteroleum Ltd became the owner when Siebens's assets were taken over in 1979. Geological surveys identified industrial uses for the limestone deposits, but they were never exploited. The islands are now protected by Mingan Archipelago National Park Reserve (1984).