Adapting. It's a buzzword among the Inuit, and for good reason.

This article was originally published in Maclean's Magazine on February 19, 1996

Adapting. It's a buzzword among the Inuit, and for good reason.This article was originally published in Maclean's Magazine on February 19, 1996 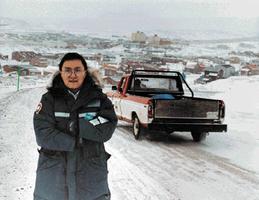 Mayor of Iqaluit, chosen as the capital of Nunavut (courtesy Maclean's).

Inside Iqaluit's Navigator Inn, delegates to a northern telecommunications conference are taking a spin on the information highway. The room is buzzing with talk of accessing the Internet, videoconferencing and otherwise "wiring" the Arctic. Outside it is -30° C, with a bracing wind that makes it feel more like -50° C, and the sun is already setting even though it's only 3 p.m. The climate is a constant reminder - like the jet-black ravens circling overhead and the caribou roaming the cliffs above town - of the harsh, beautiful land surrounding this modern community of 4,000 on the southern tip of Baffin Island. And while the contrasts may seem jarring to an outsider - the primordial Arctic meets the global village - to people like Iqaluit Mayor Joe Kunuk, who participated in the daylong high-tech conference, it is all part of an inexorable march to the future. "The leap we've made from hunting and gathering to the life we have now, it's amazing," says the 36-year-old Kunuk. "The key is that we've kept adapting."

Adapting. It's a buzzword among the Inuit, and for good reason. When the whalers came, the Inuit joined their crews; when the missionaries arrived, they adopted their religion; and when, over the past four decades, the government bureaucrats moved in, the Inuit abandoned their hunting posts for tiny Arctic settlements like Iqaluit and began to live according to the rhythms of the wage economy. Now, they are preparing to make perhaps their biggest leap yet: the establishment, in 1999, of the new Inuit-dominated territory of Nunavut (meaning "our land" in Inuktitut), a swath of almost one million square miles of tundra and sea ice - roughly a fifth of Canada's land mass - that is being carved out of the existing Northwest Territories. At the centre of the action is Iqaluit, which in an Arctic-wide plebiscite in December was chosen by a 60-40 margin over Rankin Inlet to become the capital of the emerging territory.

Until recently, Iqaluit was known to the outside world (if it was known at all) as Frobisher Bay, named for the British explorer Sir Martin Frobisher, who landed in the area in 1576 mistakenly thinking he had discovered the Northwest Passage to the Orient. Among Frobisher's exploits was the abduction of several Inuit, whom he took to England to parade before the Royal Family - and then left to die of disease. Unimpressed by that legacy, the town opted in 1987 to adopt the community's traditional Inuit name, which means "many fish." For southern-based journalists, the name change proved problematic: following the norms of English grammar, they tended to insert an extra "u" and spell it "Iqualuit." The change is a source of some consternation among residents since, under that spelling, the town's name is transformed into a vulgar term that roughly translates as "big rear end."

Iqaluit's modern history began during the Second World War, when Ottawa gave the United States permission to build a local airbase to refuel supply planes headed for Europe. Later, as federal programs were transferred to the territorial government, Iqaluit became an administrative centre for the Eastern Arctic. The town has grown twentyfold since the war years, making it by far the largest community in Nunavut - a region that, for all its vast expanse, is home to only about 25,000 people. It also boasts many of the amenities that smaller northern centres lack, including a swimming pool, a private racquetball club and a 34-bed hospital.

The choice of Iqaluit as capital of Nunavut - which brings with it prestige but the prospect of only about 100 new government jobs - was not without its critics. In northern circles, Iqaluit has long had a reputation as a hard-drinking, sometimes violent, town. Linked to Montreal, 1,205 air miles to the south, by daily jet flights, and to the smaller Baffin Island communities through a number of regional carriers, the town is a key distribution point not only for food and other staples, but also for smuggled booze and drugs. And compared with the smaller settlements, where alcohol is tightly restricted, the drinks flow fast and furious in Iqaluit's bars and licensed restaurants. During the recent plebiscite campaign, Iqaluit's critics sometimes raised the spectre of the "sin city" of the Arctic becoming the standard-bearer for the new Inuit homeland.

Kunuk, who was born and raised in Iqaluit, readily acknowledges the town's image problems. For many years, he says, "people travelling or moving here would only know people who drank and thought there was nothing here but drinking." But more recently, he adds, there has been "a drive towards sobriety and dealing with the other factors that come into play when there's drug and alcohol abuse, such as sexual and spousal assault, child abuse and so on." In fact, in the summer of 1994, before he was elected mayor, Kunuk helped to organize one such community action. Upset by a recent rash of arrests of young people for alcohol and drug infractions, and by rumors of a local child pornography ring, more than 300 residents marched through the streets of Iqaluit demanding that bootleggers and drug dealers get out of town. "People were just saying that enough is enough," recalls Kenn Harper, a prominent local businessman who took part in the march.

Despite such efforts, Iqaluit's 16-member RCMP detachment is kept hopping, making about 1,700 arrests a year, most of them alcohol-related. Cpl. Peter Clark cautions, however, that the statistics may be a bit misleading, as police tend to respond to even minor incidents because of the extreme weather. "You realize that if you don't look into a disturbance-type complaint, somebody might end up exposed to the cold," he says.

That is no small consideration in a community where the average temperature in February is -27° C and, in the warmest month, July, a mere 8° C. The harsh climate may also be why Iqaluit has one of Canada's more eccentric taxi services. For $3.50, cabbies will drive anywhere in town. The only catch: they pick up other customers as they go, until the cab is often chock-full, and drop them off not in any particular sequence, but as the route dictates. Still, it is one of the few bargains in a place where a litre of milk costs $2.30, a head of lettuce goes for $4 and a ham-and-cheese sandwich in a local restaurant can run up to $15.

The cold and the high costs aside, Iqaluit is a place that many transplanted Canadians are happy to call home. Some, in fact, say that the move north changed their lives in profound ways. Jim Bell, a longtime editor with the Iqaluit-based weekly newspaper, the Nunatsiaq News, arrived from Toronto in 1979, and within a few months found himself selling ads for the newspaper, but still unable to afford a place to live. One day, he recalls, an Inuit man he had never met before came into the office and offered him a place to stay, free of rent, until he got on his feet again. "I'll never forget that act of generosity," says Bell. "But you know, it's not unusual for southerners to be treated that way." Bell, whose political beliefs ranged from "anarchism to New Left socialism" when he left Toronto, says that he has grown to appreciate many of the things the Inuit have traditionally valued, such as family ties and self-reliance - principles he used to denigrate when living in Southern Canada.

The arrival of people like Bell has contributed to the ethnic diversity of Iqaluit. Numerically, it is the least Inuit of any of the Arctic communities - Inuit make up 60 per cent of Iqaluit's population, compared with 85 per cent in Nunavut as a whole - but, in some ways, it is also the most Canadian. A meeting place for the races and cultures, Iqaluit has attracted Inuit from across the Arctic, as well as healthy numbers of Quebec francophones, Newfoundlanders and expatriate Scots. And, like many northern centres, the town has a strong nationalist streak. On the day that 150,000 people gathered in Montreal last October to plead with Quebecers to stay in Canada, far from the national spotlight more than 100 people in Iqaluit braved Arctic winds to stage a similar pro-unity rally, and to sing O Canada in English, French and Inuktitut.

Among the resident patriots is John Amagoalik, a veteran Inuit politician and a man often referred to as the "father of Nunavut." Amagoalik concedes that there are some similarities between the drive for Nunavut and the Quebec separatist cause - after all, the Inuit say they need a government independent of the one now based in Yellowknife, 2,300 km west of Iqaluit, to protect their language and culture. But according to Amagoalik, Quebec's separatist leaders "invent grievances against Canada," while aboriginal people have very real ones. In his own case, Amagoalik, at the age of 6, became one of the so-called High Arctic exiles, a group of about 90 Inuit who were summarily relocated by Ottawa in the 1950s from their home in northern Quebec to even more remote communities in the Northwest Territories. "But for all its warts," says Amagoalik, "there's not a country that can stack up against Canada."

As for Nunavut, Amagoalik suggests that Canadians stay tuned for some surprises. For starters, the new territory will likely be the first in Canada to have a gender-equal legislature, with a man and woman elected from each riding. "There's going to be lot of firsts," he says with a shy smile. "We're a small people, but we have big ambitions."