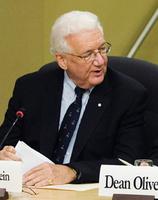 Jack Lawrence Granatstein, historian, professor (b at Toronto, 21 May 1939). After receiving a BA from the ROYAL MILITARY COLLEGE in Kingston, J.L. Granatstein completed an MA at the University of Toronto and a PhD at Duke University. While a student, he served in the Canadian Army, including two years in the Army Historical Section. Upon his graduation from Duke in 1966, he began teaching at YORK UNIVERSITY, where he was a full professor from 1976 until his retirement in 1995.

The most prolific Canadian historian of his generation, Granatstein has written widely on Canadian history and current affairs. His journalism, polemics, and academic writings are all characterized by lucid prose and an iconoclastic tone.

Granatstein was a critic of Canadian foreign policy in the 1960s and 1970s. He urged the government of Prime Minister Lester PEARSON to pull Canada out of NORAD and devote the country's military resources to peacekeeping. In two works co-authored with R.D. Cuff, Ties That Bind: Canadian-American Relations in Wartime (1975) and American Dollars, Canadian Prosperity: Canadian-American Economic Relations, 1945-1950 (1978), Granatstein examined the way Canada was drawn into the orbit of "the American imperial power."

In the 1970s and 1980s, Granatstein's study of the Canadian government during the Second World War, his two works on conscription, and his biography of William Lyon Mackenzie KING played a key role in rescuing the historical reputation of the former prime minister. Despite pettiness and eccentricities, King emerged in Granatstein's work as a skilled politician who managed Canada's war effort exceedingly well. Granatstein extended the analysis in How Britain's Weakness Forced Canada into the Arms of the United States (1989), challenging Donald CREIGHTON's view that successive LIBERAL PARTY governments had destroyed Canada by pursuing a close economic, political and military relationship with the US.

In the 1990s, Granatstein began gravitating toward military history. The Generals: The Canadian Army's Senior Commanders in the Second World War (1993) won two national awards. In Canada's Army: Waging War and Keeping the Peace (2002) Granatstein lamented the government's underfunding and neglect of the military.

In several works, Granatstein showed his skill as a polemicist. The Great Brain Robbery: The Decline of Canada's Universities (1984) and Petrified Campus: The Crisis in Canada's Universities (1997), both co-authored with David Bercuson and Robert Bothwell, attacked Canadian universities for conducting mediocre research and providing a substandard education to students. Who Killed the Canadian Military? (2004) blamed bureaucrats, generals, politicians, and ultimately the Canadian people for what Granatstein saw as the sorry state of the Canadian ARMED FORCES.

The most influential of Granatstein's polemics was Who Killed Canadian History? (1998), which argued that Canadians knew little of their past. Schools and universities emphasized racism and sexism in Canadian history, Granatstein argued, while Canada's real accomplishments were ignored. National history needed to be taught, because it served a "public purpose," unifying a large and diverse country. The book aroused the ire of the academic community by characterizing Canadian historical scholarship as often trivial and poorly written. Although rejected by many historians, the book became a national bestseller and helped increase Canadians' awareness of their history. Some provinces increased the emphasis on Canadian history in their schools' curricula. Lynton (Red) Wilson, Charles Bronfman, and several other business executives donated the funds to start the Historica Foundation with the goal of increasing public knowledge of Canadian history. Granatstein himself was appointed director and CEO of the Canadian War Museum, where from 1998 to 2000 he played a leading role in creating a new building for the institution.