"We landed in France on a metal strip. I had a sniper bullet go across my head as I landed as I was taxing in and we slept in slit trenches and tents, ate bully beef and did our, we attacked the Germans."

"We landed in France on a metal strip. I had a sniper bullet go across my head as I landed as I was taxing in and we slept in slit trenches and tents, ate bully beef and did our, we attacked the Germans." See below for Mr. Hilton's entire testimony. Please be advised that Memory Project primary sources may deal with personal testimony that reflect the speaker’s recollections and interpretations of events. Individual testimony does not necessarily reflect the views of the Memory Project and Historica Canada. 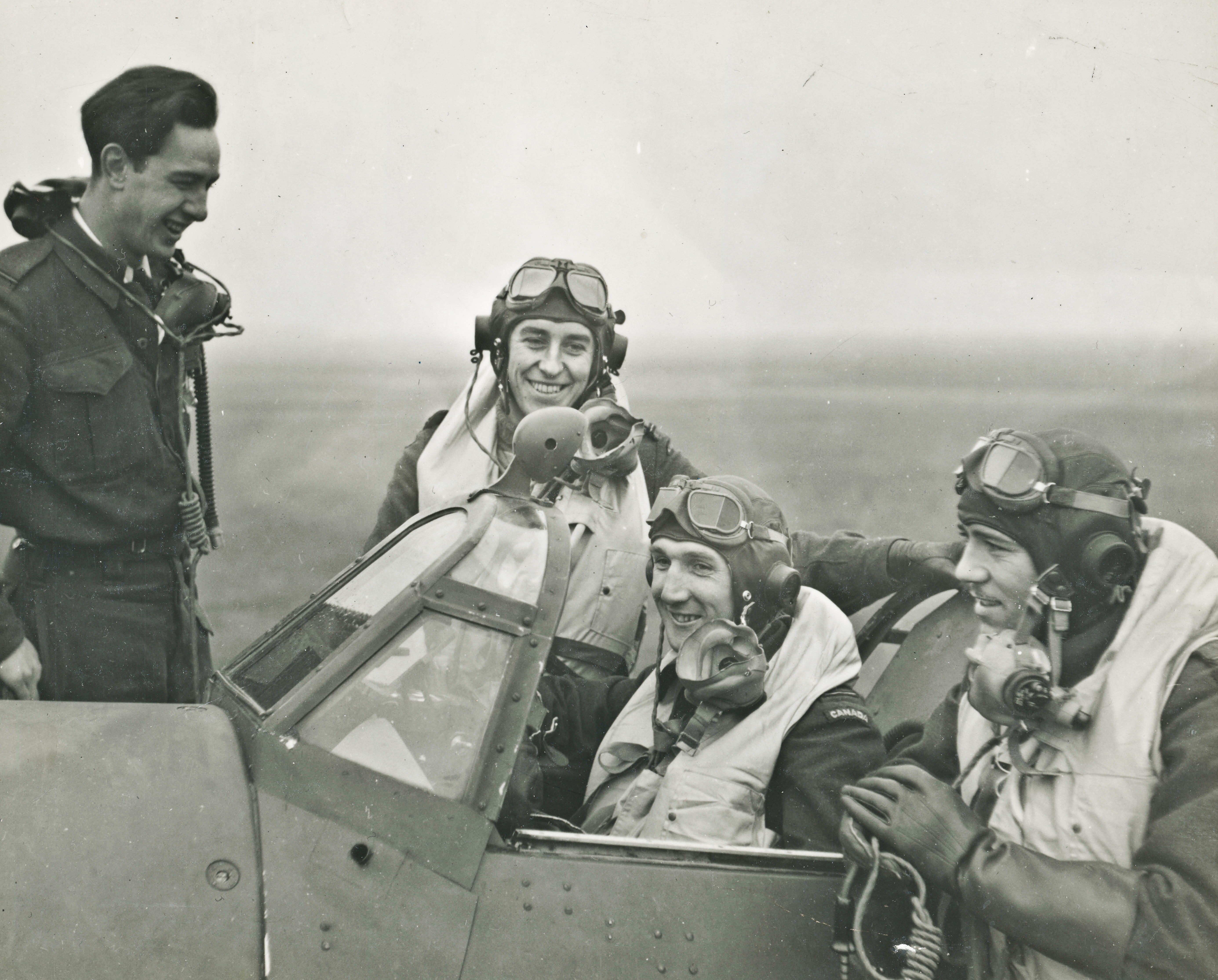 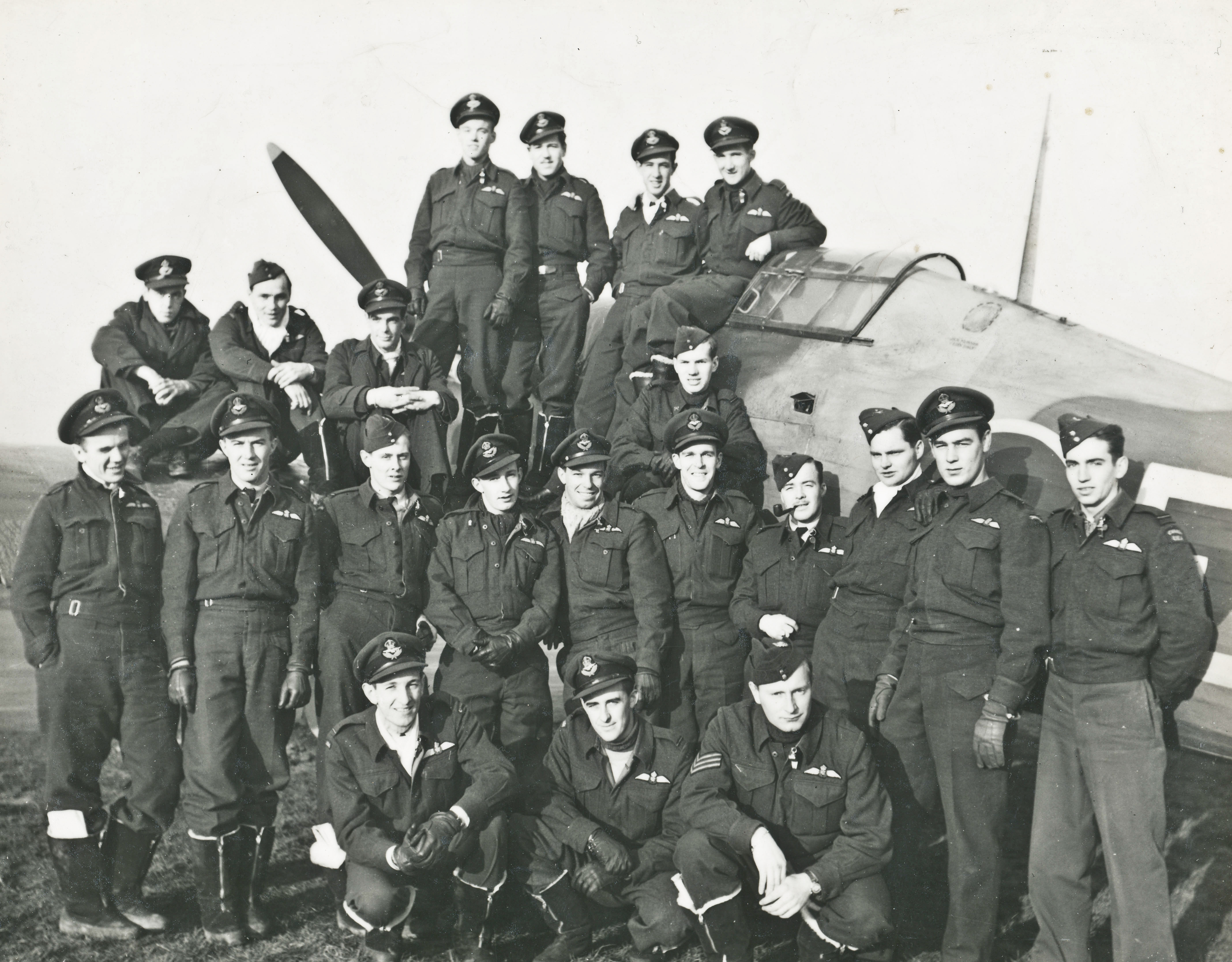 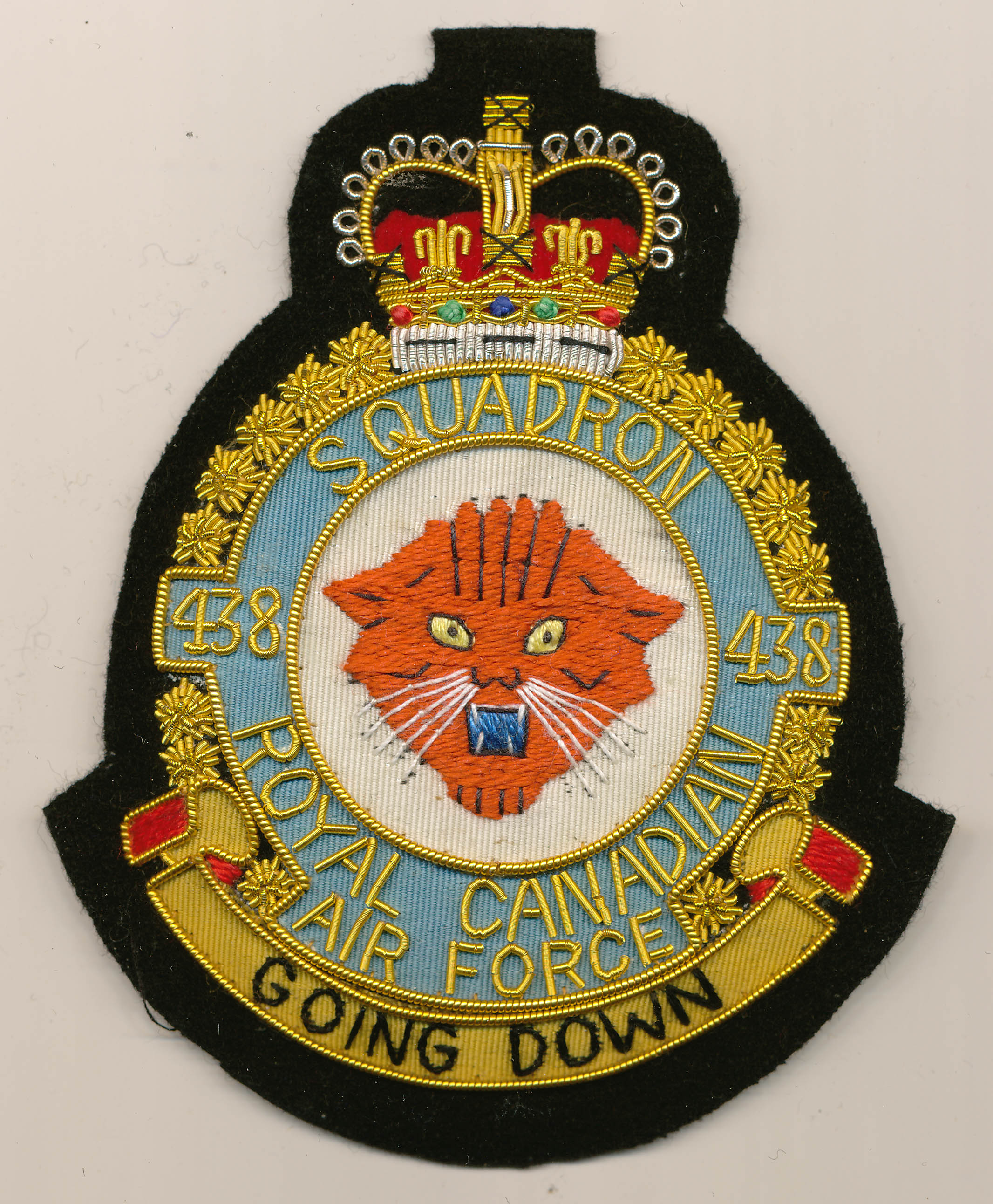 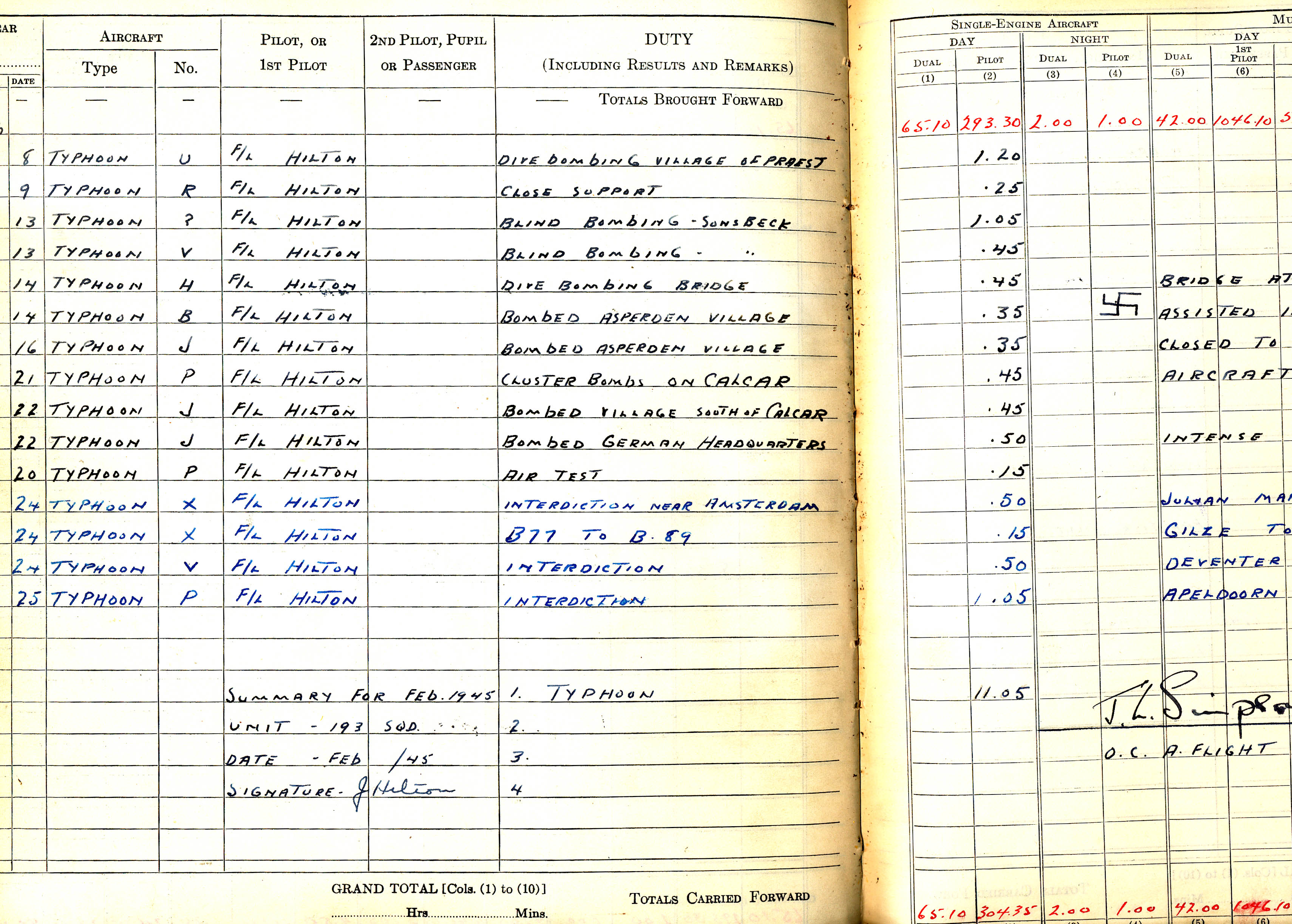 But we didn’t get that much training. Actually, to fly the Typhoon [the Hawker Typhoon single-seat fighter-bomber], we had a ‘tech rep’ they call them from the factory, he’d never flown. He built them but not flown them so he stood on the wing and he pointed out the features of the airplanes, here’s how you bring you wheels up, here’s how you turn your gas on, here’s how you start it. And don’t do this and don’t do that. And then he patted you on your shoulder and said: ‘You’re on your own.’ That was the orientation we got to fly the Typhoon. And you took off and the best landing you made is usually the first one. After that, it was controlled crash.

One close call was running into about 50 German airplanes with four of us, who we were flying into the German airfield, eight of us, and of course, two had engine trouble, they turned back and their buddy goes back with them so left four. So we were flying along and we looked down and there’s the Germans coming out of their air field, where we were going to go and there were at least 50 of them all in a gaggle. They used to fly with the new guy, an experienced man in the centre and the others are essentially a bunch of bees, and we looked down at them there, we just rolled over and went right to them. I never saw so many black crosses in all my life. But with 50 airplanes, you don’t have a chance, you fly her as you went through and kept on coming home. Well, you fire as you’re going by and if you’re outnumbered, if you get anybody, as you sprayed them with your cannon fire, you called yourself lucky. One of our guys tried to stay and fight but you can’t fight 50 airplanes, not with four of you. He didn’t come home.

We did close support for the army on D-Day [the Normandy invasion of June 6, 1944]. We went at some guns sitting in the cliffs when the troops are landing. And we were only about 1,800 feet sitting because it was so foggy and raining. It was terrible weather, absolutely terrible weather. And we could only climb up to about 1,800 feet. So we had to go at the cliffs, right at the cliffs, where the boys were landing, to try and take out the gun emplacements that were sitting right inside the cliffs. So we went in and lobbed our bombs right at them.

And then we went from there over the beach and attacked a bunch of army convoys that were coming in from the German side. Oh, the anti-aircraft fire was just fantastic. They were very accurate. We attacked a train, there was a train running around Holland all the time and we could never catch it because they would stop in a Dutch village and we wouldn’t fire at the Dutch village because of thatch roof make fire and so on, so we try and catch this stupid train. Well, one day we caught the train and oh boy, there were four of us and we circled around, the four of us came in lined abreast, and we came in at the boxcars right down on the boxcar height and the sides fell down and they were loaded with anti-aircraft guns. And if you ever look down the barrels of anti-aircraft guns, it’s not too comfortable. So we went straight at them and then pulled up over above them. And I went down over the trees and my squadron leader pulled up and he got his tail shot off. You never pull up, you go straight ahead, get below their gun levels. So it was quite an experience looking down multi-pom pom anti-aircraft guns.

And we were over the Rhine [river] one time, four of us, and I got hit twice by anti-aircraft gun, we were about 20,000 feet. And the thing hit me so accurately, it just took the paint right off the nose of my airplane, just like a sand blast. I was all set to jump, I had my leg over the side and I was watching my temperature, holding the control column with one hand and the temperature stayed the scale, so I just climbed back in and strapped in and kept on going. Little things like that are exciting.

We knew something was coming because their planes were all painted with the white stripes on it, black stripes [with reference to allied aircraft specially painted in anticipation of the Normandy landing], and we knew something was coming because the army was moving, every tree had a Churchill tank [heavy British infantry tank Mk. IV (A22)] or an armored vehicle, a place, I don’t know why it didn’t tilt into the sea. Everything had army all over the place, so we knew right away.

It was an awful, mainly it was watching those boys land and run up the beach [during the Normandy invasion]. You watch and see these little ants run up the beach and thought: ‘Oh my God, they’re real heroes.’ And yet when I bumped into a friend of mine, he was in the army and he was going on a night patrol and he said: ‘Gosh, Jack, I wouldn’t want to do your job. And here he is, getting all blackened up, going out on patrol against the German slit trenches. I said: ‘I wouldn’t want your job either, so it’s whatever you’re trained for.’

Yeah, well, we landed in France six days after D-Day. We landed in France on a metal strip. I had a sniper bullet go across my head as I landed as I was taxing in and we slept in slit trenches and tents, ate bully beef and did our, we attacked the Germans. We used to be what they called like an ‘airborne artillery’, actually. They’d use us as a cab rank, we patrol up and down behind the Canadian lines. Then the army would get into some kind of trouble with an armored enclosed pillbox and they’d spire in yellow shells and pull back and then they’d call us in. And we’d go down and shake the boys up [the Germans] that were in the pillbox and the army would move back to take over the pillbox.

We had bombs and one of our squadrons had rockets. We carried 25 pound warheads and they had eight rockets, four under each wing. But my squadron carried bombs.

Well, I got shot down over Dunkirk [France] actually. On the way into my RAF squadron, we got over Dunkirk too low and the anti-aircraft shot out one of our twin engine airplanes, shot off one of our engines, so we crash landed and we went to work the next day, flying airplanes. There was never any brief counts or anything like that nonsense, we just climbed in and away we went. Get shot down one day and you go fly the next.