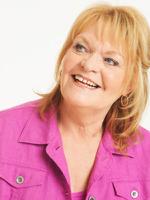 Janet Wright, stage, television and film actor, theatrical director (born 8 March 1945 in Farnborough, Hampshire, England; died 14 November 2016 in Vancouver, BC). Janet Wright immigrated to Calgary with her parents in 1946. The family eventually settled in Saskatoon, where Wright grew up in a family of talented theatre actors including siblings Susan, John and Anne Wright.

In 1974, Wright co-founded Persephone Theatre in Saskatoon with ex-husband Brian Richmond and sister Susan Wright. The most successful production at Persephone during their tenure (1974-76) was Cruel Tears, playwright Ken Mitchell's clever musical adaptation (with the assistance of local folk group Humphrey and the Dumptrucks) of Shakespeare's Othello set in modern-day Saskatchewan. It was first performed in Saskatoon in March 1975 and the original cast included all three Wright sisters. It went on the Arts Club Theatre's National Tour, directed by Brian Richmond and assistant-directed by Wright, who played the role of Flora Deal. More than 30 years after she helped to introduce it to audiences in Saskatoon, the Persephone Theatre is a successful, well-established regional theatre.

Her next affiliation was with Vancouver Arts Club Theatre, where she became its first dramaturge. She honed her considerable acting skills there, appearing in lead roles in several plays, including Memoir, The Club, Miss Margarida's Way and Hedda Gabler. Wright appeared in and directed more than 40 productions for the company.

As her reputation grew, she began to play prominent characters on stages across the country. She appeared in several productions at Canada's foremost theatres, including The Seahorse at Neptune Theatre, Moon for the Misbegotten at Theatre Calgary, Not Wanted on the Voyage at Manitoba Theatre Centre and A Lie of the Mind at Vancouver Playhouse.

Wright forged a strong working relationship with the Stratford Festival in Ontario, as both an actor and a director. Her successful appearances there included a performance alongside her sisters Anne and Susan in an acclaimed production of Les Belles Soeurs. She later won praise for her masterful and insightful direction of Stratford's 1998 production of The Prime of Miss Jean Brodie, starring Lally Cadeau in the lead role.

In addition to having a prolific career in Canadian theatre, Wright established herself as an exceptional film actress, making countless appearances on TV and in movies dating back to the early 1970s. One of her earliest and best roles was a small part in Robert Altman's McCabe and Mrs. Miller. Her most recognized movie role was that of Ethel Shapford in director Wolfgang Petersen's A Perfect Storm, where she worked with George Clooney, Mark Wahlberg and Diane Lane. She received Genie nominations for her work on Canadian TV and won best performance by an actress in a leading role in 1992 for her work on Bordertown Café. She won a Gemini Award in 2003 for her supporting role in Betrayed.

Janet Wright was often recognized for her wonderful sense of humour and wry, self-deprecating wit, a testament to her strength and spirit. Her deep sardonic chuckle and sharp comedic timing were integral parts of her successful portrayal of Emma Leroy on CTV's Corner Gas (2004-09), perhaps the best-loved comedy in the history of Canadian TV.