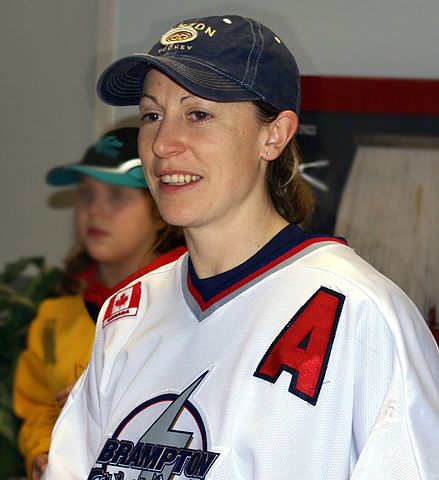 Jayna Hefford with the Brampton Thunder in 2008.

Jayna Hefford is the youngest of two children. Her mother, Sandra Hefford, was a teacher, and her father, Larry Hefford, worked for Corrections Canada for 35 years. He was an assistant warden at the Kingston Penitentiary at the time of his retirement.

Hockey was a major part of the Hefford household when Jayna was growing up. Her older brother Mike also played hockey (with Larry as the team manager) and won the Ontario Provincial Midget A Championship with the Kingston Township in 1990–91. Meanwhile, Sandra managed the Kingston Kodiaks Midget girls’ team.

Jayna started skating at age six. She credits her parents with encouraging her to pursue hockey at a high level when it was not popular for girls to play the sport. “They instilled a passion in me. They encouraged me to follow a dream even though it wasn’t that common for a young girl growing up at the time.”

Even though Hefford played with an all-girls team in Kingston, she regularly played against boys. Her club team needed to travel as far as Ottawa or Toronto to play against other girls’ teams. “I still felt like I was a girl playing a boys’ sport,” Hefford told The Canadian Press in 2013. “When I was really young, six or seven, starting to play hockey, I always thought I would play in the NHL.”

While playing minor hockey for the Kingston Kodiaks from 1988 to 1996, Hefford scored 907 goals and 495 assists for 1,402 points in 478 games. She set the record for most goals by a Kingston minor hockey player (male or female). During one season in Pee Wee, Hefford had an amazing 232 goals and 331 points.

COWHL and University of Toronto

At age 19, Hefford split her time with the Mississauga Chiefs of the Central Ontario Women’s Hockey League (COWHL) and the University of Toronto Varsity Blues of the Canadian Intercollegiate Athletic Union. With the Chiefs, Hefford was second in team scoring with 32 goals and 34 assists for 66 points in 30 games and was a COWHL first team all-star. As a freshman with the Lady Blues, Hefford was even more brilliant as she led the league with 34 points (23 goals and 11 assists) in only 12 games. She was named the Ontario Women’s Interuniversity Athletic Association rookie of the year and was a first-team all-star.

Hefford’s offensive excellence throughout the 1996–97 season helped earn her a spot on Team Canada for the 1997 Women’s World Hockey Championship. The event was hosted throughout Hefford’s home province of Ontario, with Kitchener hosting the gold medal game. At 19 years of age, Hefford made the team despite being the only player on the roster who had attended the Team Canada selection camp for the first time. In five games, Hefford had one goal and three assists for four points. Canada won the gold medal by beating the United States 4–3 in overtime.

At the 1999 Women’s World Hockey Championship in Finland, Hefford was the co-leader of the tournament in goals with five. She also led Team Canada with six assists and 11 points. Four of those points came in one period, as Hefford had one goal and three assists in a 10–0 win over Switzerland. Canada defeated the United States 3–1 to win the gold medal. Hefford and teammate Hayley Wickenheiser were both named to the media all-star team.

At the 2004 Women’s World Hockey Championship in Halifax, Hefford was the co-leader in the tournament with seven goals and was second to Jennifer Botterill with 10 points. Hefford and Botterill were both named to the media all-star team, and Hefford was named top forward. In the gold medal game, Canada beat the United States 2–0.

At the 2005 Women’s World Hockey Championship in Linköping, Sweden, Hefford led the tournament with six goals and was named the tournament’s top forward. However, Canada had to settle for silver after losing 1–0 to the United States in a shootout.

Hefford would go on to represent Canada at six more Women’s World Hockey Championships. Team Canada won gold in 2007 in Winnipeg and again in 2012 in Burlington, Vermont. In 30 games over that time, Hefford continued her scoring touch with 14 goals and 24 assists for 38 points.

At the 2002 Olympic Winter Games in Salt Lake City, Hefford finished third for Canada in scoring with seven points (behind Wickenheiser and Danielle Goyette, who each had 10 points). In Canada’s 11–0 win over Sweden, Hefford led the Canadian offense with one goal and three assists. In the medal round, Hefford scored two key goals for Team Canada: the game-winning goal that broke a 3–3 tie in a 7–3 win over Finland in the semifinal; and the game-winning goal with one second left in the second period in a 3–2 win over the United States in the gold medal game. Both of these goals were scored on the breakaway.

At the 2006 Olympic Winter Games in Turin, Hefford had three goals and four assists for seven points at her second straight Olympic Winter Games. She scored one goal and two assists in a 16–0 romp over host Italy, and had a goal and an assist against Sweden in a 4–1 win in the gold medal game.

Later in 2006, Hefford set the Canadian record for most points in one international women’s hockey game with seven as Team Canada defeated Finland 8–1 at the Four Nations Cup in Kitchener, Ontario. Hefford had three goals and four assists.

At the 2010 Olympic Winter Games in Vancouver, Hefford was part of the Canadian team that won the first Olympic gold medal in hockey on Canadian soil. Hefford was second on Team Canada in scoring (behind Meghan Agosta) with 12 points (five goals and seven assists). She began the Olympic tournament by tying a record for the most points in one Olympic women’s hockey game with six. She had three goals and three assists in an 18–0 win over Slovakia. Canada beat the United States 2–0 in the gold medal game.

In Hefford’s final Olympic Winter Games, the 2014 Olympic Winter Games in Sochi, she had one goal and two assists for three points. Her goal came in a 3–0 win over Finland in Group A action. Team Canada won its fourth straight Olympic gold medal by beating the United States 3–2 in a dramatic overtime game.

In 2007–08, Hefford helped the Thunder win the first ever CWHL Championship. She was named the CWHL most valuable player after having a league-high 26 goals and 58 points in 27 games. In 2008–09, Hefford set the CWHL record for most goals (44) and points (69) in a season. Starting in 2016, the CWHL awarded the Jayna Hefford Trophy to the league’s most outstanding player during the regular season.

Hefford was inducted into the Brampton Sports Hall of Fame in 2002, the Hockey Hall of Fame in 2018 and the Order of Hockey in Canada in 2019. She and her partner Kathleen Kauth are parents of three children, daughters Isla and Arwen and son Lachlan. Kauth won a bronze medal for the United States in women’s hockey at the 2006 Olympic Winter Games in Turin.