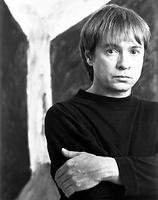 Perreault attempted to break the barriers between the arts by using dancers as singers and musicians to produce an integrated work of art (photo by Michael Slobodian).

Jean-Pierre Perreault, dancer, choreographer, scenographer, artistic director, teacher (b at Montréal 16 Feb 1947; d at Montréal 4 Dec 2002). He had wanted to be a visual artist but changed his mind at the age of 19 when he began dance training with Jeanne RENAUD and Peter BONEHAM at LE GROUPE DE LA PLACE ROYALE. His 1966 entry into dance was explosive; he studied classical as well as modern dance, becoming a teacher at Le Groupe's school in 1968. He was co-director of the company and its school by 1971. Les Bessons (1972) was the first of 23 decidedly experimental works he created for the company. Frequently controversial, his interest in breaking barriers between the arts was immediately evident.

In 1981, having followed Le Groupe to Ottawa, he resigned the co-directorship and returned to Montréal as an independent choreographer and teacher. Three years later he formed his own company, Fondation Jean-Pierre Perreault, and began to work on the massive scale that has characterized all his works since. Joe (1983), which has been remounted several times, was a seminal work for 32 dancers. Dark to the point of being depressing, yet touchingly human, it championed the hopes and fears of faceless masses who clambered up a steeply raked stage chasing elusive dreams. Perreault created the minimalist movement, sets, costumes and "music" - rhythmic variations dancers made marching in heavy army boots. Most works he has created since contain elements of Joe.

Perreault's enormous productions are costly to tour. However, Joe has been seen in Europe, the US and Canada; Nuit (1986) and La Vita (1993) were seen primarily in Europe. In 1991 Perreault made Flykt (The Flight) for Sweden's Cullberg Ballet. He also made 2 onsite outdoor works: Piazza (1988) for the First New York International Festival of the Arts, and The Highway '86 Event for Vancouver's EXPO 86. In 1996, a television adaptation of Joe, directed by Bernard Picard, was awarded a prize for the best studio adaptation at the 8th Grand Prix International de Vidéo Danse in France. The same year Perreault merged his dancers with those of Chrissie Parrott's group in Perth, Australia, where he created Eironos. Les Années de Pélerinages, Perreault's first piece to an existing score (by Liszt), was created in 1996. The year 1997 heralded the Montréal debut of Eironos, which, like Les Années, toured extensively in Europe.

Eironos was a large work along the lines of The Adieux Cycle, which was a group of monumental works: Îles (1991), Adieux (1993), La Vita (1993) and Instinct (1994). The latter was the first of 3 choreographic installations (Les Éphémères, 1997, and Les Ombres, 2001), which ran several consecutive hours a day for a couple of weeks. Viewers came and went at will from seats in individual booths from which they watched dancers dip seemingly at random into Perreault's repertory.

All of Perreault's choreographies have begun as drawings and paintings. These choreographic designs have been given a number of international solo exhibitions around the world, from Stockholm and Edinburgh to Antwerp and Québec City. Profits from a 1998 show, A Brush with Dance, were donated to rebuilding the company's home, a ramshackle church that in 2001 was transformed into Espace Choréographique. The $4-million space is complete with a small studio theatre and a huge one with a floor space large enough to accommodate Perreault's enormous works. Espace Choréographique is used for the choreographer's own projects as well as for events he organizes, such as the 2001 series L'Espace Dynamique, explorations in dance and architecture. Nuit was remounted in 2002. Throughout his long career, Perreault has created innumerable dances for such independent artists as Marc Boivin and Lucie Boissinot, Paul-André FORTIER, Daniel Soulières and others.

Perreault's television credits include Joe, directed by Bernard Picard for the CBC in 1996, and several portraits. Also in 1996 he was commissioned to choreograph a NATIONAL FILM BOARD production, L'Odysée sonore, directed by Louis Richard.

Perreault received the Jean A. Chalmers Award for choreography in 1990 and a grand prize in dance from the Montréal Urban Community Arts Council (1991 and 1993). The same body awarded L'Exil - L'Oubli top prize for artistic excellence in 1999. Perreault also won the Jean A. Chalmers Award for distinction in choreography in 1996, an honour that recognizes his entire body of work. He has been the subject of 2 books,Jean-Pierre Perreault, Choréograph (Les Herbes Rouges, 1991) and its English version Jean-Pierre Perreault, Choreographer (DANCE COLLECTION DANSE, 1992), and Regard pluriel, edited by Michèle Febvre (Les Heures blues, 2001).