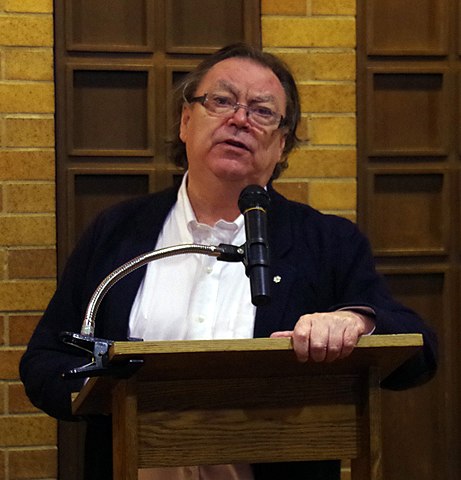 Jeffrey Spalding speaking at an event in Toronto in 2017.

Spalding undertook graduate study at Ohio State University (MA in art education, 1975). Simultaneously, he commenced study in 1973, admitted to the first entering MFA graduate class offered at the Nova Scotia College of Art and Design (MFA 1976). He was associated with the college as a student and teacher for much of that decade and became an assistant professor in 1977. In 1976–77, Spalding served as assistant curator at the Art Gallery of Nova Scotia in Halifax. In 1977–78, he was director of the Anna Leonowens Art Gallery at NSCAD.

The logic of Spalding’s early work was extended in The Black Paintings (1973–75), a notable series of square canvases (122 cm x 122 cm) evenly covered with 150 layers of almost transparent washes of acrylic paint. The paintings depend on a principle of colour theory in which the pigments of the three primary colours, or two complementary colours, together create black. Applied to the canvas in alternate layers, the washes of colour accumulate to create an impenetrable black. Each painting appears initially as an undifferentiated black square with only the drips of colour over the exposed edges of the unframed painting offering a clue to the process. A later group of paintings, The Diary Paintings (1976–79), explore psychological layering of meaning. They were made up of layers of paint applied successively one colour each day for a month, with each layer obscuring the one below and with a neutral grey applied on the final day.

From 1978 to 1981, Spalding was curator of art at the Glenbow Museum in Calgary. His first imagistic paintings, which were made in Calgary, continued the methods of his procedurally based abstractions. However, he now used systematic processes to yield structures that were imagistic, depictions of subjects with evident personal significance, interiors and views isolated from the artist’s domestic and working environments. In these works, potentially expressive and associative imagery, and the declared objectivity of means by which it is rendered, become a source of sustained, unresolved tension.

Procedural strategies continued to be a preoccupation in Spalding’s work through the 1980s. But a greater degree of illusionism gradually entered as narrative became more overt. A small painting dating from 1979–83, titled Niagara, initiated an extended series of panoramic views of the Niagara Falls that, referring openly to art historical traditions of the sublime and of 19th-century Romantic landscape painting, engaged definable cultural and aesthetic issues. Towards the end of the decade, further images of spectacular phenomena appeared in Spalding’s work (e.g., the Event paintings from 1989–90), still with a reference to landscape, but now occupied almost entirely by effects of light and atmosphere in the sky.

Images of romantic landscape continued to occupy Spalding. By 1996, he had taken up procedural concerns of his early abstractions in a series of geometric paintings.

In 1982, Spalding was appointed director/curator of the University of Lethbridge Art Gallery. There he built the country’s largest and most comprehensive institutional art collection focusing on 19th- and 20th-century art — Canadian, British, American and international. As a professor of art and assistant dean in the division of art at the School of Fine Arts at the university, Spalding taught in the studio and art history programs. In 1995, the newly established Institute for Modern and Contemporary Art in Calgary announced Spalding’s appointment as co-director, programmes.

In 1999, Spalding joined the faculty of Florida State University with a posting as director of their art museum, the Appleton Museum of Art in Ocala, Florida. He served there through November 2002. Thereafter, he became director of the Art Gallery of Nova Scotia until 2007. He was also president of Calgary’s Glenbow Museum through January 2009 and artistic director and chief curator at the Museum of Contemporary Art Calgary from 2009 to 2014. He also served as president of the Royal Canadian Academy of Arts from 2007 to 2010 and as chief curator of the Beaverbrook Art Gallery in Fredericton from 2014 to 2017.

Spalding died at the age of 67 after having a stroke while travelling from Fredericton to Toronto.

Spalding was made a Member of the Order of Canada in 2007 and received the Queen Elizabeth II Diamond Jubilee Medal in 2012. His work is in the collections of many major art museums in Canada, including the Musée d’art contemporain de Montréal, the Vancouver Art Gallery, the Art Gallery of Nova Scotia, the Beaverbrook Art Gallery and the National Gallery of Canada.