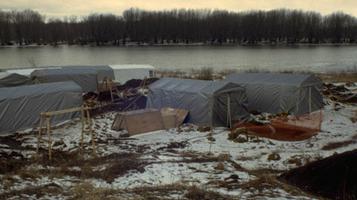 The Jemseg project continued through the fall and winter of 1996 and 1997, and team members had to innovate and adapt archaeological methods to a harsh Maritime winter by using tents and heat lamps to thaw the ground (courtesy Susan E. Blair).

Several thousand schoolchildren visited the site with their teachers during the project, where they learned about the archaeological field work, Wolastoqiyik life ways and, as shown here, laboratory analysis (courtesy Susan E. Blair) 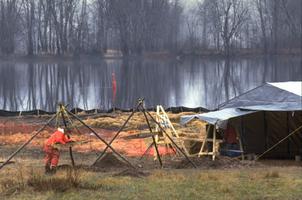 The early stages of the Jemseg project, with the Jemseg River in the background (courtesy Susan E. Blair)
PreviousNext

The Jemseg archaeological site (Borden site designation number BkDm-14) is a major archaeological site located in south-central New Brunswick, on the stream that connects the Grand Lake system to the lower Saint John River. This is a highly productive riverine environment, with access to the abundant resources of a system of wetlands bordering broad and fertile alluvial plains, known as the Grand Lake Meadows. This setting provided human foragers and settlers with access to rich fisheries, aquatic and terrestrial plant resources, large and small game, ranging from moose to muskrat, and migratory birds. As such, the area has been the focus of human activity through much of the last 10 000 years.

The archaeological and cultural importance of the Jemseg area has been long known to the First Peoples of the area, the Wolastoqiyik (Maliseet), who retain a rich reservoir of traditional knowledge about the area. The name for the area is derived from the Wolastoqiyik word for "gathering", referring to both resources and people. This importance was confirmed through a heritage assessment during the planning phases for a rerouting of the Transcanada Highway. This work recommended that a major project be undertaken to ensure that the highway would not impact on human burials, and to recover archaeological materials from the site. The resulting Jemseg Crossing Archaeology Project began in the fall of 1996 and continued through 1997. This project transpired through combined efforts on the part of Wolastoqiyik individuals and communities and the provincial government.

Preliminary explorations in 1996 revealed that the site was significantly more complex than had originally been thought. Artifacts and features were scattered over several broad terraces rising from the banks of the Jemseg river, and in the rich alluvium archaeologists discovered living surfaces with cooking hearths, stone tool fragments and tool-making debris, and pottery. Many of the living surfaces were older than this pottery, with some dating back 6th or 7th millennia, and producing characteristic ground stone tools, such as rods and net weights. The most intensive use of the site, however, occurred between 3200 and 2200 years ago, when people made small, flaked stone tools, such as spear or arrow points, and scraping tools, of both locally available and traded materials. Some of the pottery associated with this component was finished with impressions of fabric pressed into the clay, and is the oldest pottery yet recovered from the Canadian Maritimes. Although the naturally high acidity of the soil destroyed most of the food bone over time, charring of butternut shells in hearths resulted in their preservation, and indicated that use of rich resources from the nearby alluvial meadows may have drawn people to the site through time.

The full-scale excavation of the portion of the site that would be impacted by highway construction, beginning in early November, was synchronous with both growing concerns within Aboriginal communities about archaeology in general, and in particular, the nature and pace of the archaeological project, and with growing interest by news media and the general public. These concerns resulted in on-site protest, but also a high level of engagement from community members supporting archaeological research and the project.

Due to the involvement of First Nations community members, the archaeological components were enhanced by the contribution of insights and traditional stories from elders and community members. These revealed the close connection of Wolastoqiyik to the site for collection of plants for food and medicines, and for muskrat trapping and fishing, that continues to the present day. The project was also enriched by a public education program, which sought to create an appreciation and respect for the rich cultural heritage of Wolastoqiyik. During the course of the education program, tourists, interested members of the public and local residents, and large groups of school children visited the site.

The field components of the project were ended in April 1997, when a small basin-shaped pit coated with red ochre, a red pigment traditionally used in ceremonies, was encountered. While no human remains were found, the pit was similar to ceremonial features from other sites in the region. Based on this find, the project team advised that the highway alignment be shifted to avoid further impacts on possible burials.

The Significance of the Jemseg Archaeological Site and Project

The Jemseg Crossing Archaeology Project is one of the key archaeological projects in the Canadian Maritimes: it was the first major mitigation of a site under heritage impact legislation in the region, it pioneered excavation techniques oriented towards the logistics of winter excavation, it recovered archaeological information about periods of time that were previously unknown or poorly understood (especially periods older than 5000 years ago, and between 3500 and 1500 years ago), and it built on and expanded formal collaborative relationships between archaeologists, government organizations, and First Nations communities and individuals. In 2005, the Jemseg site was designated a Protected Provincial Historic Site. However, the lasting contribution of the project is the number of team members, both from First Nations communities, and from non-Aboriginal communities, who have gone on to work as archaeologists and in archaeological professions in the region.