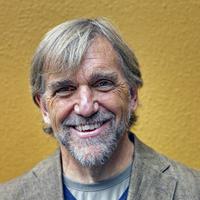 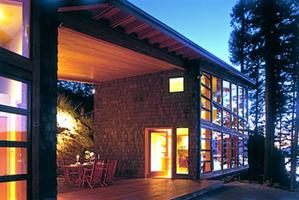 House on Bowen Island, 2004. In 2007 Sturgess Architecture won the Alberta Wood Works Award in the residential category for the design (photo by Robert Lemermeyer). 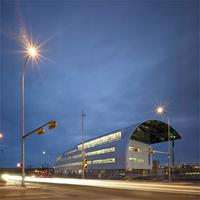 Jeremy Sturgess, architect, adjunct professor (b at Montréal 12 Dec 1949). Jeremy Sturgess grew up in Montréal and then Toronto, as part of a family of actors, artists, fashion designers and business people. He attended the University of Toronto, attracted by its emphasis on the sociology of architecture, and obtained a Bachelor of Architecture in 1974. Sturgess then moved to Calgary, where he worked first for architects Bill Boucock and Jack LONG; he became a member of the Alberta Association of Architects in 1977. He established the Architectural Alliance (1977), the Sturgess Partnership (1978-87) and was a principal (1987-93) of Jenkins and Sturgess Architects Ltd. He became a principal of Sturgess Architecture in 1993. He joined the Royal Architectural Institute of Canada (RAIC) in 1977 and was elected a Fellow in 1994; he was elected to the Royal Canadian Academy in 2002. He has designed single-family and multi-unit residences and major private and public buildings in Alberta, Yukon, British Columbia and Japan.

Jeremy Sturgess's designs are characterized by striking, unusual geometries, bright colours and thoughtful attention to site features and the larger urban context. Initially an architect specializing in postmodern and regionally appropriate houses, Sturgess's work gradually broadened its scope of design practice. Sturgess has developed a large body of residential design in and around Calgary; many of the houses - often featuring names with implied narratives, such as the "House for Whalewatchers" in Canmore, Alta - have won many design awards.

Jeremy Sturgess's larger designs were first celebrated for works characterized by a combination of contemporary features and Rocky Mountain design elements, such as exposed timber framing and details. The Post Hotel in Lake Louise, Alta, featured large gables, a stone base and exposed wooden façade. Its design inspired a Japanese client to commission the Chuzenji Kanaya Hotel (Nikko, Japan 1989), a luxury hotel overlooking Lake Chuzenji; the project won a 1992 Award of Excellence from Canadian Architect magazine and the Marronnier Award for environmental sensitivity for projects in Japan. The Banff Town Hall (1997), realized in conjunction with FSC Groves Hodgson Manasc Architects of Edmonton, utilizes similar ideas but also features the latest energy-saving features - a trend notable in the firm's later work. Another notable project is the 1991 Connaught Gardens housing development in Calgary. Characterized by simple, strong cubic white massing, the units in this project are grouped around a U-shaped courtyard and feature innovative varied planning and unit design, including in-law suites. The project was inspired in part by a visit to the site of the famous 1927 Stuttgart housing exhibition, which featured, among others, the work of Dutch architect J.J.P. Oud. Other significant public projects include the Alberta Pavilion for Vancouver's EXPO '86 (1984); the Yukon Visitors' Reception Centre (1990, winner of a Governor General's Award and with FSC Groves Hodgson Manasc Architects); a renovation for Calgary's Fish Creek Area Library (1994); and the Calgary Water Centre (2007), a building shaped like a cresting wave, with Manasc Isaacs Architects.

Jeremy Sturgess believes that economic and demographic variety in the city, both in form and use, is desirable, and he believes in improving standards in both urban design and planning. He designed the master plan for The Bridges, a large-scale multi-use urban planning project including housing and public amenities, as well as professional offices and shops, located on the site of Calgary's now-demolished General Hospital. This project, which won the Architectural Review/MIPIM International Award in France in 2005, was recognized for innovative planning; it included three-storey live/work units containing a business on the ground floor. Other urban design projects include the redesign of the first of 10 light rail transit (LRT) stations and pedestrian amenities on 7th Avenue in downtown Calgary with GEC Architects and Carlyle Landscape Architects, and Sturgess worked as a consultant with Foster and Partners for the Encana Corporation's "The Bow," which when designed was the tallest building west of Toronto.

Jeremy Sturgess has called for increased public discussion of architecture and co-founded the Calgary Architecture and Urban Studies Alliance (CAUSA) in 1978, serving as its director until 1990. Sturgess has also been involved in architectural education; since 1989 he has served as an adjunct professor in the faculty of environmental design at the University of Calgary. From 1985 to 1988 he was a member of the board of governors of the Architecture Foundation of Alberta, and between 1990 and 1992 he was a member of the Town of Banff's design advisory panel.