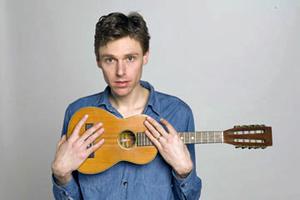 Joel Plaskett. Singer, songwriter, guitarist, producer, b Berwick, NS, 18 Apr 1975. Halifax-based Joel Plaskett began playing the guitar at age 13, and formed the band Nabisco Fonzie with Rob Benvie and Ian McGettigan the following year. The trio became The Hoods before joining forces with Michael Catano (replaced by Cliff Gibb in 1994 and Benn Ross in 1999) and adopting the name Thrush Hermit in 1992. Thrush Hermit, along with bands such as Sloan, quickly moved to the forefront of the early-1990s Halifax indie music explosion. After releasing several critically acclaimed albums and establishing a sizeable fan base, Thrush Hermit disbanded in 1999. While still performing with Thrush Hermit, Plaskett began writing material for his first solo album. He released In Need of Medical Attention (1999) shortly after the band's break-up. Plaskett's second solo venture, La De Da, an acoustic album, was released in 2005.

Joel Plaskett and The Emergency

In 2000 Plaskett began collaborating with his band, The Emergency (Dave Marsh, drums; Tim Brennan, bass, later replaced by Ian McGettigan and Chris Pennell). Their first album, Down at the Khyber (2001), showed an audible alternative-country influence and won praise from fans and critics. The group's second album, the '70s rock homage Truthfully Truthfully (2003), was produced by McGettigan and marked the band's debut on MapleMusic Recordings. The critically acclaimed concept album Ashtray Rock, which included the hit single "Fashionable People," followed in 2007. Plaskett and The Emergency garnered major critical and commercial success again in 2009 with their triple-disc collection, Three. The album's 27 songs were recorded at Plaskett's home with his father, folk artist Bill Plaskett, and singer-songwriters Rose Cousins and Ana Egge. A compilation of Plaskett's demos and other unreleased songs, Emergencys, false alarms, shipwrecks, castaways, fragile creatures, special features, demons and demonstrations (1999-2010), was issued in 2011.

Plaskett's lyrics often reflect his personal connection to Halifax. His tracks combine straightforward, approachable arrangements with sparse instrumentation, and draw on a variety of genres simultaneously, including folk, country, classic rock, and pop. He has frequently been called one of the best Canadian songwriters of his generation.

Plaskett has performed with The Tragically Hip, the Barenaked Ladies, and Paul McCartney. He has produced three albums for Canadian act Two Hours Traffic, and in 2009 he collaborated with Classified on the song "One Track Mind." Plaskett appeared on the CBC television show Rock Camp, and was featured as a busker in the film One Week (Michael McGowan, director, 2008).

In Need of Medical Attention. 1999. Independent

Down at the Khyber. 2001. Brobdingnagian Records BROB 007