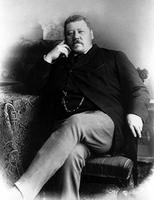 John Norquay, politician, premier of Manitoba, 1878-87 (b near St Andrews, Man 8 May 1841; d at Winnipeg 5 July 1889). One of Red River's most distinguished sons, Norquay successfully moved from the fur trade and the river lot into modern business and politics after Manitoba entered Confederation. His great-grandmother was an Indigenous woman and his paternal ancestors were jacks-of-all-trades at fur-company posts. He was one of the best students in Red River schools and was successively a teacher, farmer and fur trader between 1857 and 1870, when he was elected to Manitoba's first legislature. He rose quickly to prominence in the House, was a Cabinet minister (1871-74, 1875-78), and became premier upon the retirement of R.A. DAVIS on the basis of his strong following among "old" (pre-1870) settlers and French-speaking Manitobans.

The Norquay government successfully extended Manitoba's boundaries and secured larger federal subsidies, but it eventually foundered upon Canada's railway policy. Caught between PM John A. MACDONALD's guarantee of a CPR freight monopoly and Manitoban demands for rail competition, Norquay chose to fight Ottawa in 1887 by building a railway to the US. Macdonald intervened and, by an apparent double cross, precipitated a financial scandal and the collapse of the Norquay ministry. Though he briefly led a small opposition to the new GREENWAY government, Norquay's sudden death in 1889 prevented him from restoring his reputation in Canadian public life.

Norquay was widely liked in Manitoba. His name has been kept alive not only because he was the province's only premier of mixed European and Indigenous ancestry but because of his amiable disposition and considerable talents.