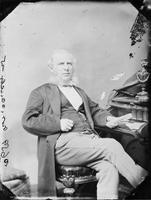 Jonathan McCully, senator, politician, journalist, lawyer, teacher (born 25 July 1809 in Cumberland County, Nova Scotia; died 2 January 1877 in Halifax, NS). Jonathan McCully was a strong advocate of Confederation in the Nova Scotia press from 1864 to 1867, writing pro-Confederation editorials for the Halifax Morning Chronicle and Unionist and Halifax Journal. He attended the Charlottetown Conference and the Québec Conference as part of the Liberal delegation from Nova Scotia. After Confederation, McCully became a senator and a judge of the Nova Scotia Supreme Court.

Jonathan McCully was born on his family’s 60-hectare farm in Cumberland County, Nova Scotia, the fifth of nine children for Samuel McCully and Esther Pipes. He attended a local one-room schoolhouse, teaching there between 1828 and 1830 to earn the necessary funds to study law. One of McCully’s students was Charles Tupper, the future premier of Nova Scotia (1864–1867). Following a five-year apprenticeship, McCully was called to the Bar in 1837 and opened a law office in Amherst, Nova Scotia.

In 1842, McCully married Elizabeth “Eliza” Creed, a Haligonian woman almost 10 years his junior, at St. George’s Anglican Church in Halifax. They had three children: a son, Clarence, and two daughters. The family settled in Halifax in 1849.

Jonathan McCully became a political journalist and supporter of the Liberal party from 1837 and, in addition to his legal career, was a prolific writer and editor. He began to write for the Acadian Recorder and became editor of the Halifax Morning Chronicle by 1857. After he was fired from the Morning Chronicle for his pro-Confederation views in 1865, he bought the Morning Journal and Commercial Advertiser, renamed it the Unionist and Halifax Journal, and continued to write in support of Confederation.

In 1848, Nova Scotia premier Joseph Howe appointed Jonathan McCully to the Legislative Council, a position he held until 1867. Over the course of his political career, he held a variety of offices related to the building of railways in the province. In 1853, he was appointed probate judge and, in this position, supported Howe’s railway projects, including the building of a line from Halifax to Truro, Nova Scotia. He served as railway commissioner from 1854 to 1857 and ran the Nova Scotia Railway from 1860 to 1863. His blunt opinions, overbearing nature and reputation as a social climber made him unpopular with his colleagues. A satirical verse about his management of the Nova Scotia Railway stated:

I am monarch of all I survey,
My will there is none to dispute,
Trains run when I want ’em to run.
And toot when I tell ’em to toot.

Jonathan McCully was persuaded of the merits of Confederation at the Charlottetown Conference of 1864, a conversion that was received with some cynicism by his colleagues in the Nova Scotia Legislative Council. McCully wasn’t supposed to be part of the Charlottetown Conference, but he was chosen by Charles Tupper as a replacement when one of the other delegates withdrew at the last minute. McCully recognized the social and economic benefits of Nova Scotia becoming part of a larger nation. In 1865, he wrote: “Local politics have become a farce, nothing more or less […] the only politics to divide parties […] who shall be high constable of the parish, first footman in a governor’s hall, or master of ceremonies at a political picnic. […] Small countries make small men.”

As premier of Nova Scotia, Tupper valued the support of McCully, his former teacher, in the face of opposition to Confederation from Nova Scotia’s business elite. Upon his return from the Québec Conference, he wrote to John A. Macdonald, stating: “We have had hard work here. A great body of the leading men, comprising the most wealthy merchants in the city, are exerting themselves to the utmost to defeat the scheme. [Adams George] Archibald and McCully have stood by me like trumps, and I hope we will carry the day.”

Sir John A. Macdonald rewarded Jonathan McCully for his support of Confederation with an appointment to the Senate, which he held from 1867 to 1870. While in the Senate, McCully was Chair of the Select Committee on Rupert’s Land, Red River and the Northwest Territory during the Red River Resistance in 1869. In 1870, McCully was appointed puisne judge on the Nova Scotia Supreme Court, which brought him favourable public opinion for his role in clearing the backlog of cases efficiently. He died in 1877, at the age of 67, leaving a substantial estate of $100,000.

Jonathan McCully’s career demonstrates the influence of political journalism on Confederation. His editorials and standing within Nova Scotia’s legal community contributed to a shift in public opinion in favour of Confederation.