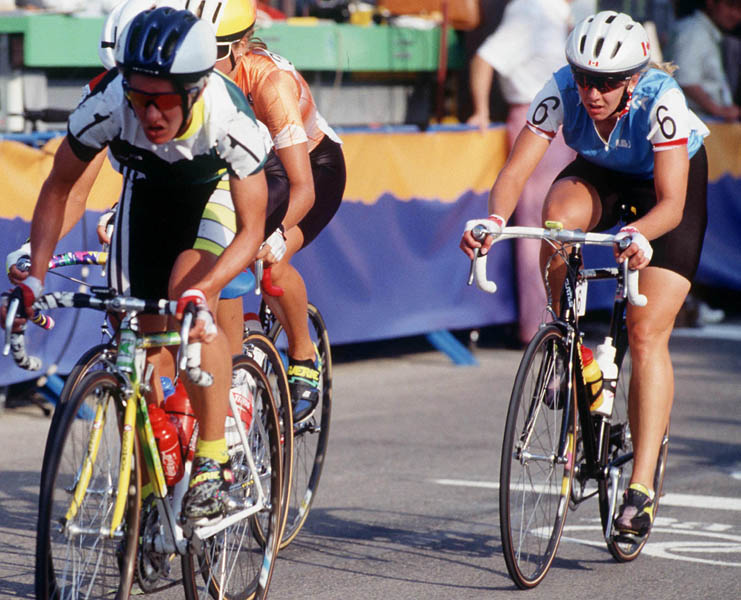 Canada's Kelly-Ann Way (right) competing in the road event at the 1992 Olympic games in Barcelona.

Kelly-Ann Way was born into a family of cycling enthusiasts and began riding at seven years of age. Her father and coach, Gordon Way, had been an accomplished cyclist in Great Britain. Way joined the Windsor Bicycle Club in 1975 and became a licensed cyclist in 1977, at 13 years of age. This allowed her to compete in sanctioned national and international races.

When Way was about 15 years old, she won the Ontario provincial road championship of 1979, defeating junior and senior competitors. The following year she travelled to Montreal to compete in her first national road race. In 1982, when she was still just 17, she won a silver medal in the individual points race and a bronze medal in the 3000m individual pursuit at the national track championships in Edmonton. In 1983, Way won the individual pursuit title at the national track championships in Montreal, as well as bronze medals in the 1000m time trial, the points race and the omnium. That year, she became a member of the Canadian National Cycling Team. She also began studies at the University of Windsor, completing her Bachelor of Human Kinetics (Honours) in 1987.

In 1984, Way rode in the first Tour de France féminin. Women had long been shut out of the Tour de France, which has been a men’s race since its founding in 1903. However, in 1984, the organizers decided to add a grand tour for female cyclists, which would occur at the same time as the Tour de France. Like the men’s race, it was held over three weeks, although the women rode 18 stages compared to the men’s 23 stages. The women rode a similar course to the men, including all the difficult climbs. However, the distances were shorter because rules set by the Union Cycliste Internationale (UCI) limited how far women could ride in races. (The women rode about 1,080 km in total, compared to the 4,000 km of the men’s race.)

Way was a strong contender in the 1984 Tour de France féminin, winning the eighth stage — a 70 km route from Aire-sur-l’Adour to Pau in Aquitaine, France. She completed the stage in 1 hour 52 minutes 39 seconds, beating Dutch rider Heleen Jacoba Wignen-Hage and American Marianne Martin, who would eventually win the Tour. Way was the first North American cyclist to win an individual stage in either the Tour de France or the Tour de France féminin. (American Greg LeMond won his first stage victory at the Tour de France in 1985, while Steve Bauer became the first Canadian to win a stage in the men’s race, in 1988.) After the 10th stage, Way was in fourth place overall. Unfortunately, she crashed on the 12th stage, damaging her shoulder. Despite her injury, she continued to race and finished 20th overall.

Way and American rider Katrin Tobin broke away from the peloton (or main group) during the fourth stage of the 1989 Tour, while climbing the 1,240m high col du Labouret. Although Tobin won the stage itself, Way’s time was good enough to leave her in first place overall, 23 seconds faster than Jeannie Longo of France, the previous leader and eventual champion. “Even Longo, arguably the best woman cyclist in the world, was staggered by the effort of Way and her Canadian team,” wrote Robert Zeller of The Globe and Mail. “‘Way was really flying today,’ [Longo] said after losing the yellow jersey to the Canadian. ‘No one could have stopped her.’” It was Way’s most successful Tour de France féminin, as she finished the race in 10th place overall, out of a total of 70 competitors.

DID YOU KNOW?
The Tour de France féminin was held between 1984 and 1989. However, despite the gruelling schedule and epic nature of the women’s tour, it was never as popular as the men’s race among the media or public. In 1986, Tour de France organizers decided to reduce the women’s race to two weeks and it ran in this format from 1987 to 1989. From 1990 to 1993 the race was changed to include other countries than France and was re-named the Tour de la CEE féminin (Tour of the European Community). In 1992 a French racing club created the Tour Cycliste Féminin, which was held in August and had no official link to the Tour de France (For two years it competed with the Tour de la CEE.). Renamed La Grande Boucle féminine internationale in 1998, it lasted until 2009. Another women’s race, La Route de France féminine international, began in 2006 but has been cancelled several times due to organizational problems.

Other National and International Successes

Way had several other cycling successes, both at home and abroad. In 1988, she competed at the Olympic Summer Games in Seoul, South Korea, placing 38th in the women’s individual road race. In 1989, she was fourth in the Tour de l’Aude in France. The following year, Way won the Tour of Tasmania, as well as the bronze medal in the individual pursuit at the 1990 Commonwealth Games in New Zealand. Also in that year, she placed second at the Women’s Gastown Grand Prix in Vancouver .

In 1991, Way took the omnium (best overall points) at the national track championships in Winnipeg. The following year, she set a Canadian record for the 3000m individual pursuit at the Canadian Olympic Road Trials in Calgary (Her record has since been beaten.). At the 1992 Olympic Summer Games in Barcelona, Way placed 14th in the individual pursuit and 31st in the individual road race. The same year, she won a gold medal at the national team time trials with Clara Hughes and Sue Palmer (Team Ontario). Way retired from competitive cycling in 1993. She works as a registered massage therapist in Windsor, Ontario. 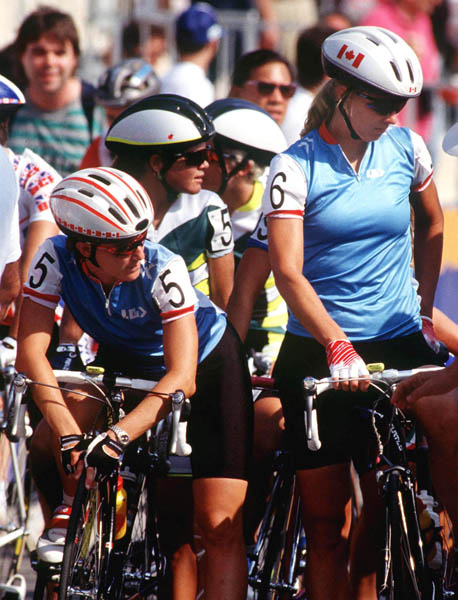 Canada's Alison Sydor (left) and Kelly-Ann Way competing in the road event at the 1992 Olympic Summer Games in Barcelona.