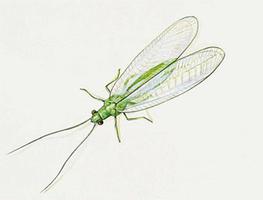 Most green lacewings have golden or copper eyes. They are found on foliage (artwork by Jan Sovak).

Lacewing is the common name for small, fragile insects of the 2 most common families (Chrysopidae, green lacewings; Hemerobiidae, brown lacewings) of order Neuroptera.

Most green lacewings have golden or copper eyes and are found on foliage. They are poor, erratic flyers and strongly attracted to light. Some 25 species occur in Canada, the most common of which are the common green (Chrysoperla carnea) and the goldeneyed (Chrysopa oculata), found in all provinces and territories except Nunavut.

Brown lacewings resemble greens but are generally smaller and less common. They frequent wooded areas. About 23 species are found in Canada; the most common, Hemerobius humulinus, occurs throughout the country below the treeline.

Eggs are laid on foliage or other objects, singly or in groups of 20 or more. Larvae are voracious predators, seizing small insects or arachnids with pincerlike jaws. Thus they are used for the biological control of insect pests. When fully grown, larvae spin cocoons, usually in secluded places.