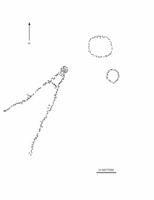 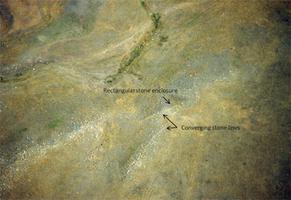 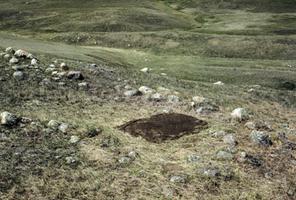 The Laidlaw archaeological site (Borden site number DlOu-9) is a pit trap used by pre-contact Indigenous peoples to hunt antelope and possibly bison as well. The site, discovered in 1982, is located on a terrace-like surface along the South Saskatchewan River valley wall in southern Alberta. There are four main features at the site. Feature 1 consists of two lines of stone converging towards and connected to a rectangular shaped stone enclosure. The two stone lines are 29 m and 35 m long while the enclosure forming the apex of the structure is composed of a well-defined band of stones, one to three stones wide and one or two stones in height. The enclosure's interior is 3.75 m wide at its westernmost end narrowing to 2.5 m at its easternmost end. The inside length of the enclosure is 7.1 m. Adjoining and just outside the easternmost end of the enclosure is feature 2, a circular mass of stones approximately 2.5 m in diameter. Features 3 and 4 are two tipi ring sized stone circles located in the near vicinity.

Two contiguous one metre square test pits were excavated within the rectangular enclosure and another two square metres within the adjoining circular mass of stones. Excavation within the enclosure revealed an upper cap of fine aeolian and colluvial sediments as much as 20 cm thick. Beneath lay a solid mass of large stones, several estimated to weigh well over 50 kg. The base of this mass of stone was encountered at an average depth of 80 cm below surface.

It appears that the surface stones outlining the rectangular shaped enclosure represent the base of a stone wall which surrounded a centrally excavated pit. Stones comprising all but the base of this surrounding stone wall collapsed inward, largely filling the excavated pit. Considering the amount of stone removed in excavation, it is estimated that this wall was originally some 80 to 100 cm in height. Thus, as originally constructed, the height from the bottom of the excavated pit to the top of the surrounding stone wall was probably at least from 160 to 180 cm. Excavation within the adjoining circular mass of stones indicated it probably represented a low stone walled structure that had also collapsed inwards. It originally was roughly large enough for a single individual to sit in comfortably.

Excavations within the rectangular enclosure resulted in the recovery of 23 small pieces of bone, including five which are identifiable as to element and species. All five identifiable pieces are either definitely or probably Pronghorn antelope (Antilocapra americana). An examination of the wall thickness of the remaining fragments suggests that all but two resulted from fragmentation of antelope-sized ungulate elements. The remaining two fragments are of thicker bone and may be referable to a larger ungulate - probably bison. A radiocarbon date derived from those bone fragments yielded an age of 3420+/- 130 radiocarbon years before present. No materials were recovered in excavations within the adjoining circular mass of stones.

Historic and ethnographic sources for the northern Plains indicate that antelope were second only to bison in economic importance among many Indigenous groups. Antelope were apparently as numerous as bison historically and were also gregarious, making their hunting using communal kill techniques feasible. Based on its overall form and associated antelope faunal remains, the Laidlaw site is interpreted as analogous to antelope pit traps described by ethnographers (eg, George B. Grinnell and Clark Wissler) for various Plains Indigenous Groups. Although of minor importance in comparison to bison, antelope hides were preferred for their lightness in making certain clothing items. As well, their meat was important when bison were scarce or not available.