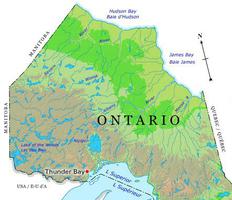 Lake Nipigon, 4848 km2, elevation 320 m, 165 m deep, located in northwestern Ontario, 100 km northeast of THUNDER BAY, drains south into Lake SUPERIOR through the Nipigon River. The name may be derived from the Ojibwa Animi-bee-gong ("continuous water"). In the 18th century, the Cree who occupied the area were gradually displaced by the present inhabitants, the Ojibwa. European visitors included RADISSON and DES GROSEILLIERS (1659-60), Father Allouez (1667) and DULHUT, who in 1684, in response to competition from the Hudson's Bay Company, built Fort La Tourette on the northeast shore of the lake.

Later posts were established by the NWC and HBC, but none grew into major settlements. With its limited population, unspoiled environment and abundant fish and wildlife, the area is ideal for outdoor recreation. The lake, the fourth largest in Ontario, supports a small commercial fishery and the adjacent forests supply pulpwood for mills in Red Rock and Thunder Bay. Since 1940 water has been transferred south from the ALBANY RIVER watershed, via the Ogoki Diversion, into Lake Nipigon, increasing its natural capacity and allowing the generation of 266 000 kW from 3 hydroelectric plants on the Nipigon River.