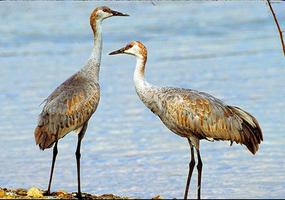 True cranes are easily distinguished from herons by their habit of flying with their necks outstretched (Corel Professional Photos). Sound of the sandhill crane (press the Sound button) courtesy Monty Brigham, Bird Sounds of Canada. 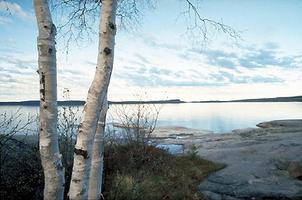 Natural History
Pink granitic hills and boulders dominate the landscape but lavas are found near Cape Gargantua and sandstones on the offshore islands. The mixed forest of maple, birch, poplar and spruce produces a magnificent display of colour in autumn.

The commonest mammal is the moose, but visitors may also see white-tailed deer, red squirrel, chipmunk, beaver, bear, wolf and some 250 species of birds, including Canada goose, heron and sandhill crane. Except for garter snakes, there are few reptiles. Animals such as caribou, lynx and pickerel feature prominently in the PICTOGRAPHS, visible especially along the coast.

Human History
The red ochre pictographs at Agawa Bay reflect some 10 000 years of aboriginal occupation. There has been sporadic mining for copper and gold, commercial fishing and lumbering. Early in this century the region attracted the attention of the GROUP OF SEVEN painters.

Facilities
Highway 17 runs north-south through the park, with 3 campgrounds along its route. Hiking and canoeing are popular in the park. Lake and river fishing and, in autumn, moose hunting are possible.