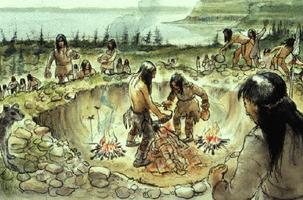 Artist's reconstruction. The body of the child has been placed face down and head to the west. A single large rock is about to be placed on the child's back, which is being sprinkled with red ochre (courtesy CMC).

These four artifacts were found buried with the child's skeleton at L'Anse- Amour. At the left is a flute made from the wing bone of a large bird. At the right is a large knife or spear point chipped from quartz. In the centre at the bottom is a pestle made of antler used for grinding red ochre. Above it is a toggling harpoon (courtesy Memorial University of Newfoundland).
PreviousNext

L'Anse Amour is an archaeological site, located on the Strait of Belle Isle coast in southern Labrador. It was occupied between at least 5500 and 2000 BC by Maritime Archaic aboriginals who used the area for fishing and hunting harp seals and walrus.

The site contains the oldest burial mound found in North America to this day. The mound is about 7500 years old. It has a circular shape and is 8 m in diameter. The mound is covered with large boulders, which protected an empty stone-lined burial. The skeleton of an adolescent child was found underneath. His body was covered with red ochre and accompanied by several stone and bone spearpoints and knives, a walrus tusk, a harpoon head, an ivory carving and a bone whistle. The burial ceremony must have involved at least one week's labour for the local hunting band.

After it was excavated in 1974, the burial mound was restored to its original shape and people can now visit the site. The importance of L'Anse Amour Burial was recognized in 1978, when it was made a National Historic Site.