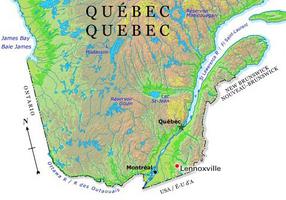 Lennoxville, Qué, Town, pop 4963 (2001c), 4691 A (1996c), 4046 (1991c), area 27.81 km2, inc 1920, is located in the Appalachians on the Rivière SAINT-FRANÇOIS, at the confluence of the Rivière Coaticook, 5 km southeast of SHERBROOKE. Originally it was called Nikitotegwasis, or "little river which forks," by the Abenaki and Little Forks by the first settlers. Its current name derives from either the surname of a settler's family or that of Sir Charles Lennox, the 4th duke of RICHMOND and the governor-in-chief of British North America (1818-19).

The Abenaki and the French missionaries often used the site because it was a focal point for canoes and small boats using the tributaries of the Saint-François. A sawmill and forest products plant (lumber and potash) preceded the founding of the first village by LOYALISTS around 1794. From 1860 to 1950, there was some copper mining in the region. The development of road and rail networks (1810-84) brought copper manufacturing (1903), asbestos (1935) and, more recently, maple syrup industries.

Located here are a CEGEP, Champlain College (established 1971), Bishop's College School (established 1836), and BISHOP'S UNIVERSITY (established 1843), which attracts students from across Canada and the US. The federal Department of Agriculture installed a research farm in 1914 that is now dedicated to stock-farming. The town is the centre of activities for the anglophone community in the EASTERN TOWNSHIPS. The regional Uplands Museum is located in a neo-Georgian house (1862).