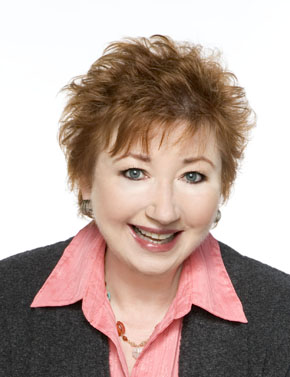 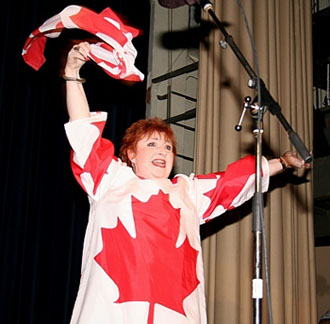 Luba Goy, actor, comedian (b in Germany 8 Nov 1945). Luba Goy is a member of one of Canada's most popular and enduring comedy troupes, Royal Canadian Air Farce, and is one of the nation's most talented comedic actors.

Born of Ukrainian parents in Germany, en route to Belgium, Goy immigrated to Canada with her family in 1951 and grew up in Ottawa. After graduating from Montréal's National Theatre School in 1969, Goy worked in a young-actors school-tour offshoot of the Stratford Festival before joining the improvisational comedy ensemble The Jest Society in 1971, performing alongside future Air Farce colleagues John Morgan, Roger Abbott and Don Ferguson. Dave Broadfoot joined the group when The Jest Society became the Royal Canadian Air Farce, and they made their first appearance on CBC radio in 1973. Their CBC radio show continued for 24 years. After a brief run as a series in 1981 and specials in 1982-83, Royal Canadian Air Farce became a regular staple on CBC television. From 1983 to 2008 it was one of the network's most popular shows.

While she is most strongly identified with her work on Air Farce, Luba Goy is also an accomplished stage actress and has performed in a variety of productions, including The Vagina Monologues in Toronto in 2001 and The Fellini Radio Plays at the Stratford Festival in 2002. She has worked on a variety of film and television projects, including a role in an educational series on TVO called Bits and Bytes (1983) with comedian Billy Van, appearances in the sketch comedy series Bizarre (1980-85), voice-over work in the animated series The Care Bears (1985-88), and work in the feature film Vidma (1990).

Goy has won many awards and has received several honours as a member of Air Farce, including the Gemini Humanitarian Award, the Governor General's Performing Arts Award, 15 ACTRA Awards, a Juno, and a star on Canada's Walk of Fame. In 1993, she was awarded an honorary doctor of laws degree by Brock University in St Catharines, Ont. In 1996, she was a recipient of The Women in Film and Television Award for outstanding achievement.

Luba Goy is also known for her charity work and her fundraising efforts. She is proud of her Ukrainian heritage and has hosted and participated in many Ukrainian festivals and cultural events.