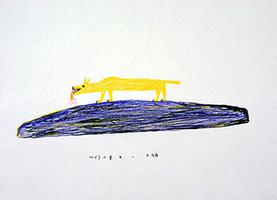 Throughout his childhood and young adulthood, Anguhadluqlived in the Back River area of the North West Territories. When he was a young boy, his family reportedly reached an agreement that he would marry his cousin Jessie Oonark, but they were never married. Over the course of his life Anguhadluq had three wives, one of whom was the artist Marion Tuu’luq, and seven children that survived to adulthood, including two adopted sons. By 1953, Anguhadluq had gained a reputation as a great hunter and was the respected leader of a traditional Utkuhikhalingmiut patrilineal camp that was home to his extended family. In the late 1950s a famine struck the Back River area, forcing Anguhadluq and his family to relocate his camp to Schultz Lake. Soon after, they relocated to Whitehills Lake before permanently settling in Baker Lake in 1961. Anguhadluq was known for being dedicated to retaining a traditional life on the land, even after he moved into Baker Lake. Until 1967, when he was 72, Anguhadluq maintained residence in an igloo during the winters and lived in a tent during the summer months.

Once he moved into Baker Lake, Anguhadluq and many Utkuhikhalingmiut began to spend time at the craft shop and to embrace the artistic materials available there. His talent was recognized quickly after he started creating drawings and sculptures. Over the course of his artistic career he created many drawings, some of which became prints, as well as sculptures. Anguhadluq’s works tend to capture images from his life on the land. They may feature animals without people, a lone figure hunting or fishing, or community and camp life. When drawing, he often sat on the ground, laying the paper between his outstretched legs and turning the drawing as he worked, conceiving his image like a map, looking down on his subject, with one continuous horizon line formed by the edges of the paper. His most famous works are those capturing the drum dance.

Before he died in 1982, he refused to be buried in the Baker Lake Anglican cemetery, instead requesting that he be buried on his favourite viewing hill overlooking Baker Lake, where so often he had searched the horizon for caribou.