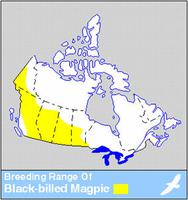 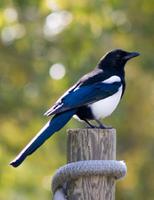 The magpie's tail makes up over half of its total length (photo by James Marsh).
PreviousNext

Magpie is a common name for birds of several genera in the crow family. Some 20 species are known worldwide; however, only the black-billed magpie (Pica hudsonia) is found in Canada.

The black-billed magpie retreated from many parts of its former range in North America when the large herds of bison disappeared. Bison carrion was an important food source and the live animals carry ticks, which magpies dined upon while sitting on their backs. This bird has since made a comeback through an increasingly close association with humans and their habitats. This permanent resident breeds from southern Yukon to western Manitoba, wandering farther east in winter. In recent decades, magpies have extended their range northward into the Northwest Territories.

Magpies possess relatively heavy bills and short, rounded wings with markings forming a conspicuous white patch when extended. Their long, graduated tails often make up over half their total length of some 50 cm. Magpies are black with iridescent metallic blue-green tones to their wings and tail, and contrasting white scapulars (feathers at the base of the wing) and underparts.

The black-billed magpie is an opportunistic and omnivorous feeder, whose diet consists mainly of ground-dwelling arthropods, seeds and carrion, which it obtains on the ground in open areas, rarely in trees. The bird has a symbiotic relationship with large ungulates (bison, elk, moose, cattle, etc) for it eats blood-sucking ticks from the large animals. They occasionally prey on other birds and their nests, but this forms only a small proportion of the magpie's diet.

The large nests of magpies require about six weeks for construction, and are composed of a domed mass of sticks with one or more entrances leading to a cup of mud. Usually 4-9 greenish grey eggs blotched with brown are incubated by the female. Some mating pairs remain together for life.