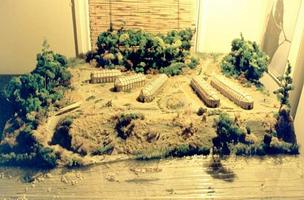 Historical model of the Mandeville Iroquoian village in Tracy, QC, created on the basis of archaeological findings and interpretations (photo and production Michel Cadieux, Archéofact.ca). 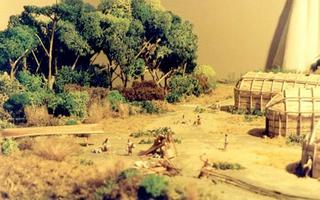 The Mandeville and Lanoraie archaeological sites are located downstream from Montreal. The first site is found along the Richelieu River in the city of Tracy, while the second lies on a terrace some distance from the St Lawrence River, in the municipality of Lanoraie. Both sites are in a sandy environment well suited to horticulture as it was formerly practiced by the Indigenous sedentary groups who inhabited the area.

The Mandeville and Lanoraie sites are linked to the St Lawrence Iroquoians, a group of farmers who occupied the area between 1200 and 1600 AD and whose territory extended from the mouth of Lake Ontario to the vicinity of Quebec City.

The Mandeville Site was discovered in 1961 in the town of Tracy, on the property of a resident after whom the site was named. The site consists of a small village including at least four longhouses sheltering about 250 people. The village covered an area measuring approximately 100 meters long by 60 meters wide and revealed multiple and scattered evidence of occupation including reddish hearth residues, storage or refuse pits and postholes that outlined the structure of the houses. Radiocarbon dating indicated that the site was occupied during the Late Woodland Period, between 1500 and 1525 AD. This dating is validated by the style of pottery containers, which clearly indicates that the site is recent.

The Mandeville site is distinctive because it stands right on the banks of a major river, while most other sites related to the St Lawrence Iroquoians are located on the tops of hills, a few kilometers away from significant navigable waterways. The site also revealed one of the largest collections of pipes found at an Iroquoian village of this period. Noteworthy is the presence of a surprising variability of effigy pipes, with bowls that incorporate a pattern or a form resembling a human or an animal figure such as a dog, a bird or a reptile. The site was classified heritage property in 1975.

The Lanoraie Site was discovered in 1927 by Ontarian archaeologist William Wintemberg. Although it is poorly documented, its size is comparable to the Mandeville site and suggests the site was a small village consisting of a few longhouses. Only one of these was the subject of intensive research, which started in1970 and lasted three years.

The excavated remains of occupations revealed a habitation measuring 29 m in length by six m in width. Some 233 postholes reflected the scale of the structure, whose inner enclosure included seven hearths located at regular intervals along the central axis. More than 140 pits were identified around the hearth areas. These varied in function: some were used as refuse pits for the ashes and coals that resulted from cleaning the hearths; there were refuse pits containing only food residues, corn or skeletal remains; pits filled with pottery fragments; and pits that were completely empty and were probably used for temporary storage or contained products that decomposed rapidly.

It was initially suggested that the Lanoraie Site was occupied around 1350 AD, but the style of the pottery recipients rather indicate an Iroquoian presence there during the 15th century. In fact, the recent excavations of the McDonald site, which dates from 1320 AD and is the oldest St Lawrence Iroquoian village so far discovered, provided elements of comparison for refining the unreliable chronology obtained from radiocarbon dating at Lanoraie. Unfortunately, the Lanoraie Site was the object of multiple "treasure hunts" in the 1930s, which altered the archaeological record and removed important information concerning settlement patterns.

The Mandeville and Lanoraie sites, along with the Beaumier and Bourassa sites both located near the mouth of the Saint-Maurice River, form a distinct geocultural province gravitating around Lac Saint-Pierre. It was given the name "Maisouna" by archaeologist Claude Chapdelaine from the University of Montreal.