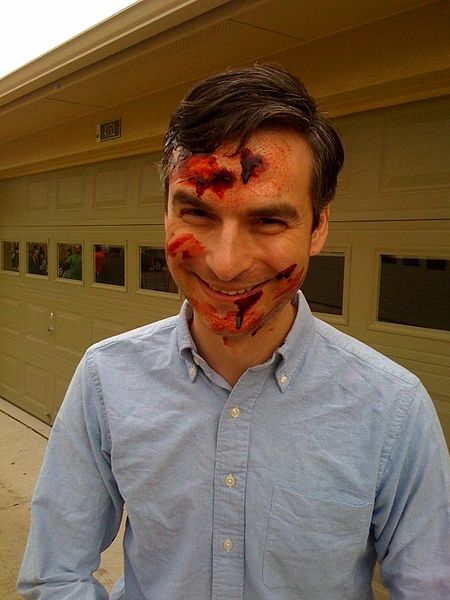 Marcel Dzama, visual artist (born 1974 in Winnipeg, MB). Marcel Dzama is a contemporary artist best known for his pen-and-ink drawings, which feature human figures preoccupied by a sinister, otherworldly cast of flora and fauna. His work has been shown in over 60 solo exhibitions since 1997, when he received a Bachelor of Fine Arts from the University of Manitoba, and is held in numerous public collections, including the Andy Warhol Foundation for the Visual Arts (New York), the Museum of Modern Art (New York), the Dallas Museum of Art (Dallas), the Musée d’art contemporain de Montréal, the Museum of Contemporary Art (Los Angeles), the National Gallery of Canada (Ottawa), and the Tate Gallery (London).

Marcel Dzama was born in Winnipeg, Manitoba , a city that Dzama described as “ghostly” in a 2013 interview. Born when his mother was 17 years old, Dzama is the oldest of three children. Dzama’s father worked as a baker at a branch of Safeway — a supermarket chain popular across Western Canada — throughout his childhood, and decided to name his son Marcel after seeing the name inscribed on a locker at work. During his elementary and high school years, Dzama turned to drawing as a refuge from the stress that he experienced at school from low reading comprehension due to an early diagnosis of dyslexia. His teachers frequently confiscated the sketches that he would produce in lieu of paying attention to his lessons.

In 1997, Dzama received a Bachelor of Fine Arts from the University of Manitoba in Winnipeg. In 1996, while he was still pursuing his degree, he co-founded the Royal Art Lodge, an artist collective established out of Winnipeg, with artists Michael Dumontier, Neil Farber, Drue Langlois, Jon Pylypchuk and Adrian Williams. The majority of the collective’s work comprised small-scale drawings and paintings, many of which included text. In 2003, the Royal Art Lodge’s work was exhibited, to significant acclaim, in a show co-curated by Wayne Baerwaldt and Joseph Wolin, entitled “Ask the Dust.” The show was hosted by the Power Plant Contemporary Art Gallery in Toronto and the Drawing Center in New York City.

Shortly following graduation from the University of Manitoba, Dzama participated in a group exhibition in Los Angeles, in addition to holding his first solo exhibition at the Richard Heller Gallery in Santa Monica. At this time, his corpus principally comprised drawings rendered in pen, ink, and a diluted root beer concentrate that, once dried, was evocative of blood. Dzama’s solo exhibition garnered critical acclaim. Notably, Jim Carrey and Nicolas Cage both purchased his work on the strength of the exhibition. Dzama’s drawings were next shown at the Berlin Art Fair, where they attracted the attention of David Zwirner, the owner of a private gallery in New York City (David Zwirner Gallery has since expanded, and now boasts a location in London in addition to two locations in New York City). In 1998, Zwirner exhibited 300 of Dzama’s drawings at his SoHo gallery and has since become Dzama’s representative.

In 2003, Dzama founded a second artist’s collective that he designated the Royal Family. Its members included his sister and mother Hollie and Jeanette Dzama, his uncle Neil Farber, and artist Shelley Dick, whom he would marry that same year. Like the Royal Art Lodge, the Royal Family primarily produced drawings. The collective’s work was exhibited at the Richard Heller Gallery in 2004. That year, Dzama and Dick relocated from Winnipeg to New York.

Since his move to New York, Dzama’s work has been widely exhibited internationally, at institutions that notably include the Musée d’art contemporain de Montréal, the National Gallery of Canada (Ottawa), the Museum of Modern Art (New York), MoMA PS1 (Long Island City), the Dallas Museum of Art, and the KW Institute for Contemporary Art (Berlin). He has participated in a variety of commercial collaborations, principally with musical acts. Dzama produced the cover art for a number of major music albums, including the Weakerthans’ Reconstruction Site (2002), Beck’s Guero (2005), and They Might Be Giants’ The Else (2007). He also contributed to the art direction for Arcade Fire’s short film Scenes From The Suburbs (2011) and co-directed the music video for the Department of Eagles’ “No One Does it Like You” (2009). As evidenced by this recent work, Dzama’s range of artistic media has expanded over the course of the past decade to include photography and film, as well as sculpture, collage, and painting.

In 2012, the National Gallery of Canada acquired Dzama’s video work A Game of Chess (2011), which features life-size kings, queens, rooks, and pawns in a battle set in Guadalajara, Mexico. In the fall of 2014, Dzama presented his latest film Une danse des bouffons (or A jester’s dance) alongside both two and three-dimensional work as part of a solo exhibition held at David Zwirner Gallery’s two New York locations. He is also involved in collaborative projects and exhibitions with renowned punk sketch artist Raymond Pettibon.

In 2016, Dzama created both the costume and set design for the New York City Ballet’s The Most Incredible Thing based on the Hans Christian Andersen fairytale of the same name.