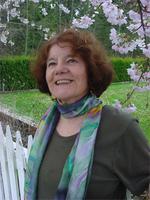 Margaret Hollingsworth's work focuses on dislocation, sometimes associated with movement across space (immigration, uprooting), sometimes with a kind of inner migration or exile. For her, deracination is juxtaposed with a strong feeling for home, the space that many of her characters struggle toward, though they don't always manage to arrive safely. Her theatrical work frequently enacts this theme through its daring and sometimes bizarre structure, where the action is fractured in time and space and the language of the characters tends to be oblique and fragmented.

Perhaps this sense of the importance of, and search for, home arises partly from her own experience of immigration, as well as from her sense of the vastness and diversity of her adopted country. During World War II, she was shifted between London and Sheffield, with time spent in the country to avoid bombing raids. Later, working as a librarian in Thunder Bay, she began to write in earnest (she had been composing and improvising plays since childhood), and after a few years made her way to the West Coast. Living on Galiano Island for several years, she plumbed the psychology of self-exile and back-to-the-land idealism in plays such as Alli Alli Oh (1977) and its sequel, Islands (1983). Those plays, like so much of her work, deal with the lives of women. Pairs or triads of women frequently occupy her theatrical world, from Operators (1974) to Ever Loving (1980), with its trio of war-brides, to In Confidence (1994), which consists of 2 monologues set one after the other and traces the complex friendship of 2 middle-aged neighbours after one has moved from Toronto to the West Coast.

Another mark of her work is its humour, which is often combined with a whimsical and deft theatricality. On the page, her plays sometimes seem strange or difficult to come to terms with, but in performance they make people laugh and reveal their author's keen sense of stagecraft.

As she has matured, Margaret Hollingsworth has turned to the lives of older women for her subject matter. Spanish Dancing in a Cold Climate (2006 ) presents a successful middle-aged career woman infatuated with a young Mexican immigrant while attending to a cranky mother recently arrived from England. Her novel, Be Quiet (2004), which exemplifies her interest in unusual pairings, matches painter Emily CARR with Frances Hodgkins, a New Zealand artist who was Carr's exact contemporary. The action moves from France to the United Kingdom to the West Coast of Canada, and traces not only the intersection of the lives of Carr and Hodgkins but the world of a contemporary woman, also an artist, caught up in a family drama that links to the story of the earlier characters. As in her plays, the timeline is dislocated and the action discontinuous; and here again, as in many of her plays, notably the powerful War Babies (1984), Hollingsworth traces the struggles of women artists in a not always welcoming environment. Her own work as a feminist artist represents these difficulties with thoughtfulness and verve.

Margaret Hollingsworth's innovative style has caught the attention of several awards panels: she has been a finalist for the GOVERNOR GENERAL'S AWARD (for War Babies in 1984) and received both a CHALMERS and Dora Mavor MOORE Award for Ever Loving (1980) as well as a Jessie Richardson Theatre Award for Ring of Fire (1995).