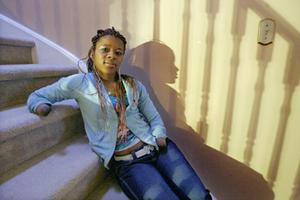 Mariatu Kamara, war survivor, amputee, activist and author of the memoir The Bite of the Mango (photo courtesy Annick Press).

Mariatu Kamara grew up in the village of Magborou in Sierra Leone, Africa, living with her extended family in a home led by her aunt and uncle. Most of Kamara’s life in Sierra Leone was shaped by the country’s civil war (1991–2002). In 1999, at the age of 12, Kamara was raped and impregnated by a family friend whom she was being pressured to marry; shortly afterwards, her village was attacked by armed rebels with the Revolutionary United Front. During this attack, child soldiers cut off Kamara’s hands and she witnessed the killing of many family friends, including the man who had impregnated her.

After the attack, Kamara lived in the Aberdeen Road amputee camp in Freetown with other members of her family. While living at the camp, Kamara survived by begging from wealthier Sierra Leoneans in Freetown. Her son died at 10 months of age due to malnutrition. After foreign journalists visited the camp and interviewed Kamara, her story began to garner international interest. In 2002, she was sponsored by a family to move to Toronto.

Shortly after arriving in Canada, Kamara was granted residency for humanitarian reasons (see Refugees). She began a formal education, first earning an English as a second language diploma and then completing secondary school. In 2008, Kamara enrolled in the Assaulted Women & Children’s Counsellor/Advocate Program at George Brown College in Toronto.

The Bite of the Mango

In 2008, Kamara published a memoir (see Autobiographical Writing), The Bite of the Mango, about her life in Sierra Leone and her first years in Canada. Written with journalist Susan McClelland, the book was given its title because a bite of a sweet mango was the first food Kamara ate after she lost her arms. A man she met along her way through the countryside offered the mango to her and, although he tried to hold the fruit for her, Kamara was determined to hold it herself. This incident affirmed Kamara’s desire to live through this terrible point in her life. The Bite of the Mango has won several awards, including the Silver Award for Young Adult Nonfiction from Foreword Reviews (2008) and Norma Fleck Award for Canadian Children’s Non-Fiction (2009), and made the IBBY Outstanding Books for Young People with Disabilities List (2011).

Since moving to Canada, Kamara has toured with Free The Children and UNICEF Canada to promote equal rights for women and the importance of education. Currently, she is UNICEF Canada’s Special Representative for Children in Armed Conflict, giving presentations on the impact of war on children.

Although Kamara acknowledges that it is difficult to speak about her experiences in the war, she does so because she hopes it can make a difference for children still living in war-torn regions. Kamara’s public reflections on her life in Sierra Leone have also allowed her to forgive the actions of the rebel soldiers who cut off her hands: “I just think it’s time to let go... Forgive them. They are also our brothers. They suffered, too.”

In 2009, Kamara was named a Voices of Courage Honoree by the Women’s Refugee Commission. She also established the Mariatu Foundation, which seeks to provide refuge for women and children in Sierra Leone by creating shelters for the abused.