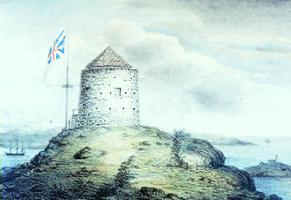 During 1813 Royal Engineers and local military built this massive Martello tower on a hill above the harbour of Saint John (courtesy Library and Archives Canada).

Martello tower is a distinctive masonry fortification used in defence of British North America in the first half of the 19th century. The name is likely derived from references to a stone tower on Cape Mortella in Corsica, which had proven particularly resistant to an English attack during the French Revolutionary Wars. Round towers had begun to replace square towers about the year 1000 AD, reflecting improved skills of masons. The advantage was that a round tower offered fewer blind spots to shelter an attacker and better deflected projectiles.

The 16 squat, flat-roofed towers built in British North America from 1796 to 1848 were distributed as follows: Halifax (5), Saint John (1), Québec City (4) and Kingston (6). The towers were built during times of tension with the United States. The ones at Halifax and Québec City were built in the years leading up to the War of 1812, and the one at Saint John was built during that military conflict (see Carleton Martello Tower National Historic Site). The Kingston towers, constructed 1845-48 at the height of border tensions with the US, were the most complex in design. None of the towers was ever subject to attack; 11 have survived. 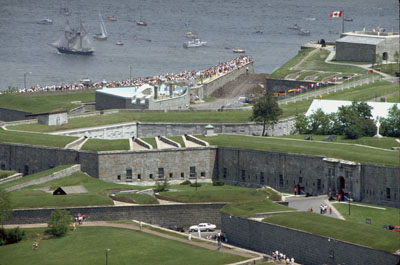