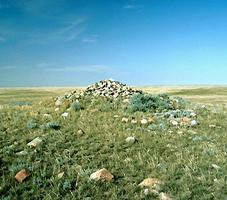 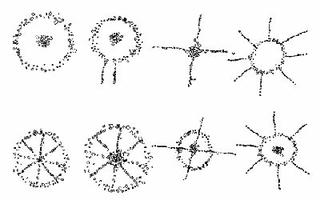 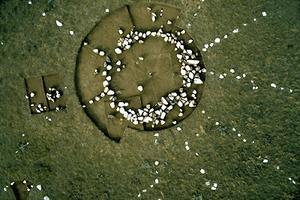 The term medicine wheel is not an Aboriginal term, but was initially used around the turn of the century by Americans of European ancestry in reference to the Bighorn Medicine Wheel located near Sheridan, Wyoming. Later archaeological research on the Plains Aboriginal People identified other features characterized by a variety of stone circle, cairn and spoke configurations. Because of general similarities to the Bighorn Wheel, the term medicine wheel was extended to describe them as well.

Structures referred to as medicine wheels generally share the following characteristics: 1) They were largely constructed of unmodified, locally available natural stone; 2) they consist of a combination of at least two of the following primary components: a prominent central cairn; one or more concentric stone rings, two or more stone spokes or lines that radiate outward from a central origin point, a central cairn, or the margins of a stone ring; 3) the above primary components are arranged in a radially symmetrical manner.

Over 70 structures classifiable as medicine wheels have at present been identified. All are found in the northern Plains from Wyoming and South Dakota north to the Canadian Plains of Alberta and Saskatchewan. Most medicine wheels have secondary features associated with them. These include stone Tipi rings, small ancillary stone cairns, stone hearths and anthropomorphic effigies (see British Block Medicine Wheel and Tipi Ring Campsite). Medicine wheels also vary widely in size. The Bighorn Medicine Wheel consists of a central stone cairn 4 m in diameter surrounded by a stone circle 27 m in diameter. Approximately 27 stone spokes connect the stone circle with the central cairn. In contrast, the Ellis Medicine Wheel in southern Alberta consists of a tipi-ring-sized stone circle 5 m in diameter from the outer wall of which 10 stone spokes radiate outward in all directions for distances of from 14 to 19 m.

The limited archaeological and ethnographic evidence now available indicates that medicine wheels reflect a broad range of ages, cultural associations and functions. Several of the structures were clearly constructed and used over long periods of time by peoples representative of several cultural complexes. Other medicine wheels represent single-use events. The earliest evidence for use of medicine wheels is by Oxbow Complex peoples dating from 4500 - 5000 BP. Ethnographic accounts indicate one style of medicine wheels, such as the Ellis Wheel described above, date from the late prehistoric to historic period, and were constructed by the Blackfoot as memorials to prominent warriors at the time of their death.