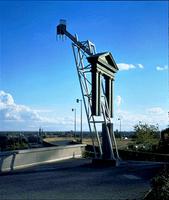 Melvin Charney, artist and architect (born at Montréal, 1935; died there 17 Sep. 2012), studied at the School of Art and Design, Montréal Museum of Fine Arts; McGill University, School of Architecture, 1952-58 (B Arch); and Yale University School of Art and Architecture (M Arch), 1959. Between 1961 and 1964, Charney worked in Paris and New York, returning to Montréal in 1964, where he established an architectural practice and began to teach in the architectural department of the UNIVERSITÉ DE MONTRÉAL, supervising the graduate program between 1966 and 1970. Since then, Charney has been involved in a series of projects addressing a variety of themes, often bringing together the fields of art and architecture and taking both a celebratory and critical look at the urban environment.

Trajectory Away From Conventional Practice

Charney's first independent project was a school built at Lac Beauport, Qué, in 1964. In 1970 his proposal for the Canadian pavilion for the Osaka World Fair, although not selected, received wide acclaim. This audacious project, however, constructed from construction equipment (cranes, scaffolding, etc), marks the beginning of his trajectory away from the conventional practice of architecture. In 1972, he organized an influential exhibition exploring the impact of development on the quality of urban life, Montréal plus ou moins, at the MUSÉE DES BEAUX-ARTS DE MONTRÉAL. Participating in the controversial "Corridart" project in which a group of Montréal artists created interventions along the city's principal boulevard during the 1976 Olympic Games in Montréal, Charney became infamous as a focus of conflicts with the city's Drapeau regime (see Jean DRAPEAU). With a project involving a temporary facade erected at one of the principal intersections of the city, he sought to "restore" a missing fragment of the urban fabric destroyed during the rampant demolition of historic buildings during that era. The work, again using ephemeral construction materials, was demolished by irate civic officials, precipitating an international scandal and a series of acrimonious legal suits.

By the early 1980s, the critique of urban alienation inherent in Melvin Charney's work deepened as he began exploring the "modernism" of totalitarianism. He started a series of works representing the railways, death camps and crematoria of the Third Reich, the infrastructure of the Holocaust. In these drawings and installations, the industrialization of genocide becomes an extreme metaphor for the alienation of modern society.

Between 1978 and 1989 in a series of site-specific installations in Canadian, American and European cities, Charney continued his critique of the modernist decontextualized city through temporary constructions evoking occluded urban histories. Later, and in contrast to these ephemeral structures, Charney created several commissioned monumental structures for permanent public spaces. His Canadian Tribute to Human Rights in Ottawa, unveiled by the Dalai Lama in 1990, was the first monument in the world dedicated to universal human rights

Melvin Charney's most popular work is arguably the Canadian Centre for Architecture (CCA) Garden in Montréal. Designed and built in 1987-88 as part of the Quebec government's competition program for the integration of art and architecture, the work combines sculpture and public space on a site granted to the CCA by the City of Montréal. The Garden is laid out as a series of narrative episodes - Orchard, Meadow, Arcade (mirror of the Shaughnessy House), Esplanade, Belvedere, and Allegorical Columns - that address both the history of architecture and that of Montréal. In the same city, Charney's 1992 sculpture, Skyscraper, Waterfall, Brooks - a Construction at Place Émilie-Gamelin (a major gathering place informally known as Berri Square), boldly challenges traditional ways of perceiving nature in urban spaces.

From September 2003 to January 2004, the Canadian Museum of Contemporary Photography exhibited many of Charney's photographs, works on paper, and sculptures to illustrate the scope of his accomplishments since the 1960s.

Melvin Charney has received wide international acclaim as a teacher and architectural theorist. As an artist he has had his work presented in prestigious international contemporary art events such as the Venice Biennial and Documenta in Kasel, as well as in numerous solo and group exhibitions in museums around the world. In 2008, the exhibition Between Observation and Intervention: The Painted Photographs of Melvin Charney, organized by the Musée national des beaux-arts du Québec, was displayed at the Americas Society in New York City.