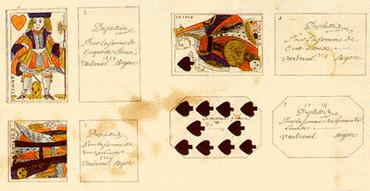 Card money was invented to overcome a currency shortage in New France. When the king's ship arrived, it was redeemed in cash (courtesy Library and Archives Canada/C-17069)

Michel Bégon de La Picardière, INTENDANT of New France 1712-26 (b at Blois, France 21 Mar 1667; d at La Picardière, France 18 Jan 1747). When he arrived, the economy of New France was suffering from depression in the beaver trade and inflation caused by the use of PLAYING-CARD MONEY. His superiors accepted Bégon's proposal to redeem the card money in instalments, at half face value. He failed in attempts to liberalize the fur trade and to establish industries capable of overcoming the colony's deficit. Extensively involved in private trade and suspected of embezzlement, he was recalled to France in 1723.
×