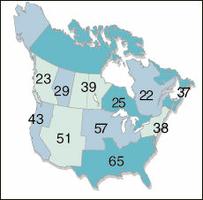 Millenarianism (from the Latin mille for "thousand" and annus for "year") is a term whose religious significance derives from Revelation 20:1-6, where John predicts that Satan will be bound for 1000 years. In Christian theology, millenarianism refers to the expectation of the Kingdom of God on earth, in which the returning Christ will rule the earth for 1000 years before the Last Judgement puts an end to history altogether. Although part of the inheritance of all Christian groups, this doctrine has been pushed into the background by most of the larger churches. In contrast, it is vital to many smaller sects active in Canada such as the MORMONS, JEHOVAH'S WITNESSES and SEVENTH-DAY ADVENTISTS.

Historically, expectation of millennial deliverance has become particularly intense at times of great social stress, such as the Crusades or Black Death in medieval Europe or the Protestant Reformation. It is in such a context that one should place Louis RIEL, who preached a message of millennial salvation to the Métis of Canada as their society was being overwhelmed by white immigration.

Originally a Judeo-Christian concept, millenarianism is now applied by anthropologists and sociologists to parallel phenomena in non-Christian settings, eg, the Ghost Dance of 1890, when many Plains Indian tribes anticipated the destruction of the white man, accompanied by the rejuvenation of the earth and the return of the buffalo in unprecedented numbers. Among thousands of such movements are the "cargo cults" of Melanesia, the Nation of Islam in the US, the Rastafarians of Jamaica (now also in Canada), the followers of the People's Temple who committed mass suicide in Guyana in 1978, and the Aum Shinrikyo movement, which released nerve gas in the Tokyo subway system in 1995.

A closely related concept is "messianism." Strictly speaking, messianism refers to a doctrine or movement featuring an individual Messiah, whereas millenarianism is a broader term encompassing expectations of collective salvation; but in practice the 2 terms are often used interchangeably. The concept of messianism is often employed metaphorically in discussions of Québec history to designate the sense of mission deeply embedded in French-Canadian culture. In the 19th century, this was the desire to evangelize the North American continent in the Roman Catholic religion; in the 20th century, it is the desire to foster the French language and culture.

Some authors also use the terms millenarianism and messianism to refer to ideologies such as Marxism, fascism, deep ecology and radical feminism, all of which posit the fundamental transformation of society through political action. This usage, while also metaphorical, highlights important similarities between religious and political movements. It also appears in the racist Christian Identity movement, whose adherents believe that people of Northern European ancestry, particularly white Americans, are descendants of the 10 lost tribes of Israel. The Aryan Nations and other offshoots of Christian Identity operate in Canada as well as in the US. Similarly there is an aspect of secular millenarianism in the many New Age cults and movements flourishing toward the end of the 1990s.