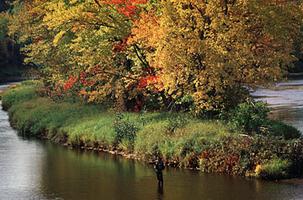 The Miramichi River is 217 km long from its source in Juniper, in central New Brunswick, to the Gulf of St. Lawrence. Its 2 branches, the Southwestern and Northwestern Miramichi, join at Beaubears Island, near Newcastle, NB. Seaward from here, and throughout the open shallow Inner Bay, river water forms a fresh, lighter layer on top of saltier denser water. This is the picturesque Miramichi Estuary, formed some 4000 years ago when currents and waves built a barrier of sand islands across the drowned, ice-deepened valley in the soft sandstones and shales of the Pennsylvanian age. The effect of the sea is felt as far as 65 km inland at Redbank as a regular rise and fall in the river flow.

Since their settlement by Acadians after the fall of Louisbourg and by English lumbermen, later turned shipbuilders, the scenic shores have been the focus of the dual economic life of fishing and forestry. Besides the legendary Atlantic salmon run - the foremost in eastern North America before its devastation by overfishing, pollution and unknown causes - smelt, gaspereau, shad, eel, herring, mackerel and lobsters are exploited. Formerly, extensive log rafts plied the river's waters; now major forest industries at Chatham and Newcastle depend on the Miramichi for shipping and effluent disposal.

The spirit and independence of the Miramichi inhabitants are characterized by their survival, sometimes immersed to their necks in river water, of the Great Miramichi Fire (1825) in which 200 people died and almost one-quarter of New Brunswick's forests were burned. The obverse side of this individualism is the salmon poaching notorious along the length of the river.

The name, which may be the oldest recorded name of native origin in Canada, may come from the Montagnais word for "country of the Micmac."